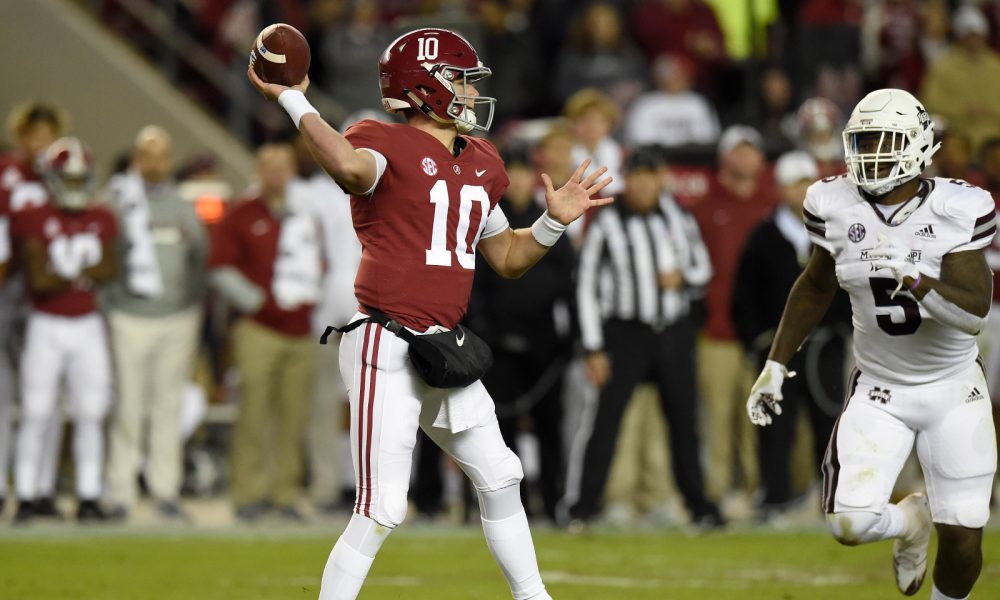 A lot of questions were answered on Saturday night when Alabama unleashed the “Mac Attack” on Arkansas. Read how Mac Jones quieted the naysayers and won big.

Earlier this season I wrote that Saban was holding his cards close to his vest as far of play calling goes. He hasn’t shown his defensive stunts and aside from one trick play last week after Tua was injured and Alabama scored on a wildcat pass, they haven’t shown anything but vanilla offense for most of the season.

There were many who thought that Alabama may need to do some tricks to get the offense going against Arkansas with a first time starting quarterback. But that was not the case. Alabama continued to run its vanilla offense, not asking Jones to do too much, relying on his running backs and his star receivers to be the stars they are and simply put the ball in their hands and let them do the rest.

The “Mac Attack” scored on all their first half possessions and the defense stepped up with points of their own. While Alabama may have been missing the most important cog in the machine that is Alabama, the machine chugged along like the well oiled machine it is.

Maybe to reward Jones for his sterling play in the first half, offensive coordinator Steve Sarkisian gave Jones a little sugar and let him throw a bomb which was caught in perfect stride by Jerry Jeudy for the first touchdown of the second half.

Now you know why Saban and so many other people inside and outside the program who know it well,have always said they had faith in Jones should it come down needing him to keep them in the win column.

Perhaps Jones’ main good point is that he can shake off a bad play, not that he had many of those on Saturday night in Tuscaloosa. After all, before going out to allow Taulia Tagovailoa some reps, he was 18 for 22 for 235 yards in barely over two quarters. He was on target to pass for upward of 400 yards against the hogs. this is even more impressive when you consider that two balls intentionally thrown away and was was dropped by the receiver makes these numbers even more impressive.

And before you say that this is Arkansas after all, when Taulia came in, he went in and quickly with Alabama’s first punt of the game. Therefore you can’t say that any Alabama quarterback could match those numbers and those results. In fact Taulia never took the team on a scoring drive in almost the entire second half he played.

Overall though, no matter how inspiring Jones’ play was against Arkansas, to have their best chance against LSU, Alabama will need Tua to give them the best shot to topple those Tigers. However, should Alabama build up a lead, given Jones’ performance on Saturday night, they would have little hesitancy in letting Jones come in and finish things up to give Tagovailoa more rest.

But tonight, no matter what else happens for Jones in his Alabama career, he can go to his grave telling folks that he was a starting and a winning quarterback at Alabama right in the height of the Nick Saban Dynasty and for that the fans at Alabama should give him his due and thank him. He certainly earned that tonight. This was the night the “Mac Attack” was let loose with great success for everything in Crimson and he was a hero.