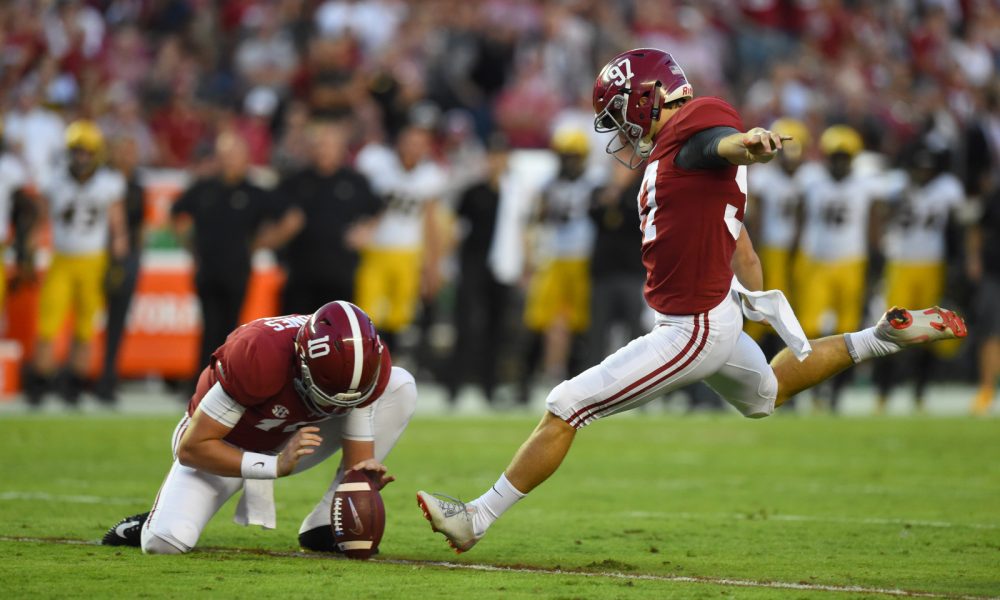 The loss of Will Reichard to a hip injury has certainly bothered Alabama fans this season, especially with how highly-touted he was as a kicker at Hoover (Ala.) High School.

He declared that he was the one to ‘end the kicking woes’ for the Crimson Tide; however, the coaching staff has been taking things slowly with him.

Joseph Bulovas had to resurface and handle all responsibilities in the kicking game and thus far, he has been steady to say the least.

After making a pair of field goals versus Arkansas – prior to the bye week – the sophomore has connected on five of seven attempts and nailed all but one extra point in 30 tries.

A native of Louisiana, Bulovas had issues with his nerves in 2018 – seeing as how he missed six point after touchdown tries and four field goals.

He, like Reichard, was one of the nation’s top kicking prospects in the 2017 class. Bulovas has the tools to be successful as a specialist and per Nick Saban on Wednesday, he said the Alabama kicker needed to be ‘comfortable in his own skin.’

He may not have the dynamic leg that Reichard carries, but all Tide fans want is consistency from Bulovas.

If he can step up on Saturday versus LSU and make the kicks in various situations, he will have done his job.

Another thing for him will be creating touchbacks.

The Tigers have playmakers in the return game and being able to control where they go on the field, as well as give the coverage time to make plays, is huge for Bulovas. He is growing confident in who he is and it will only rise with a solid performance at home this weekend.