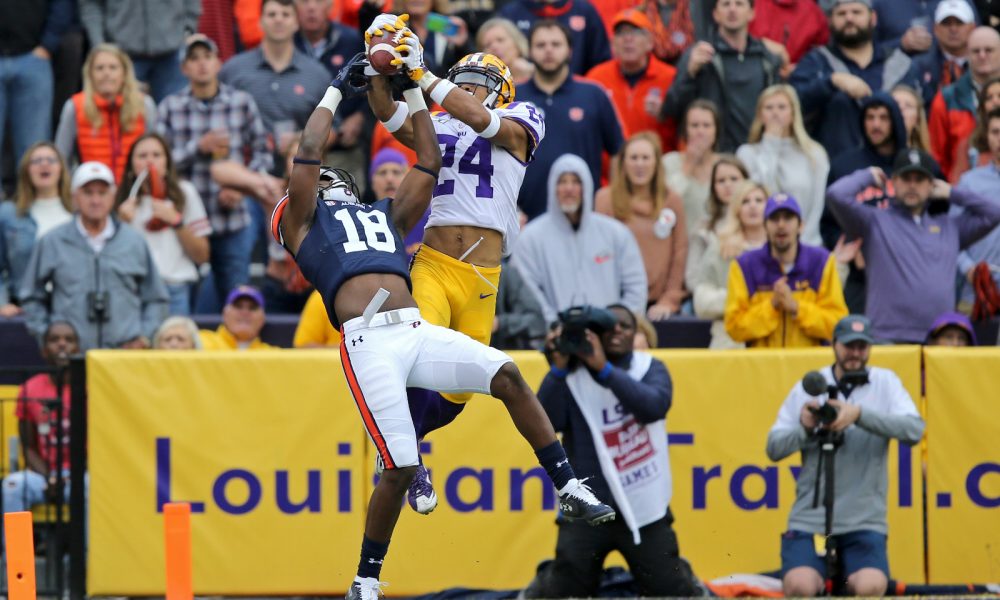 He was once the head coach of the Louisiana State University, so Nick Saban knows the program Alabama is facing on Saturday. Players on this year’s Crimson Tide team can care less about the eye candy on campus, in terms of media personnel and distinguished visitors, as their main focus in on disrupting one the nation’s top offenses along with giving a strong effort.

While he continues to play mind games with everyone about Tua Tagovailoa, Saban named a pair of student-athletes from the Tigers that bring much confidence into the matchup.

He was not the main running back in 2018, but Clyde Edwards-Helaire made a critical impact – averaging close to five yards a carry. As a junior, he is the “go-to” rusher and with the attention applied to Joe Burrow, Edwards-Helaire has improved to almost totaling six yards per attempt.

In meetings with Florida and Auburn, Edwards-Helaire got stronger as the game went on. He tallied 10.3 yards per carry with two scores as the Tigers pulled away from Florida (42-28) late in the matchup, while his output of 136 yards edged the Bayou Bengals past Auburn (23-20).

Saban said tackling will be critical, and especially with wrapping up Edwards-Helaire.

“He’s got great quickness and change of direction,” Saban said of Edwards- Helaire.

“He has a low center of gravity and he’s kind of power built, so he can run behind his pads… Really good route runner and really good receiver… He makes a lot of people miss. He also can run with power. He has really good hands and he’s very instinctive. He’s very productive.”

Derek Stingley Jr., a freshman cornerback, will have the task of facing one of the college football’s most elite group of wide receivers.

He may be young, but Ed Orgeron and defensive coordinator, Dave Aranda believe he can handle the job.

Listed at 6-foot-1 and 190 pounds, Stingley is having a Freshman All-American year with team-highs in interceptions (four) and pass breakups (nine). The idea could be to match the Baton Rouge (La.) native on either Henry Ruggs III or DeVonta Smith, since Kristian Fulton is going to want to shut down Jerry Jeudy.

Creating separation and winning one-on-one battles will be important for the Tide at receiver, especially when it comes to working back to Tagovailoa.

Alabama may also have to haul in a few contest receptions, as LSU will play tight coverage.

When it comes to Stingley, Saban said he does not play like a freshman.

“I thought Stingley was probably one of the best corners in the country in high school in recruiting,” Saban said. “He certainly has not disappointed. I think he is a fantastic player. He has really good coverage skills… Good ball skills, good tackler, plays with toughness, plays the ball in the deep part of the field really well. He plays with a lot of confidence.”

With the first installment of College Football Playoff rankings out, there is a high feeling of expectation in the air.

The winner of this game will be in good shape, while the loser much have chaos ensue to have its CFP hopes alive. Fans will be shaking the surface inside Bryant-Denny Stadium as Alabama looks for its ninth straight win over the Tigers.

A lot is on the line, but it starts with limiting Edwards-Helaire and Stingley from doing damage.

Ty Perine, No. 3 impact player for Alabama versus LSU
Nick Saban shares a secret behind Joseph Bulovas’ growth in consistency
To Top
%d bloggers like this: