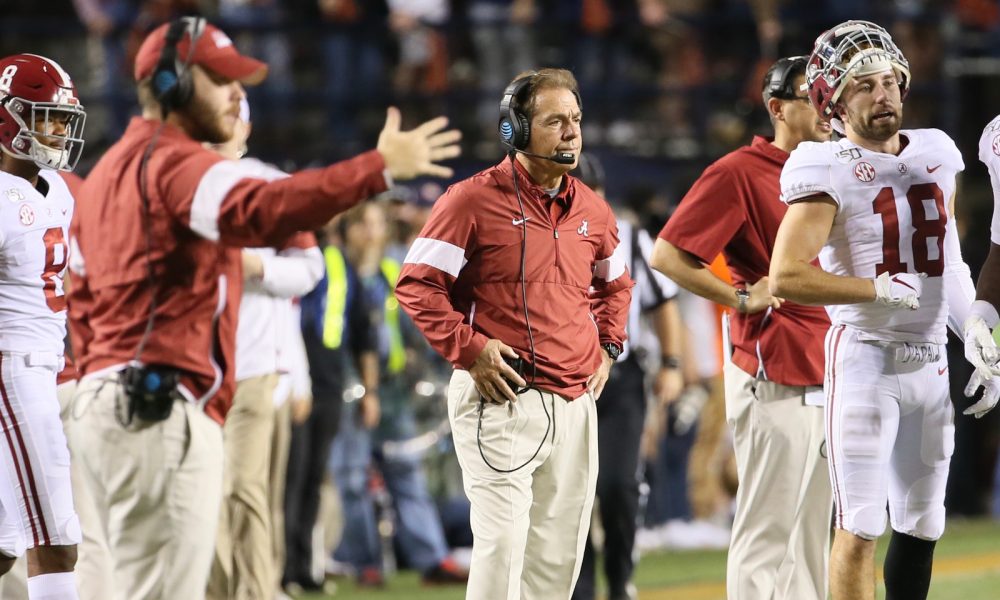 Alabama is headed to a regular bowl game. Let that sink in for a few moments.

Nick Saban’s team is not in the picture for a Southeastern Conference Championship, College Football Playoff appearance, or a national championship. It will play in a basic bowl game for the first time since 2010 and while a multitude of things went into how this season played out, there is one aspect that Crimson Tide fans can’t get away from: controversial calls on the field.

The milk has been spilled, but the CFP committee decided to rub more salt on an open wound with its latest rankings on Tuesday. Despite its losses coming on a combined eight points, Alabama dropped seven spots – falling from No. 5 to No. 12.

RELATED: SEC provides explanation for Auburn’s one second field goal before half

Does the Tide come second fiddle to seven other programs? Of course not, especially when one factors in the bad losses taken by Wisconsin (No. 8, fell to Illinois) and Oklahoma (No. 6, fell to Kansas State). Even with it playing for the Big 12 Championship, Baylor has faced only one ranked opponent all year.

Then, there is Auburn. The committee truly felt that a three-loss Tiger team was better than Alabama, despite its defeats coming on a combined 21 points. While its blemishes came on the fourth fewest points combined, it is the tip of the iceberg in the disappointment of Tide fans.

Yours truly is not one for conspiracy theories, but at the same time, it cannot be ignored how Alabama’s season came down to a pair of blown calls. For starters, let’s look back at the game versus Louisiana State University. The Tigers held a 19-13 lead over the Tide at Bryant-Denny Stadium on Nov. 9 with 1:17 remaining in the second quarter.

Joe Burrow and LSU’s offense drove into Alabama’s territory and was looking for a touchdown. On one play in particular, Burrow targeted Thaddeus Moss – son of NFL legend, Randy Moss — along the left sideline.

Moss was defended by Trevon Diggs, who did not force him out of bounds.

He makes the reception, but his foot was out of bounds as the ball was in the air. He did not re-establish position and when the ball entered his hands, his foot still wasn’t in-bounds.

Moss managed to execute a late toe-tap, but the rules of college football define him as an “ineligible receiver” seeing how he voluntarily went out of bounds and was first to catch a pass while not establishing position. The officials called the play a completed pass, but quickly wanted a second opinion from the cameras.

Upon the play being reviewed, Eugene “Gene” Steratore – a rules analyst for CBS Sports and retired official – said the call on the field should be an incompletion.

Steratore, who officiated college basketball for 23 years and the National Football League for 15 years, watched the same play as everyone else. With there not being a foul committed by Diggs and Moss going out of bounds on his own, the call should have been overturned.

Instead, the referees ruled it a catch and LSU would go on to record a touchdown on the drive.

If the play had been called correctly, Alabama holds the Tigers to a field goal and heads into halftime down by nine (22-13). The Tide outscored LSU, 28-13, in the second half and would have won by a score of 41-35.

Because of a blown call, the Tigers were able to score 14 points and go into the intermission with a 33-13 lead. Alabama lost the game by five points (46-41) when it could have won by six: a difference of one point, due to an error in officiating.

More nerve-wrecking than this was the Iron Bowl.

About 10-15 seconds remained in the first half, as Alabama held a 31-24 lead. Along with it having no timeouts, the Tigers could not spike the ball.

Bo Nix tried to guide the offense into field goal range for Anders Carlson, but time expired as the Tide tackled JaTarvious Whitlow.

When the whistle blew, the clock read triple zeros and by rule, the half is over.

For a venue that lives and dies on one second, Gus Malzahn coerced the officials into adding one second back on the clock at Jordan-Hare Stadium.

This made Nick Saban beyond furious and allowed Carlson to make a 52-yard kick. Auburn went into the half, trailing 31-27.

Even if there was a second left, how would the Tigers be able to get the kicking team on field quick enough as the official spots the ball? This is something to consider.

While it outscores Alabama in the second half (21-14), Joseph Bulovas should have never been in the situation to attempt a 30-yard field goal. If the call on the field was made properly, the score remains at 31-24 and the game would have gone to overtime tied at 45.

Now, does the Tide still win the matchup?

It has a much better chance to.

Alabama endured injuries, major issues on defense and was undisciplined with penalties, but it’s one of three programs within Nos. 5-12 that does not have a bad loss.

Utah fell to a USC Trojan team with four defeats (8-4), yet the CFP committee has the Trojans at No. 22 in the rankings.

Did horrible officiating cost the Tide a shot at a national title? It is certainly a variable.

To be dropped seven spots makes no sense, especially with how the teams above Alabama would not want to play it on a neutral field. Being snubbed for national awards in one thing, but getting robbed of a chance to play for a national title is deeper.

The combination of officiating and the CFP committee added the icing to a cake of “Alabama fatigue” this season.