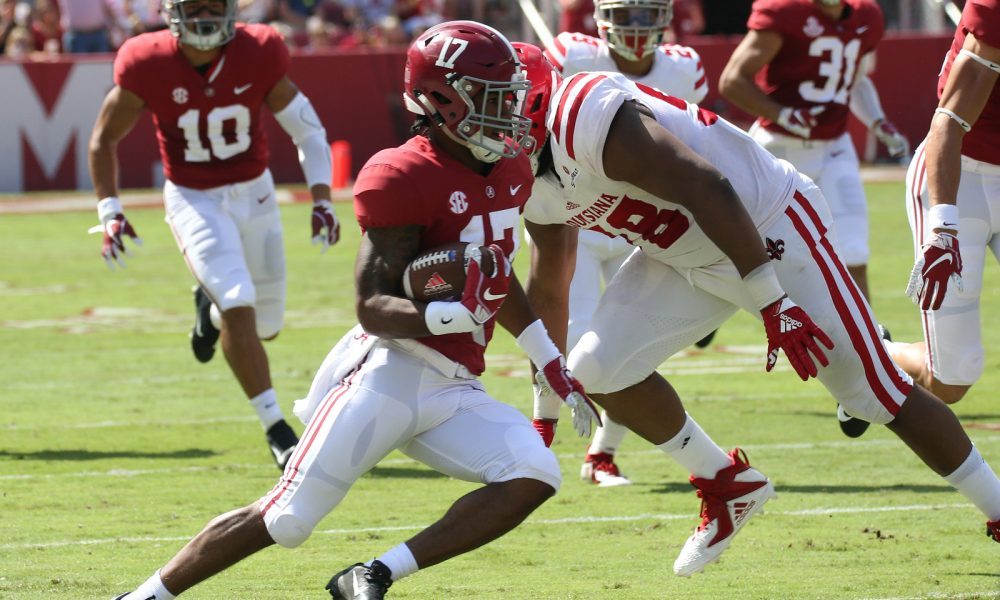 It appears as though Alabama finally has a student-athlete represented as a first-team selection for an All-America list.

After getting showered with second and third-team nominations, Jaylen Waddle was recognized as a first-teamer on Tuesday – according to a report from Sporting News.

The sophomore was honored for his efforts in the return game.

A native of Houston, Texas, Waddle had opposing teams in fear of punting or kicking the ball in his direction.

He led the nation with an average of 25 yards per punt return and totaled 474 yards on 19 attempts.

Waddle also added in 152 kick return yards on four attempts, with an average of 38 yards per return.

The 5-foot-10, 182-pounder chimed in with two touchdowns, both coming against Southeastern Conference schools.

Waddle executed a 77-yard punt return score versus LSU at Bryant-Denny Stadium and a 98-yard kick return score against Auburn on the road.

RELATED: WATCH: Alabama receiver, Jaylen Waddle speaks on how he wants to finish the season strong

Despite the Crimson Tide dropping both games, he was a star.

The quartet of DeVonta Smith, Jedrick Wills, Trevon Diggs and Xavier McKinney all were honorees for the second team.

Diggs boasted a team-high eight pass breakups this season and collected three interceptions – including one returned for a score.

As for McKinney, he led the team in total tackles (85) and had 4.5 tackles for loss, two sacks, five breakups, four quarterback pressures, four forced fumbles and three interceptions.

Alabama is preparing to face Michigan in the Citrus Bowl on Jan. 1, 2020.

WATCH: Alabama receiver, Jaylen Waddle speaks on how he wants to finish the season strong
Alabama outside linebacker Terrell Lewis accepts Senior Bowl invitation
To Top
%d bloggers like this: