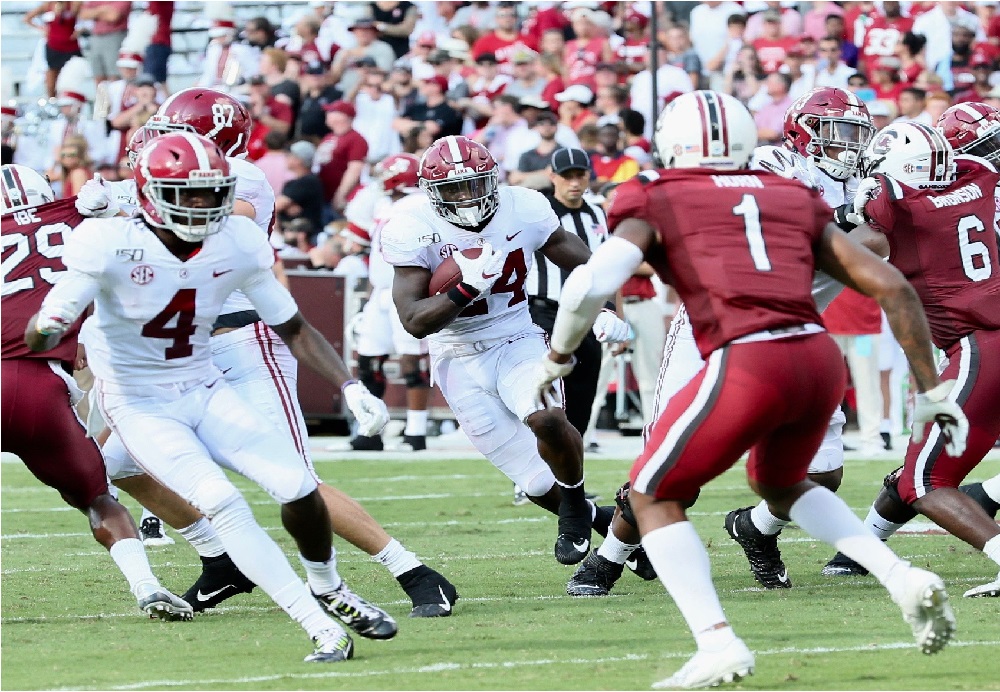 Brian Robinson would love to not only fill the shoes of Josh Jacob’s legacy as the nation’s best reserve running back, but to make the same splash in the NFL. Will he?

Can Brian Robinson be the next Josh Jacobs?

Josh Jacobs career at Alabama isn’t as dazzling as the one he now has in the NFL. When he went to the Oakland Raiders of the NFL, he bolted out of the gate a star and not only a starter, but Pro Bowl selection.

At Alabama he was never the number one running back, came in a little offered afterthought on most programs recruiting list, if they ever knew his name at all. He toiled in backup roles until he graduated, but he made the most of his opportunities, got the attention of NFL scouts and was the first running back taken in the first round of the NFL draft.

But Robinson is looking forward to this season in a big way. He knows how Jacobs made the most of his opportunities, he was there on the sideline watching and learning and he is planning his own campaign to not only take the Tide back to the playoffs, but to build his own resume for the NFL scouts.

As a freshman, Robinson saw very little play, getting only 24 carries for only 165 yards. That was just over two rushes a game on average. Still he had a very impressive 6.88 yards per carry average.

His sophomore year, he got more carries, 63, but his 63 carries saw his average drop to 4.32 yards per carry.

Last season in his junior campaign, Robinson became the reliable number two running back and racked up 96 carries and got his average rush up to 4.59 yards per carry. What’s more, he showed he could be used in the passing game and he made 11 receptions for 124 yards which came out to a 11.27 yard per catch average proving he can move the chains this way too.

Robinson is quick to point to Mac Jones as a guy who exemplified “next man up” on Alabama’s team and knows he’s also just one injury from having the mantle of starting running back thrust on his shoulders. To that he has told the press that he’s learned a lot from his coaching staff, from his fellow players and is ready should that happen.

His teammates all have confidence in him as last season he played in all the first team reps against the first team defense and members of that defense have heaped praise on Robinson saying things like how hard he is to bring down and his ball control. Physical is the word the use most often.

To prove that, last season in third down situations of 3rd and 3 or less, Robinson converted 7 out of 11 opportunities. But in third and up to 6 yards to go, he converted both of the opportunities he was given. These are numbers that catches an NFL scouts eyes.

Robinson’s biggest hurdle this season will be at least repeating the number of running opportunities he got last season because Harris showed last season that he is just something special and the Tide really leaned on Harris during the final stretch of the season. Compounding that is that Alabama has a very deep, very talented pool of younger running backs that Saban will want to give some opportunities too.

Still, expect Robinson to up his yard per carry average, up his total of receiving opportunities and shine as we all know he can. How far he progresses this season will be a fun thing to watch.