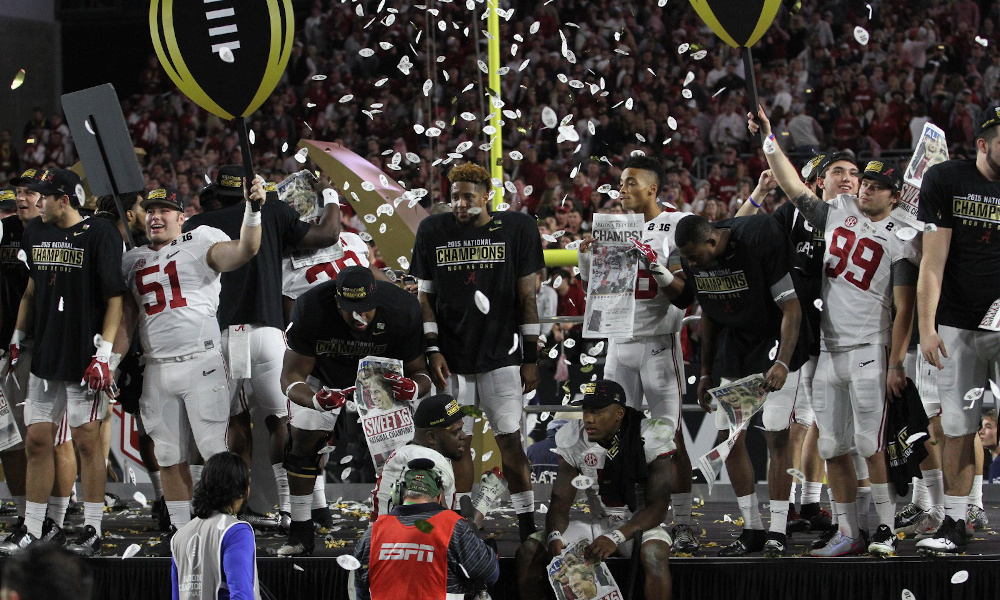 As we continue to move through the spring without Alabama football, the staff at Touchdown Alabama Magazine provides you with a series of entertaining content.

In this piece, yours truly and Stephen M. Smith take a look back on the top-10 most iconic victories for the Crimson Tide under Nick Saban.

Blake Sims’ popularity at Alabama as a starting quarterback began with his performance versus Florida in 2014; however, it grew to superstar status against Louisiana State University at Tiger Stadium in Baton Rouge, La.

On Nov. 8 of that year, Sims battled the pressures of Death Valley and though it was not his finest work, Saban watched his senior quarterback lead the program to an incredible victory. Sims found Amari Cooper for the Tide’s first score of the game and led a critical 9-play drive in the fourth quarter, which resulted in a game-tying field goal from Adam Griffith.

With the score tied at 13 in overtime, Sims found DeAndrew White in the corner of the end zone for the score. Alabama’s defense would deny the Tigers on its first attempt in overtime, delivering it to a 20-13 win. Sims would guide Alabama to a Southeastern Conference Championship and its first appearance in the inaugural College Football Playoff.

Moments that have defined seasons and even dynasties and in 2012, the legend of A.J. McCarron would be cemented in Alabama history. After going 1/7 for zero yards in the second half, McCarron took it upon himself to try and will the team to a win over No. 5 LSU — surrounded by the thunderous screams of Death Valley. The call from Eli Gold will forever be a staple amongst Alabama fans, when McCarron hits running back T.J. Yeldon out of the backfield and rushes in to take the lead.

Some of Saban’s most jubilant wins have come versus Georgia.

In one of the final five SEC Championship Games at the Georgia Dome (Atlanta), it was a historic matchup between the Crimson Tide and the Bulldogs for an opportunity to play in the 2013 BCS National Championship Game versus Notre Dame.

After a scoreless first quarterback, both teams were neck-and-neck going into halftime.

Despite the Tide having success with Eddie Lacy and T.J. Yeldon, the combination of Aaron Murray, Todd Gurley and huge plays on special teams had Georgia carrying a 21-18 edge at the end of the third quarter. For A.J. McCarron, he totaled 30 touchdown passes in 2012 and his best one came in the fourth quarter against the Bulldogs. Lacy started the final period with a 1-yard touchdown run and after a 10-yard scamper from Gurley provided Georgia with a 28-25 lead, McCarron took his moment. He rifled a 45-yard strike down the sideline to Amari Cooper and despite having to slow down to make the catch, the Miami (Fla.) native made it look effortless.

Murray got one last opportunity to defeat Alabama, but Georgia would come up short in the red zone. The celebration was on for the Tide as it punched its ticket to Miami Gardens (Fla.) for the title game.

You can’t bring up the 2011 college football season without discussing the two games between Alabama and LSU.

The first one, taking place in Tuscaloosa, earned the name “The Game of the Century.” It was a defensive bloodbath, where two of the best defenses in the nation shut, locked and barricaded the doors on each other’s offenses.

Unfortunately, the Crimson Tide fell in the first matchup to Les Miles’ squad, 9-6. However, the performance that would come later would be one of the most impressive adjustments by Nick Saban. After barely being able to put up any points in the first matchup, Alabama came back in the rematch against LSU and shut them out 21-0. The Tigers couldn’t cross the 50-yard line, until the second half and Saban earned his second national title over one of the school’s biggest rivals.

This game sparked what would later become one of College Football’s greatest rivalries.

Alabama and Clemson’s first clash is one of the more memorable national championship games in recent memory, due to both of the star-studded rosters duking it out on the field.

The Heisman Trophy Winner, Derrick Henry and future all-time great Deshaun Watson put up massive numbers, trading scores back and forth. The game had immense drama all throughout, including two massive special teams plays that turned out to be the difference in the game.

First, was Nick Saban’s onside kick in the fourth quarter which led to a score.

In the perfect execution from Adam Griffith and Marlon Humphrey recovering the kick, Jacob Coker found an open O.J. Howard for his second touchdown catch.

The next play was breathtaking.

He went through a broken leg in 2014, a shoulder injury and losing his friend — Altee Tenpenny — to a tragic death, but Kenyan Drake pushed on.

His 95-yard kickoff return touchdown was plastered across Sports Illustrated and was immortalized in a Daniel Moore painting.

That’s the textbook definition of a story book ending.

If there was one word that could describe this game, it would be iconic.

Alabama, whose national championship hopes were at an all-time high, got into an absolute dog fight with the Lane Kiffin-led Tennessee Volunteers. Nick Saban and the crew were coming off back-to back-ranked opponents before hosting the Vols, which may have been part of the reason the game was so close.

Offense was no one’s strong suite during the game, but both defenses were on full display and that’s what it took for Alabama to win the game.

Instead of another season lost to an SEC rival, Terrence Cody blocked Daniel Lincoln’s attempt as time expired. Today, the play is well known as the “Rocky Block”, and the turning point of an Alabama season that resulted in Saban’s first national title.

Alabama did not win a national title in 2008, but its victory over Georgia set everything in motion for its run of championships.

Mark Richt and the Bulldogs thought it could intimidate the Tide with its black uniforms; however, Saban and company were not fazed.

Shaun Alexander, former Alabama running back, sensed a return to greatness in this matchup and he could not have been any more accurate.

John Parker Wilson was near flawless, while the Tide’s defense stuffed Knowshon Moreno at running back (34 yards, nine carries) and forced an interception off Matthew Stafford. Despite Georgia carrying the nation’s No. 3 ranking and having hopes for a national championship, Alabama jumped out to a 31-0 lead at halftime and went on to win by the score of 41-30.

After watching Tua Tagovailoa bail out Jalen Hurts in the 2018 CFP title game, it was only right for Hurts to have his redemption versus Georgia at the SEC Championship in the fall of that year.

Tagovailoa battled knee and ankle injuries throughout the season and with him struggling against the Bulldogs — completed 10 of 25 passes, two interceptions — Jake Fromm thought he had an SEC title. Georgia was on fire as Fromm and company led 21-14 at halftime and had a 28-14 advantage in the third quarter.

Tagovailoa would close the gap to seven, upon finding Jaylen Waddle for a 51-yard catch and burst for a touchdown. When the native Hawaiian went down with an ankle injury, it presented Hurts an opportunity to cement himself as an Alabama legend. He led the Tide to 14 unanswered points in the fourth quarter, including a 15-yard touchdown run with 1:04 remaining in regulation.

Alabama won the matchup, 35-28 and Hurts punched its ticket to the CFP for a fifth consecutive time.

This one may not have been the most thrilling, in terms of the closeness of the score, but it is an important one when looking at the legacy of Nick Saban. In 2008, Alabama lost a heartbreaker to Urban Meyer and the Florida Gators in the SEC Championship, and would later go on to lose to Utah in the Sugar Bowl. There were questions as to if Saban was able to get the team over the hump, but in 2009 he proved his doubters wrong.

The Gators, led by Tim Tebow, were looking to cap off its own legacy as one of the great dynasties in college football, but instead a new one was born.

After a hotly contested first half, the Crimson Tide came out in the second with bad intentions shutting out Florida for the final two quarters of the championship game. It was also the game where running back, Mark Ingram locked up Alabama’s first Heisman Trophy in the history of the program. Alabama later went on the defeat Texas in the National Championship Game and well… the rest is history.

Not only is this the most recent win, but it is also the one that Alabama went through the most adversity.

It did not accomplish a national championship in 2016 and it sustained a bunch of injuries at linebacker in the 2017 season.

A loss to Auburn had Tide fans upset, but the team still made the playoff. With guys on defense returning, Alabama had a strong feeling about its chances to win it all. He had a good year — stats wise — but Jalen Hurts had a difficult time with consistently driving the ball in 2017.

Things almost came to a head in the CFP semifinal contest versus Clemson; however, the defense secured the victory for Alabama.

Another championship game came down to two old foes, the Crimson Tide and Georgia.

Hurts had no answers for the Bulldogs’ defense, as it swarmed it and kept Alabama out of rhythm in the first half.

Trailing 13-0 at halftime, the energy was on Georgia’s side and it felt like Kirby Smart was going to defeat his mentor. He had a reputation of going with loyalty over everything, but Saban’s sixth national title was hanging in the balance.

He chose to throw caution to the wind, bench Hurts and roll the dice on a freshman in Tua Tagovailoa from Hawaii. The decision became legendary for Saban, as Tagovailoa torched the Bulldogs for three touchdowns — including a 41-yard, game-winning strike to DeVonta Smith in overtime.

The play, dubbed “2nd and 26,” happened after Tagovailoa took a critical sack on first down.

Saban becomes emotionally unglued on the sideline, but it only lasted a few seconds.

He then experiences the highest form of joy, as Tagovailoa connects with Smith for the score.

Saban threw his headset in the air and for the first time in his career, he thoroughly soaked in the magnitude of the moment. Alabama defeated Georgia, 26-23 and Saban tied Paul W. “Bear” Bryant for most national championships overall in a career.

﻿
Can Brian Robinson be the next Josh Jacobs?
Is there an upside to the Corona Virus for Alabama football?
To Top