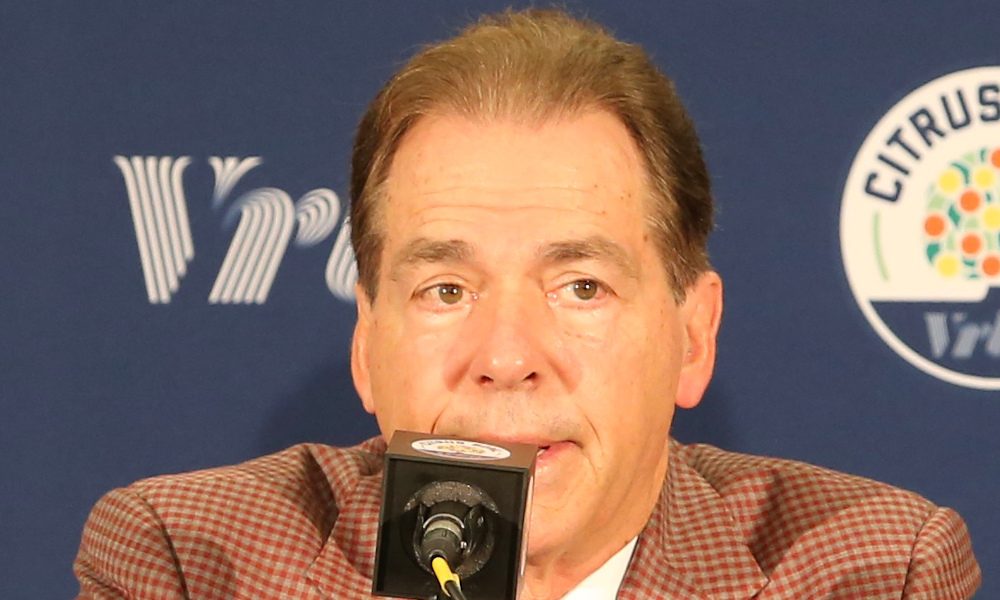 What Nick Saban and what he means is not often the same thing. See what we think he really meant when he gave coach speak replies recently.

Reading between the lines in a recent Nick Saban interview

Recently Nick Saban was interviewed by Sean Pittman on his show and while you hear the words, you may miss some of the meaning as there’s coach speak it everything Saban says.

He was talking about why Alabama was his last stop and why he’s staying put.

Using years of careful listening and questioning myself and after having gotten to know Saban after all these years and being a friend to Mal Moore, who filled me in on many backstories about Saban’s mindset, here is what one could summize he meant when he said the following:

“I think I’m in it now because I have no circumstance that would interest me in leaving in any way, shape or form, which it’s been that way for a long time. This will be my 14th season, so we enjoy it here. The people are very committed to having the best program in the country and doing everything they can to help the players be successful, and that’s the ultimate goal that we have. We enjoy the success and the quality of people and players that we’ve been able to attract here. It’s been a lot of fun.” Saban said on the show.

Let’s break that down, sentence by sentence. “I think I’m in it now because I have no circumstance that would interest me in leaving in any way, shape or form, which it’s been that way for a long time. ” What I think he’s saying here is, Terry and I were tired of bouncing around and moving, starting over and I wanted to be somewhere to be somewhere where I could stay and build a legacy. I wanted to take a program and put my stamp on it and not just build a program, but stay with one for a while maintain what I had built. At my age, I had one last job desire, and that was to prove I could build a great program as I had done at LSU, but maintain it for the long haul.

Secondly you could hear at the beginning that there was no other program, no other job, no other glory to chase that would interest him. He’s been very happy for a while now and maybe a little proud of what he’s able to accomplish.

The second sentence: “This will be my 14th season, so we enjoy it here.” What I hear is, I’ve never stayed too long anywhere, every stop had its good points, but here we finally feel we found a home. We’ve got business and family ties here and we really love everything about where we are at this time in our lives. This is it, we are home.

The third sentence: “The people are very committed to having the best program in the country and doing everything they can to help the players be successful, and that’s the ultimate goal that we have.” Now not just Nick, but the dozens of coaches I’ve talked to in a long career, this sentence says it all about what so many coaches go through. Schools hire coaches like some coaches recruit players. They’ll promise them everything to get them to come there and then renege on those promises later.

Jimbo Fisher told me that Florida State promised lots of facility upgrades only to fail to live up to their word, yet FSU fans hate him and blame him for leaving for a bigger paycheck. That wasn’t the real case. He left because Texas A&M promised him all the upgrades and whatever it would take to build a great team and he knew they’d do it and had the money. They have kept their word to him and now it’s Fisher’s turn to step up and deliver.

Saban once told me that LSU promised a lot more than they ended up delivering to him at LSU and when Mal told Saban he could have whatever he wanted at Alabama he believed him and Mal certainly delivered. Years ago, not long after the hire, on the day of his first A Day Game, Saban had seen the plans for the new stadium, new facilities, shook so many hands of huge donors who assured him that this was just the beginning and then he walks out of the tunnel to see a standing room only capacity crowd at A Day.

Saban told me, “When I saw that, I knew I was home.” He knew that he had 100% fan base support, 100% financial backing for all his dream projects and all at a school with such a heritage and mystique that he would have no problem attracting the nation’s top talent to. It just couldn’t get any better than this. This truly was everything he’d always dreamed of and wanted. In Mal Moore, he not only had a boss who was his friend, but a man who could make things happen. He knew all his promised would be fulfilled and more, but seeing that packed stadium for the A Day Game just pushed all his expectations to the limit.

Today, he has his statue in place, his legacy as college football’s greatest coach in place, he has facilities among the best in the nation with more to come and the boosters even bought the house he was living in and gave it them for as long as they wish to occupy it. He wanted to prove to world what he could do if he had a school and fanbase who was as committed to winning as he was and he did.

And the last sentence in that statement is simple: “It’s been a lot of fun.” Miss Terry as he likes to call her, is having a blast. She is the one who helped Mal Moore get Saban to Alabama. Coaching college football is a tough job, but winning makes it fun. Having a great wife who is not only your partner, but someone who loves it as much as you do makes it fun. Seeing the boys you coach achieve personal and sports success makes it fun and being maybe the most loved person in the entire state makes it a little fun too.

I asked Saban one time how long he would coach and his reply was simple, “As long as I can continue to have the results on the field that this team and I expect, until Miss Terry says it’s time to hang it up or until it quits being fun, I’ll be here. I am home.”

Here’s to continued success and continued fun Nick Saban. It’s been a pleasure to be part of this era and watch the maestro finally have all the pieces put together and finally show the world what he could do at the right place with the right people around him.