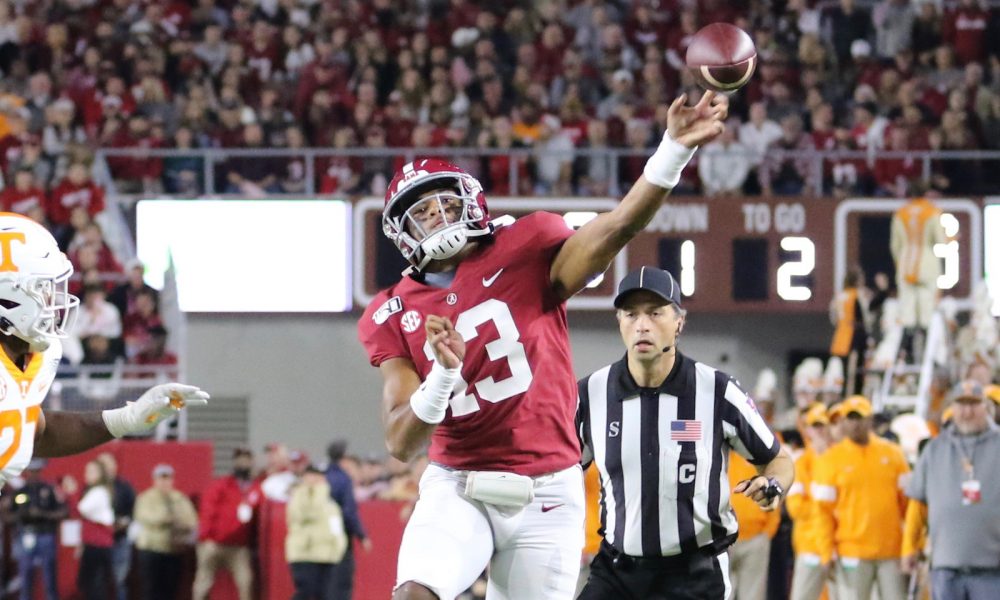 When the great ones speak, it behooves everyone to listen.

He has always said experience is the best teacher and while Nick Saban tries to enjoy life with few regrets, he often thinks about his time in the National Football League. Of his eight years in the pros, he spent two seasons as head coach of the Miami Dolphins from 2005 to 2006.

In an interview with the Wall Street Journal, the five-time national champion at Alabama warned NFL teams not to pass on Tua Tagovailoa.

With the draft starting on Thursday night, various experts and analysts are concerned about the injury history of the native Hawaiian.

Despite all he has accomplished and having the prestige of being the best passer in the class, Tagovailoa had four surgeries in his career.

He sustained a dislocated right hip with a fracture to the posterior wall versus Mississippi State in 2019 and missed the remainder of the season.

When he hears all the negative concerning his former signal caller, it takes Saban back to the 2006 free agency period. Drew Brees was a superstar for the San Diego (now Los Angeles) Chargers. Even when the franchise acquired Phillip Rivers in 2004 from North Carolina State University, Brees was still on top of his game.

Things became very murky for the native Texan when the Chargers designated him to a one-year contract in 2005 and along with this, he suffered a torn labrum in his right (throwing) shoulder that season. Reports also mentioned additional rotator cuff damage and the duo of Dr. James Andrews and Dr. Saby Szajowitz treated him.

Saban wanted Brees prior to the start of the 2006 season, but the medical staff for the Dolphins failed him on a physical and convinced Saban that Brees would not heal. Instead of getting his quarterback, Saban and Miami ended up negotiating with the Minnesota Vikings to get an aging Dante Culpepper and it did not work.

Brees went to the New Orleans Saints and rescued a city that almost lost its franchise.

He guided the team to a Super Bowl in 2009, which healed everyone from the damage Hurricane Katrina caused in 2005. Since Brees’ arrival, the Saints have become a perineal playoff team and he has broken numerous records.

He is set to be a first ballot Hall of Famer, while Saban left Miami in 2006 and the Dolphins have had 14 quarterbacks since 2006.

It has not had a game changer at quarterback since Dan Marino and prior to this month, people felt like the Dolphins were sold on Tagovailoa.

Recently, the team has moved off him and is foused on Justin Herbert of Oregon. Miami has the No. 5 overall pick in the NFL Draft.

“The sky is the limit,” Saban said of Tagovailoa to the Wall Street Journal. “I don’t think any of the questions with Tua have to do with his ability to throw the ball and be effective.”

Before the commotion, the thought was if Tagovailoa fulfilled his medical requirements then he would be a top-five pick. He excelled at every checkpoint and after winning the medical, there are still those who are not 100 percent on him. Tagovailoa even stated that he would not mind playing for the Dolphins, especially with how the weather reminds him of home.

Herbert has more size than Tagovailoa (6-6/238), but the former Tide standout has better mechanics and moves better now than pre-injury.

Carson Wentz and Deshaun Watson both endured injuries in college and the NFL, but neither the Philadelphia Eagles nor the Houston Texans regret drafting them. Patrick Mahomes had a knee injury last season, but still led the Kansas City Chiefs to its first Super Bowl championship in 50 years and was the MVP.

The 6-foot, 217-pounder is a risk, but a lot more reward in terms of his passing abilities.

If Saban would have had Brees, does he end up at Alabama? No.

He sees a lot of Brees and Tagovailoa and doesn’t want teams making the mistake he made.