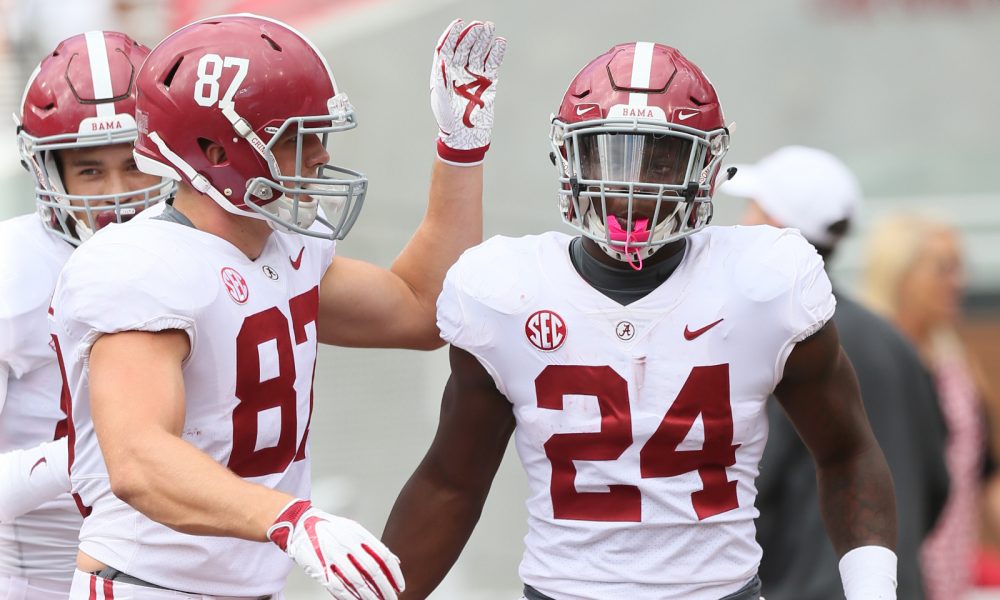 He has made a lot of bold statements this offseason on Twitter, and Brian Robinson intends on making each one come true.

Now a senior at the University of Alabama, the Tuscaloosa native is using this moment as a personal one to display the abilities he possesses.

The former four-star enjoyed the in-person voluntary workouts and with the Crimson Tide transitioning to mandatory sessions, Robinson wants to finish his career strong and give back to his family.

Since arriving on campus in 2017 from Hillcrest High School, he has improved his numbers in each of the last three seasons.

During his junior campaign, he posted 441 yards rushing with five touchdowns on 96 carries.

Along with averaging nearly five yards per rush, Robinson also tallied 11 receptions for 124 yards – showing offensive coordinator Steve Sarkisian his versatility at receiver. The 6-foot-1, 226-pounder is an old school power back, but he is great in pass protection, run blocking and catching passes. Initial quickness upon getting the ball is an area for Robinson to work on.

He seemed a bit slow in his footwork last year; however, the addition of Dr. Matt Rhea from Indiana should improve that. Regardless of the attention Najee Harris is getting, one ESPN analyst and NFL scout believes Robinson has starter potential at the next level.

Jim Nagy, the executive director of the Reese’s Senior Bowl and four-time Super Bowl champion, said many NFL scouts felt that Robinson was the better prospect than Harris at Alabama – until the California native became more aggressive in the second half of 2019.

Before Najee Harris broke out the second half of ‘19 many NFL scouts felt Brian Robinson Jr. was the best RB prospect at @AlabamaFTBL. Powerful, hard-running Robinson is next in line of Bama backups with NFL starter talent (Josh Jacobs & Kenyon Drake). ?#TheDraftStartsInMOBILE pic.twitter.com/UdtILmMBcE

Even with this, Nagy compared Robinson to Kenyan Drake and Josh Jacobs – in terms of Tide backups at running back with star potential in the NFL. Drake was behind T.J. Yeldon and Derrick Henry at Alabama, but the speedster has become one of the most electrifying young players in the pros. Jacobs worked behind Damien Harris and Bo Scarbrough, but he became a serious fan favorite in 2018.

His output of 640 yards rushing, 247 yards receiving, 428 kick return yards and 15 total touchdowns made him a first-round pick of the 2019 NFL Draft.

Jacobs had a 1,000-yard season with the Las Vegas Raiders as a rookie.

The potential is there for Robinson, but he must become the total package.