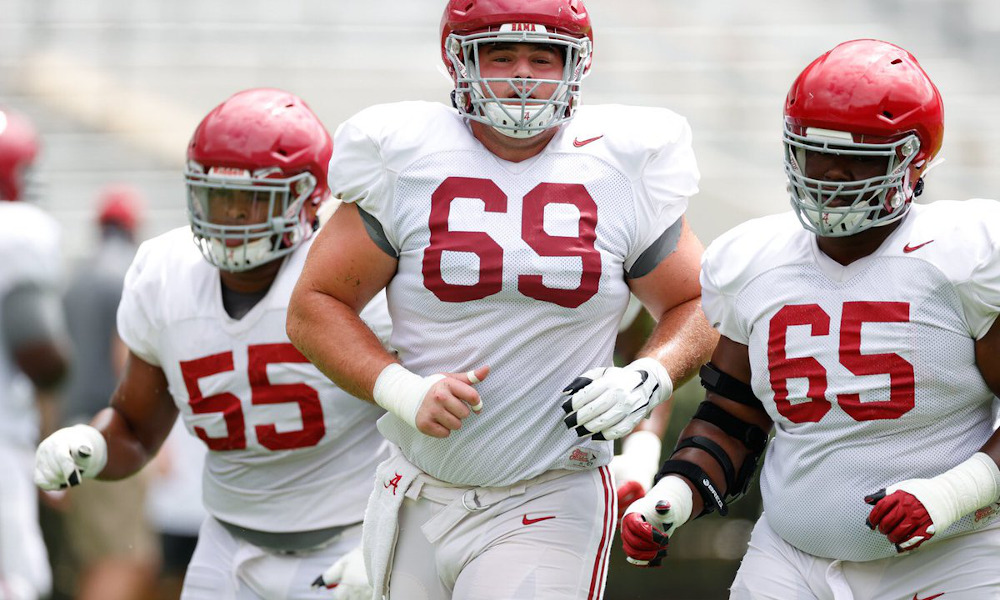 The hard work and versatility of Landon Dickerson is something to behold.

He arrived at the University of Alabama last summer as a graduate transfer from Florida State. A five-star offensive lineman from Hickory, N.C., Dickerson started at both center and right guard for the Crimson Tide in 2019.

Through 13 games — nine at center, four at guard — he graded out at nearly 88 percent at both positions. He allowed only one sack and four quarterback pressures to Tua Tagovailoa and Mac Jones, while guiding Najee Harris to his first career 1,000-yard (1,224) rushing season.

Not only did Dickerson stabilize the offensive line; he has also become the vocal leader of the group. Now at 6-foot-6 and 325 pounds, the redshirt senior sees an opportunity to play guard at the next level.

However, Nick Saban saw his dominance at center throughout fall camp and wants it to continue. During this time of the Coronavirus pandemic, Alabama wants more players to be versatile at different positions. Dickerson operated at center in the Tide’s final scrimmage of the preseason and he performed very well.

Saban desires to get the best five guys on the field at each spot, but he knows it must start with Dickerson.

“He has been a really good leader of that group,” Saban said of Dickerson. “He does extremely well when he plays at center. He does really well when he plays at guard. We’re going to make a decision at some point in time on how to get the best five guys on the field. That may have something to do with what the injury situation is, but as of right now he has played extremely well at center and when we have asked him to play guard… he has played very well there. As other players develop, we always want to get our best five in there and that may mean he ends up some guard at some point in time down the road.”

Alabama has been working Chris Owens, Emil Ekiyor Jr., and Darrian Dalcourt at center too.

All three guys have the capability to play the position, should Dickerson go to right guard, but the experienced veteran provides Saban with some pieces to work with. On Monday, Dr. Matt Rhea (Alabama’s Director of Performance Science) shared a photo of Twitter with news on Dickerson squatting 765 pounds. He leads all offensive linemen in this category and eyes a chance to be a high round draft pick for 2021.

It will be interesting to chart Dickerson’s performance this season.

2020 Alabama Player Spotlight: OLB Will Anderson
Brian Branch is ‘a baller’ and will be a ‘household name’ at Alabama, per Jaylen Waddle
To Top