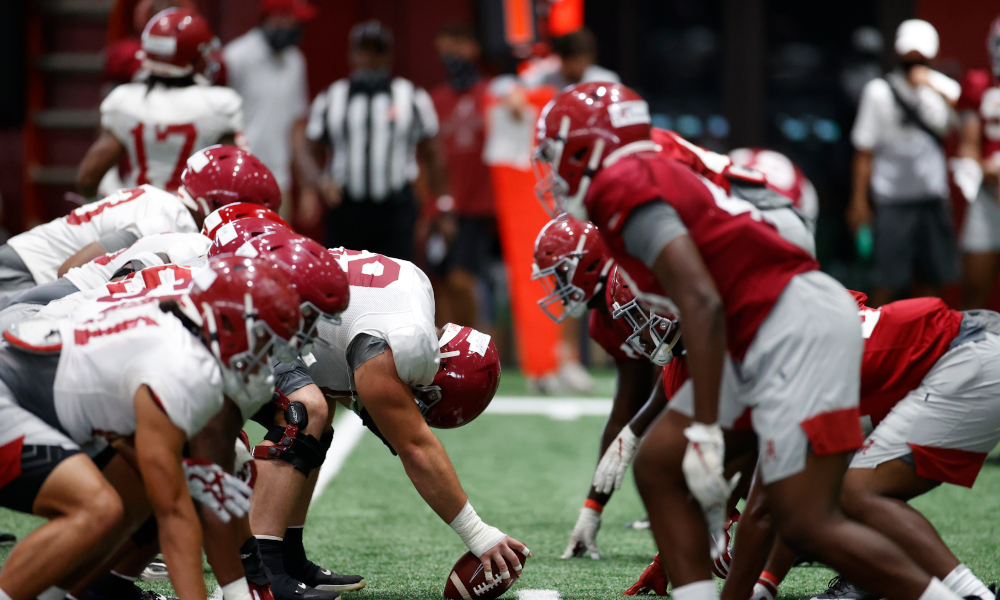 Alabama football concluded fall practice over the weekend, and now its attention turns to Missouri.

Throughout the preseason, Nick Saban has been pleased with the Crimson Tide on offense and he sees growth on defense and special teams.

As the team continues to push toward a strong season, Dr. Matt Rhea (Alabama’s Director of Performance Science) decided to share some impressive strength numbers that occurred during camp.

Since he and David Ballou were hired back in March, both coaches have done a great job of conditioning players, improving speed and preventing injuries.

During the final scrimmage of camp, Alabama’s offensive line from left to right was Kendall Randolph, Deonte Brown, Landon Dickerson, Emil Ekiyor Jr., and Evan Neal. Alex Leatherwood did not participate, but he has played in 35 career games — including 28 starts at right guard and left tackle. When it comes the potential starting group, the Tide is looking at Leatherwood, Brown, Dickerson, Ekiyor and Neal.

On Monday, Rhea posted a photo that shared impressive squatting numbers from Dickerson, Brown and Ekiyor.

Dickerson led the trio in squatting 765 pounds, while the trio squatted 1,885 pounds as a whole.

Those three, led by Landon’s 765 lbs, squatted a combined 1885 lbs today (full depth). So yeah I’d say monsters is an accurate depiction. And for our S&C followers…yes strength continues to climb despite less than 10% of our volume actually targeting it. https://t.co/4e0HK6EiY8

This year’s front has the makings to be the best offensive unit in college football.

Along with the line, Rhea has also been impressed with a true freshman linebacker.

Quandarrius Robinson, a native of Birmingham, Ala., arrived in the 2020 signing class for the Crimson Tide as a four-star outside linebacker via Jackson-Olin High School. Listed at 6-foot-5 and 220 pounds, Robinson is one of four pass rushers pushing for playing time this season.

Per Rhea, Robinson did 49 pull-ups after a workout on Monday and it got his attention.

I like this guy @QueRobinson23. Comes up after the workout today and tells me pick a number between 1-50. I said 49. Does 49 pull-ups. Might want to limit range to 1-25 next time my man! pic.twitter.com/hyuKgOCb91

For the Tide, the program is all in on getting back to the College Football Playoff and winning a national championship.