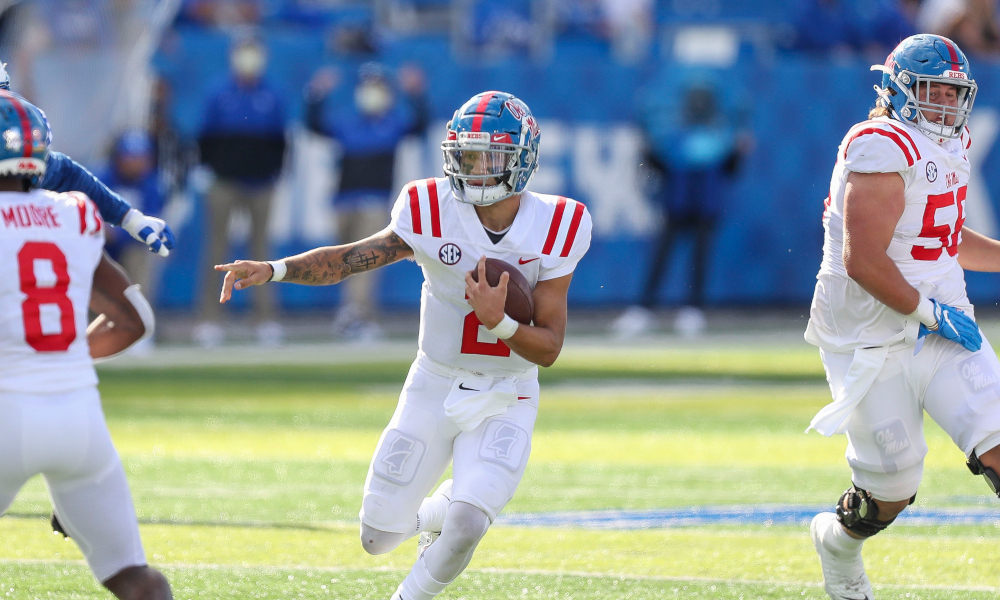 Even with it being moved to 6:30 p.m. CT, the Alabama-Mississippi game will still be an entertaining one on Saturday at Vaught-Hemingway Stadium in Oxford, Miss.

His lone two blemishes came from Hugh Freeze as Mississippi’s head coach in 2014 and 2015.

RELATED: Alabama-Mississippi matchup has been delayed, due to Hurricane Delta

In a weird season of just conference games, due to the Coronavirus pandemic, Lane Kiffin is trying to become the first former Saban assistant to defeat him on the field. Kiffin, who is in his first year at Ole Miss, was Alabama’s offensive coordinator from 2014 to 2016. He coached two 3,000-yard quarterbacks (Blake Sims, Jacob Coker), two 1,000-yard running backs (Derrick Henry, Damien Harris), one 2,000-yard rusher (Henry), two 1,000-yard receivers (Amari Cooper, Calvin Ridley), one Fred Biletnikoff Award winner (Cooper) and one Heisman Trophy winner (Henry). During his first season, Kiffin aided Jalen Hurts into being Freshman of the of Year and Offensive Player of the Year for the Southeastern Conference in the 2016 campaign.

He has a lot of offensive talent, but needs to recruit defense for Mississippi. Despite inclement weather, Kiffin still intends on throwing many things at Alabama’s defense.

As for D.J. Durkin, the co-defensive coordinator and linebackers coach at Ole Miss, Saban has much respect for him. He is focused on using a few stunts and movements up front to stifle the Tide’s offensive line.

With the Tide needing to have a complete game before facing Georgia, listed below are five impactful players for Ole Miss that Alabama must focus on.

Prior to the season, many people thought John Rhys Plumlee would start at quarterback for Mississippi.

Last year, he gave Alabama’s defense a ton of problems. In his true freshman campaign, Plumlee had 141 passing yards, 109 rushing yards and three total touchdowns versus the Crimson Tide. Regardless of the Tide getting a 59-31 win, its defensive front had no answers for the speed and throwing abilities of Plumlee.

He has much to offer as a sophomore; however, Kiffin actually has gotten Matt Corral to work at quarterback. Once a highly-touted prospect, Corral was headed to the Florida Gators, until Ole Miss flipped him in the 2018 recruiting cycle.

He played in four games as a true freshman, but has turned it on now.

Through two games, Corral has completed 76.7 percent of his throws (46-of-60 passing) for 715 yards with seven scores to one interception.

He has rushed for 101 yards on 23 carries and is operating the RPO  (run-pass option) offense very well. Coach Kiffin wants to get Corral on the edge of the Tide’s defense and let him create.

RELATED: Lane Kiffin wishes Alabama’s offense was like the 2009 offense that didn’t score a touchdown against Tennessee

It is going to be imperative for LaBryan Ray, Christian Barmore, Justin Eboigbe, DJ Dale, Christopher Allen and William Anderson to play assignment football. Each player has to win its one-on-one battles inside and on the edges.

He was almost a member of Alabama’s running back room.

The 2019 recruiting cycle for Alabama at the position was between Trey Sanders and Jerrion Ealy. At the time, there was a real concern as to whether Sanders would clear academically to enroll early. During the latter portion of the cycle, the Tide started targeting Ealy.

Although it ended up getting Sanders, Ealy (a two-sport player) decided to stay in-state and play at Ole Miss.

He, like Plumlee, had success versus the Tide in 2019. Listed at 5-foot-8 and 190 pounds, Ealy totaled 68 yards rushing on 11 carries with an average of 6.2 yards per attempt. He had 722 yards rushing with six touchdowns last year, while tallying 123 yards and two scores on 26 carries through two games. Alabama has had multiple players represent Ealy in practice on scout team.

After getting burned by running backs on wheel routes three times, the Tide has to deal with Ealy’s hands at receiver too.

He caught 20 passes a season ago for 172 yards with one touchdown. Ealy has four receptions for 49 yards this year.

He is not a physical specimen, but Elijah Moore is well put together at wide receiver.

Along with Ealy, Alabama has to finish tackles on Moore too. He is good at creating separation off the line of scrimmage with his feet and has developed into a clean route runner. Much like he did for the Tide with Amari Cooper and Calvin Ridley, Kiffin will look for matchups where can exploit Alabama’s secondary with Moore.

He was Mississippi’s leading receiver in 2019 with 67 catches for 850 yards and six touchdowns.

The junior has 20 receptions for 319 yards receiving with one score this year.

Sam Williams is the latest name in a line of defensive enforcers at Mississippi.

He transferred from Northeast Mississippi Community College in 2019 and had a strong year. A native of Montgomery, Ala., Williams collected 37 tackles, 9.5 tackles for loss, six sacks (team-high), five quarterback hurries, one forced fumble and one interception. The 6-foot-4, 265-pound outside linebacker has seven tackles, one tackle for loss, one sack and one forced fumble through two games. In a matchup with horrid weather conditions, look for Williams to try and strip the ball from Alabama.

It was against Alabama in 2019 where Ryder Anderson’s season was cut short.

RELATED: Gaining experience and being fully healthy has Christopher Allen playing his best football at Alabama

He appeared in his first five games at Mississippi, until he suffered a lower leg injury. The talented defensive end posted 14 tackles, 2.5 tackles for loss and two sacks prior to the mishap.

Now fully healthy, Anderson is a senior that is looking forward to frustrating the Crimson Tide’s offensive front. Ole Miss will try some things with its defensive line to offset the Tide, and Anderson has the speed and hands to create pressure to Mac Jones.

After setting Mississippi’s freshman rushing record (1,023 yards) and total scores (16) mark in 2019, John Rhys Plumlee stamped himself as a force in the SEC. The last player to have the abilities he had and caused Nick Saban the most headache was Johnny Manziel of Texas A&M in 2012. Manziel, a redshirt freshman then, led the Aggies into Bryant-Denny Stadium and won, 29-24.

On Wednesday, Saban told reporters that the Tide must account for Plumlee in whatever way he is used.