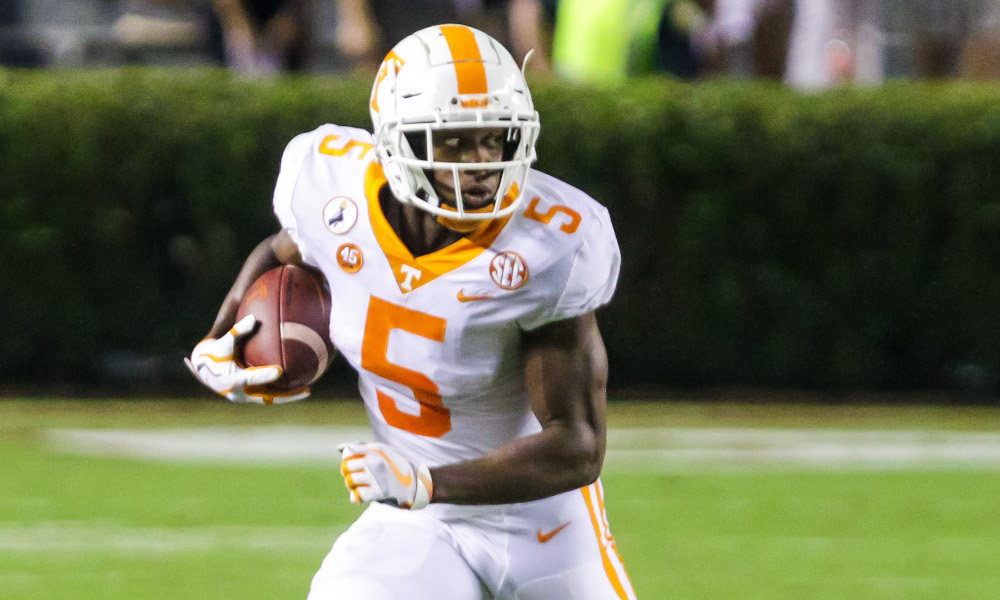 Jeremy Pruitt has nothing to lose and that is a scary thing.

He will try to find anyway possible to create an edge on Saturday versus Alabama football.

For the University of Tennessee, costly turnovers on offense have it at 2-2 on the season. It had an opportunity to defeat the Georgia Bulldogs and Kentucky Wildcats; however, the inconsistent play at quarterback hurt it in both matchups.

While the Crimson Tide has no idea on who the Volunteers will have as its signal caller, Nick Saban stated on Wednesday about the importance of remaining focused.

As the last former assistant coach to face Saban this month, the six-time national champion is not taking Pruitt lightly.

Despite its issues with turnovers, Tennessee has a lot of talented players. If it can find a way to protect the football and limit Alabama’s high-flying offense, Pruitt may have a chance to shock the world. He has a challenge ahead of him, but yours truly of Touchdown Alabama Magazine has the impact players for the Volunteers that the Tide cannot afford to overlook this week.

When it gets the ball, Tennessee wants to keep Alabama’s offense on the sideline as much as possible.

In doing this, the duo of Eric Gray and Ty Chandler will be featured at running back.

As a sophomore, Gray has performed better this season in four games. He comes in with 298 yards rushing and two touchdowns one 60 carries. A native of Memphis, Tenn., Gray was a preseason honoree for the Doak Walker Award and is averaging 74.5 yards rushing per game.

RELATED: Christopher Allen’s breakout performance against UGA was just what the doctor ordered as a confidence boost

Both Roydell Williams and Jase McClellan have been representing Gray for Alabama in practice.

With the exception of Elijah Moore and Kenny Yeboah of Mississippi, Alabama’s defensive secondary has not allowed wide receivers or tight ends to have 100-yard performances.

Josh Palmer, a senior for Tennessee, will provide a different challenge. The 6-foot-2, 210-pounder is an experienced playmaker that will bail out quarterbacks with clutch receptions. He is really good in space and leads the Volunteers with three touchdowns and 238 yards receiving on 15 catches. Palmer was one of four players to record at least 20 receptions (34) last year, totaling 457 yards with one score. For the Crimson Tide, its defensive backfield must lock him down throughout the game at Neyland Stadium.

He is the captain on defense for Tennessee.

Henry To’o To’o, a sophomore linebacker, almost ended up at Alabama in the 2019 recruiting cycle. A native of Sacramento, Calif., he chose to sign with Pruitt and the Volunteers. After a strong freshman season, To’o To’o leads the team in total tackles (31) through four games and averaged nearly eight tackles (7.75) per game.

Listed at 6-foot-2 and 225 pounds, he has five tackles for loss, one sack and one interception.

The Vols have given up 29.3 points per game.

Alabama had a couple of players — including Kevin Harris II —  to wear No. 13 in practice this week, to represent Deandre Johnson of the Volunteers. He has 12 tackles, but his 3.5 sacks lead the team. Johnson also has 3.5 tackles for loss, making him the most consistent player in generating negative plays. The Tide’s offensive line must keep him away from Mac Jones.

He has yet to record an interception, but Kenneth George has four pass breakups.

The senior leads Tennessee in this category, while having 16 total tackles.

At 5-foot-11 and 200 pounds, George will have the toughest responsibility of trying to limit DeVonta Smith, Jaylen Waddle and John Metchie of Alabama. Smith and Waddle are averaging over 120 yards receiving per game.

Jeremy Pruitt is currently picking between four players — Jarrett Guarantano, Harrison Bailey, J.T. Shrout and Brian Maurer — to run the offense against Alabama. Guarantano is the most athletic of the group, but his struggles with protecting the ball has him in a fight to keep the starting job.

Pruitt will try to have the best quarterback on the field, so it will be interesting to see how it plays out.