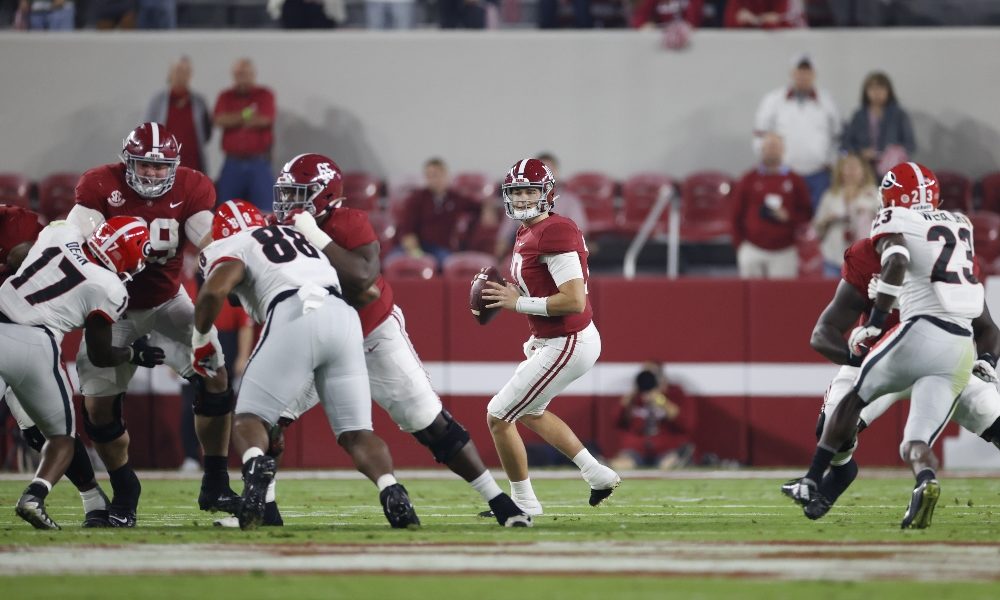 The first half wasn’t pretty, but Alabama came out with a different attitude in the second half on both sides of the football against Georgia.

Offensively, the Crimson Tide was once again led by the likes of Mac Jones, Najee Harris, Jaylen Waddle and DeVonta Smith.

Jones continues to look dominant in the pocket finding the open man and not making very many mistakes. After tossing an early interception in the first quarter he went on to end the game going 24/32 for 417 yards and four touchdowns.

Harris appeared to be the team’s only viable option in the backfield as the team didn’t have another rusher with over 30 yards on the night. But that didn’t matter to number 22 as he methodically wore out Kirby Smart’s defense in the second half bleeding. Harris finished the game with 31 carries for 151 yards and a score.

The Georgia secondary had its hands full all night with Alabama’s dynamic duo in Waddle and Smith. The two combined for over 300 receiving yards as the Bulldogs secondary got itself into trouble with some penalties for they could not keep up with the two.

Smith, in particular, added another game into his career of Georgia domination as he ended the contest with 11 catches for 167 yards and two touchdowns.

Defensively Alabama had a much better approach in the second half but still showed a few glaring issues. The unit allowed no points in the second half after giving up 24 in the opening two quarters, but some of the improved play had to do with Stetson Bennett looking like the walk-on quarterback he entered the program as.

Nonetheless, there were definite positives in the second half. Alabama clamped down on third down not allowed Georgia to continue long drives and were also able to finish more tackles and rally to the football.

The secondary came away with multiple big takeaways and pass deflections to thwart the downfield passing game.

All in all head coach Nick Saban should be proud of the performance his team put in to defeat a top five team like this.