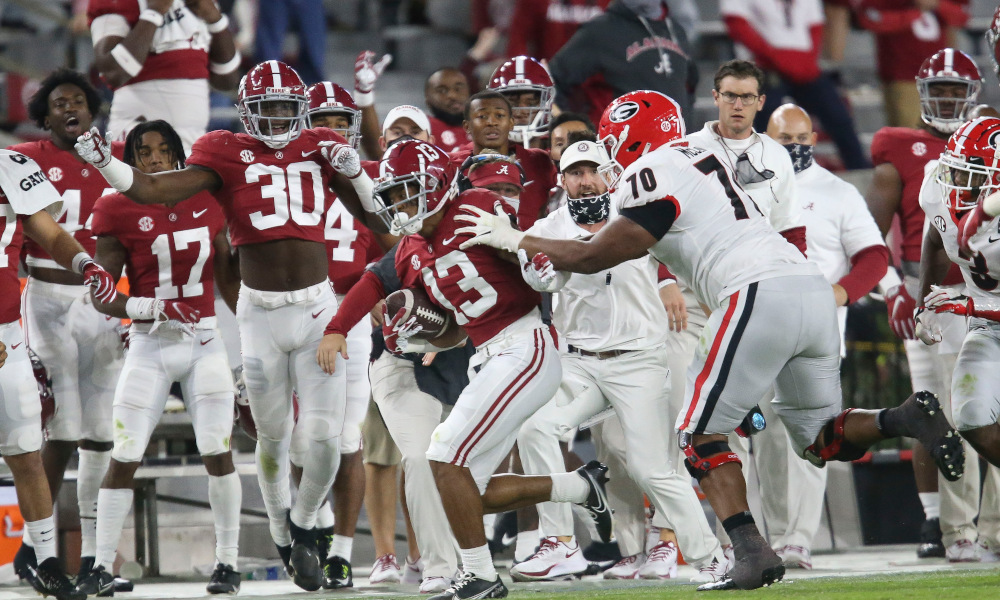 Alabama football has a rockstar on defense and it is a true freshman.

Malachi Moore, a native of Trussville, Ala., was all business in preseason camp and the four-star has been very impressive through four games.

Whether it’s his tackling, confidence, instincts or ball skills, there have been moments where the alumnus of Hewitt-Trussville High School looks like the best defensive back on the field.

For a defense that is trying to turn a corner and play better, he has been in the right place at the right time to record huge moments.

Moore collected his first career interception in Alabama’s 52-24 win over Texas A&M, but he almost took the roof off Bryant-Denny Stadium with a timely play against Georgia.

After the Crimson Tide took a 27-24 lead in the third quarter, Moore picked off Stetson Bennett in the middle of the field on a third down pass.

He returned the interception 42 yards and the place went crazy. His coaches, teammates and the Tide fans were excited as he was the second defender to grab the “Ball Out” turnover belt.

Alabama’s offense was able to capitalize on Moore’s play, turning in a 5-play drive that resulted in a rushing touchdown from Najee Harris. The 6-foot, 182-pounder helped the Tide push to a 10-point advantage (34-24) and it won the matchup by a score of 41-24. Moore posted two tackles, one pass breakup, one quarterback hurry and one interception. In the aftermath of defeating the Aggies, Saban talked about Moore’s ability to learn from mistakes and how he takes pride in learning. Before he became the head coach at Bessemer City High School, Rudy Griffin coached Moore at Hewitt-Trussville.

The former Alabama defensive lineman saw potential in Moore as a sophomore.

“He has always been the most driven guy in the room” Griffin said to yours truly of Touchdown Alabama Magazine on Moore.

“His success has not been a surprise to me. He is literally a Tom Brady or Peyton Manning on defense.”

When it comes to Byron Devinner, the head coach of Southern Xpress has known Moore since childhood. 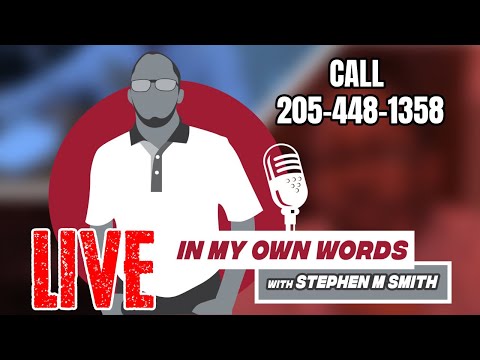 “The one thing about Malachi is you are not going to outwork him,” Devinner said on last week’s airing of In My Own Words.

“I guarantee you, when he got to Alabama they realized this kid can work. He does not get tired, he is going to work and he is going to study. I have known his family for quite some time. It was funny when he first started playing with me, because his dad was a huge basketball fan. I sat with Malachi for two hours one day and told him ‘you are going to be a football player. You are not a basketball player. You are 6’1″ and there are not too many Allen Iverson’s out here any more.’ He bought in and had a great three years playing with us. Malachi is a winner and I never doubted him because when he puts his mind to something, he makes it happen.”

Moore’s work ethic earned him the starting role at star in the Tide’s nickel defense.

He is sixth on the roster for total tackles (18) and has one tackle for loss, three pass breakups (team-high), one quarterback pressure and two interceptions (tied for team lead).

Justin Smith, the lead scouting/recruiting analyst for TDA Magazine, followed Moore throughout the 2020 recruiting cycle. During conversations with Smith, I was told Moore carries similar traits to former All-America safety and Jim Thorpe Award winner, Minkah Fitzpatrick. Fitzpatrick, like Moore, won the starting job at nickel for Alabama as a true freshman in 2015. 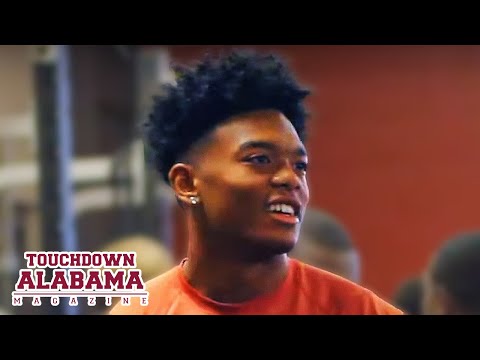 Fitzpatrick was a Freshman All-American and would be a first-round pick in the 2018 NFL Draft.

The difference between Fitzpatrick and Moore is the New Jersey native was better at blitzing quarterbacks.

Fitzpatrick always hit home upon being sent on a pressure package. Moore has been in the backfield, but has not been able to finish plays with sacks. He will develop the skill set with practice, but he’s provided positive consistency in the secondary.

RELATED: Nick Saban’s celebration and dance after Georgia win is a must-see

Coach Saban loves that more than anything else.

Moore will take his game with Alabama to Tennessee this week to face the Volunteers.