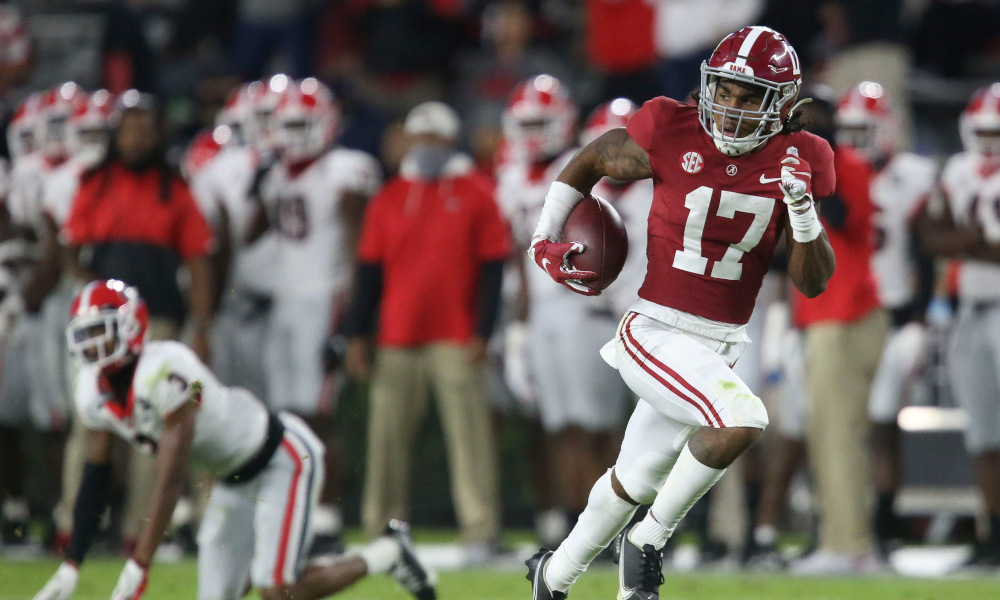 Alabama football remains undefeated in the Southeastern Conference and Nick Saban has another win over a former assistant coach.

For the Crimson Tide, it earned a 41-24 victory over the Georgia Bulldogs on last week at Bryant-Denny Stadium.

Despite bringing a marquee defense into the matchup, Georgia could not slow down the Tide.

Mac Jones paced Alabama’s offense to 41 points and 564 total yards. After getting embarrassed by Ole Miss, the Tide bounced back on defense and shut the Bulldogs off the scoreboard in the second half. Prior to the game, Saban was cleared by the SEC protocol to coach after receiving a third straight negative test for Coronavirus.

Upon the conclusion of the game, the 68-year-old shared a joyful moment as he danced in the locker room with his players. Alabama turns its focus toward Tennessee this week, but yours truly of Touchdown Alabama Magazine dives into the five major takeaways from the Tide’s victory over the Bulldogs.

1. Mac Jones is a battle-tested quarterback

He appeared to be rattled in the first half, but Mac Jones quickly shook it off.

Despite an interception and Georgia getting pressure to him, the redshirt junior torched the best defense in the SEC for 417 passing yards and four touchdowns. It was his third consecutive 400-yard performance and he is the first player in Alabama history with multiple 90-yard scoring tosses. He hooked up with Jaylen Waddle for a 90-yard touchdown in the third quarter, to give the Crimson Tide a 27-24 lead.

Also, Jones has four straight games where he’s completed at least 75 percent of his throws.

Alabama outscored Georgia, 21-0, in the second half with Jones. Through four games, he has 1,518 passing yards with 12 touchdowns to two interceptions. After this outing, Jones has proved to national media he belongs in the Heisman talk.

2. Najee Harris is firmly in the Heisman talk now

Najee Harris came back to Alabama to create huge value for himself.

On last week, the senior running back wore down the best run defense in all of college football.

RELATED: Nick Saban’s celebration and dance after Georgia win is a must-see

Before facing the Tide, Georgia allowed just 38.3 yards rushing per game. Harris pounded the Bulldogs’ defensive front for 152 yards rushing with one touchdown on a career-high 31 carries.

He wanted the challenge of killing the mental will of Georgia’s defense and Alabama’s offensive line assisted Harris in winning the challenge.

He averaged nearly five yards (4.9) per carry and 10 of his attempts resulted in either first downs or scores. Harris, like Mac Jones, needed a stellar game against an elite defense to solidify his spot in the Heisman conversation.

After a career showing versus Ole Miss, Harris answered big time against Georgia.

Alabama’s duo of DeVonta Smith and Jaylen Waddle will not drop below the 15th overall pick for the 2021 NFL Draft.

Both players are creating a top-10 draft stock, and the competition is not even close. He set a new career-high for receptions (13) in a single-game against Mississippi, but Smith tied his previous career mark of 11 catches against the Bulldogs. He totaled 167 yards with two touchdowns — including a 13-yard score that put the game out of reach in the fourth quarter.

The 6-foot-1, 175-pounder is the best route runner in college football.

He has all the traits of an elite wide receiver and Smith is not done yet. As for Waddle, he has four consecutive 100-yard performances. A junior from Houston, Texas, he recorded 161 yards receiving with one score on six catches.

Waddle has the speed, acceleration, hands and now, he’s become a little more polished in his routes.

The 5-foot-10, 182-pounder has been on the receiving end of Mac Jones’ deep ball scores, including ones of 90, 87, 46 and 45-yard touchdowns. He is a nightmare for defensive minds in space and Steve Sarkisian has gotten him the ball more naturally.

4. Alabama’s defense may be turning a corner

It got chewed out by Tide fans, local media and national media for its effort against Ole Miss; however, the second half versus Georgia was a different story for Alabama’s defense.

Is this group starting to find itself?

This was a question a lot of supporters were thinking about, especially with the Crimson Tide pitching a shutout in the second half. Some improvements are needed to correct a few more mental errors, but the real definition of Alabama football on defense was shown and fans were pleased.

Prior to facing the Tide, national reporters looked at the Bulldogs as a second half team.

Alabama got consistent pressure to Stetson Bennett and it resulted in two sacks, three interceptions, 10 pass breakups and four quarterback hurries. He attempted 40 passes versus the Tide and completed 18 for a mark of 45 percent, while Zamir White was held to his second lowest rushing total (57 yards, 10 carries) of the season. Alabama’s secondary kept George Pickens quiet (five catches, 53 yards) and if not for an 82-yard score from Bennett to James Cook, Georgia would not have had a 100-yard receiver.

Third down defense was the story of the game for the Tide.

The Bulldogs converted five of nine tries on third down in the first half, but Alabama surrendered only two conversions in the second half on seven attempts. Coach Saban saw his group make it a point of emphasis to get off the field on third down.

Of its 10 breakups, five came from the defensive front.

If it can take the second half performance from Georgia and apply it to the remainder of the season, Alabama has a huge opportunity to win a national championship.

5. Will Reichard is giving the Tide a consistent kicker

For the first time since Jeremy Shelley in 2012, Alabama football has a big time kicker.

Will Reichard, a sophomore, has given the program confidence on special teams.

He suffered a hip injury last season versus Southern Mississippi, but is healthy now and kicking well.

The former three-star shifted the momentum in Alabama’s favor when he drilled a 52-yard field goal before halftime. He brought the crowd to life at Bryant-Denny Stadium and despite it trailing 24-20 at halftime, Reichard put the Tide in a good position to strike in the second half.

The 6-foot-1, 190-pounder made two critical kicks over the weekend and has made all four of his attempts this season. Also, Reichard has been perfect on his PAT’s (point after touchdowns) with 26 consecutive makes. Alabama had an issue with his kicking game for a while, but Reichard has been exceptional.