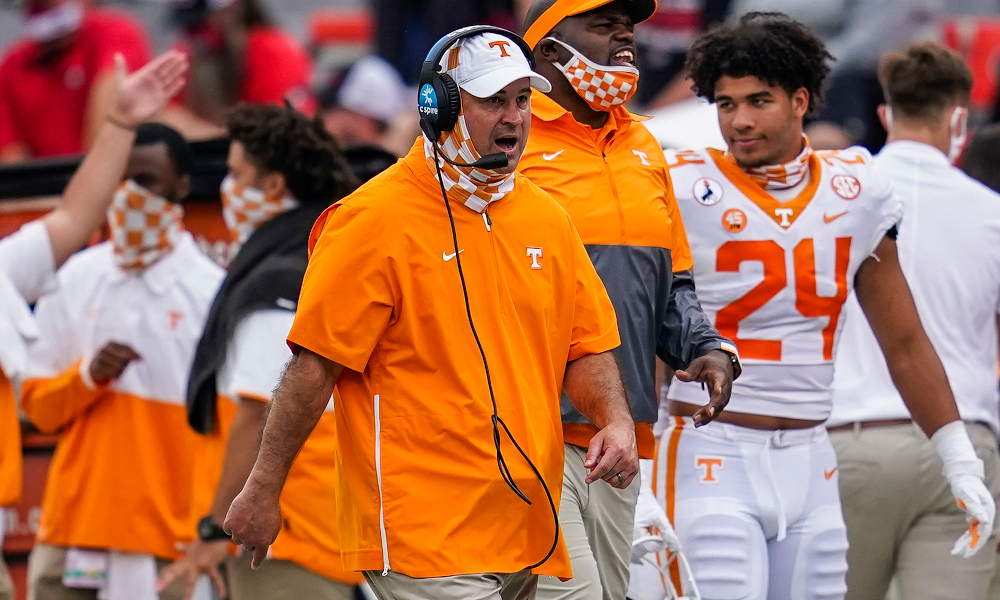 Jeremy Pruitt has been around the state of Alabama for a long time.

He played defensive back for Eugene “Gene” Stallings at the University of Alabama from 1995-96 and coached a various high schools in the state — including Hoover High School — for eight years. During his two stints on Nick Saban’s coaching staff, the quarterbacks he saw were John Parker Wilson, Greg McElroy, AJ McCarron, Jalen Hurts and Tua Tagovailoa.

He witnessed the evolution from “game managers” to elite level signal callers; however, he has never seen the Crimson Tide this explosive on offense. As a third-year head coach at Tennessee, Pruitt is complete mind blown by how good Alabama is offensively.

Jones has completed 90 of 115 passes (78.3%) for 1,518 yards with 12 touchdowns to two interceptions. He is the first signal caller in Alabama history to record three straight 400-yard passing games, and is coming off a matchup where he torched the Georgia Bulldogs for 41 points and 564 yards in a 41-24 win.

The Tide has two wide receivers — DeVonta Smith and Jaylen Waddle — averaging at least 120 yards per contest, and Najee Harris chimes in with an average of 21 carries for 125 yards per matchup. He has turned in 499 yards rushing with 11 scores on 83 attempts.

With this group scoring at least 40 points versus three opponents, including a pair of 50-point games, Pruitt knows the challenge his defense faces on Saturday at Neyland Stadium in trying to slow down Steve Sarkisian and this unstoppable attack.

“I think through the first four games, this is probably the best Alabama offense that I’ve ever seen since I’ve been alive,” Pruitt said on Wednesday at the SEC Coaches Teleconference. “They spread you out all over the field. They can run the ball if they want to. They create explosive plays. Lots of dynamic playmakers. They spread it around and make very little mistakes.”

Once again, Pruitt was at Alabama when McElroy and McCarron won national championships.

RELATED: Alabama’s defensive front ‘getting better with physicality,’ according to DJ Dale

He came back in 2016 and watch Tagovailoa come off the bench in the 2018 College Football Playoff title game (2017) to lead the Tide to a national title. Even with those teams, this group does something different in Pruitt’s mind.

“They’ve been really good offensively for several years,” Pruitt said, “but through four games, from an efficiency, explosive plays, scoring (standpoint), I’d have to say they’ve played as good as any I’ve seen.”

As talented as the wide receivers and running backs are, Mac Jones is the straw that stirs the drink.

He played well in replacing Tagovailoa last season, but his confidence is on a different level.

Jones has been hitting receivers in stride, making the right reads, adjusting to what defenses do, and shredding those defenses with pinpoint accuracy. Tennessee has to get pressure to Jones early and often, if it wants success in the game.

“When you look at Alabama, to me, it starts offensively,” Pruitt said. “When you talk about the efficiency of the quarterback play, I think Mac Jones is doing a fantastic job. Understands the offense, getting the ball out of his hand, get them in the right place. They’ve got lots of playmakers at wide receiver, at running back and at tight end, but I’m not so sure that the strength of their offensive team is not their offensive line.”

Regardless of it allowing six sacks to Jones, the offensive line has been strong for Alabama.

RELATED: Alabama QB Mac Jones stands at No. 2 in 2020 Heisman race, according to Pro Football Focus

Not only has it given its quarterback time to have big numbers, but Najee Harris is also starting to turn it on and it has adjusted well to elite defensive fronts.

The Vols will have a lot to deal with this weekend, but it has a capable team.

If not for costly turnovers in bad situations, Tennessee could be either 3-1 or 4-0 on the year.

﻿
Prior to facing Tennessee, Nick Saban speaks on Butch Jones’ impact at Alabama
Nick Saban gives update on LaBryan Ray and Carl Tucker
To Top
%d bloggers like this: