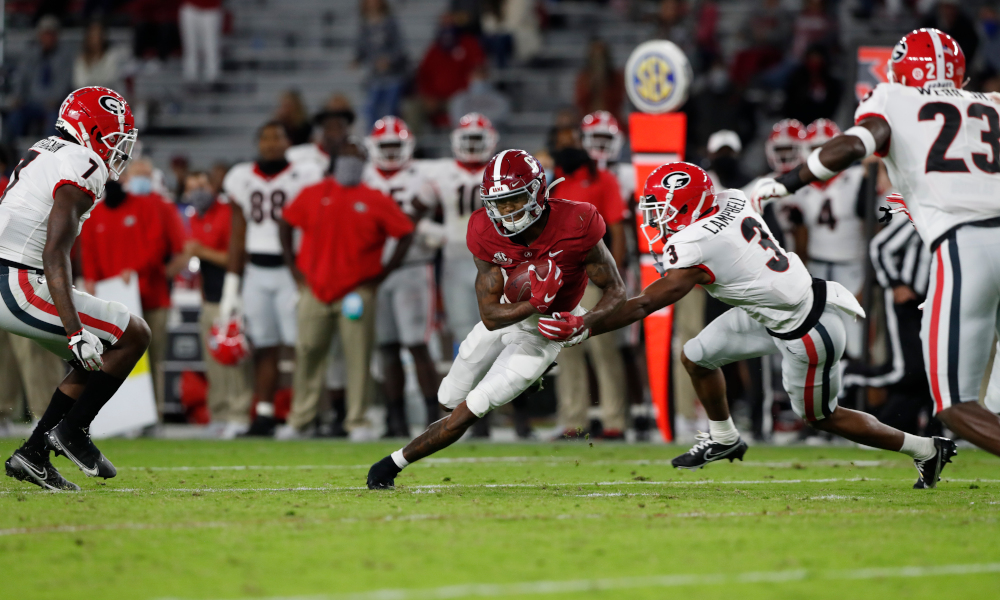 He has accomplished a lot in three years, but has he saved his best work for this season?

It appears to be that way for DeVonta Smith of Alabama football. He recorded two game-winning catches as a freshman, including one in the 2018 College Football Playoff National Championship Game, caught at least 40 passes as a sophomore, and became the Crimson Tide’s leader for receiving yards (1,256) and touchdowns (14) last year.

Through four games this season, he has made routine catches in his sleep and highly difficult plays look easy.

Regardless of his size — 6’1″ and 175 pounds — Smith has the hands, speed, route concepts, toughness, leaping abilities, blocking skills and competitive nature as a complete player.

Prior to the start of the year, many NFL Draft pundits had Ja’Marr Chase of LSU as the first receiver taken in 2021.

With Chase’s decision to opt out of the season, all eyes have been on Smith and he has delivered.

While he is four touchdown catches shy of tying Amari Cooper (31) for most all-time in Alabama history, Smith is after a much bigger prize.

On Wednesday, yours truly of Touchdown Alabama Magazine discussed the senior at wide receiver via In My Own Words.

He leads the team with 38 receptions and has 483 yards with four scores, but is he the best receiver in college football?

I presented my argument in favor of Smith.

Be sure to check out the show on YouTube for TDA every Monday, Wednesday and Friday at 6:00 p.m. CT.