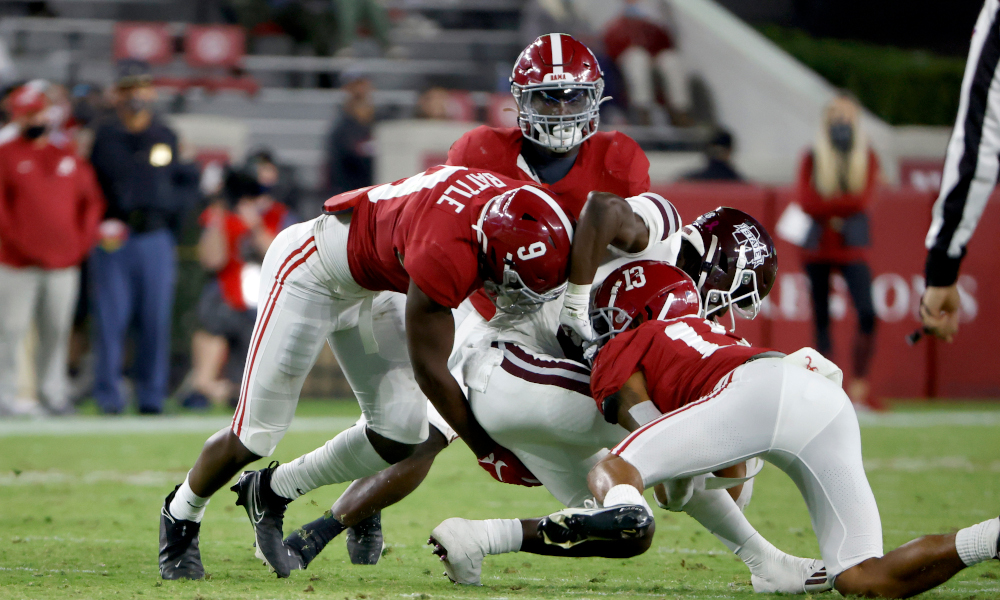 He will finish his freshman season with a few individual awards from Alabama’s coaching staff.

The transition from Hewitt-Trussville (Ala.) High School to the University of Alabama has been smooth for Malachi Moore, in terms of college football. He grabbed the starting job at nickel (slot cornerback, Star) in preseason camp and has become the biggest fan favorite on defense.

Regardless of it allowing 48 points to Ole Miss, Moore has been a huge reason for the Crimson Tide pitching eight shutout quarters — including a complete game shutout of Mississippi State (41-0) last week at home.

Since the contest versus Mississippi, the four-star has been responsible for big plays against Georgia, Tennessee and Miss. State in this conference-only schedule. He recorded his second interception in the meeting with Georgia, returned a fumble for a touchdown against the Volunteers, and led Alabama in tackles (eight) versus the Bulldogs at Bryant-Denny Stadium.

Moore is fifth on the team for tackles (28) through six games. He has three tackles for loss, six pass breakups (team-high), two picks (shares team lead), one quarterback hurry, one forced fumble, one fumble recovery and one defensive score.

People are comparing to Minkah Fitzpatrick, and Pro Football Focus unveiled an insane graphic on Moore.

For him not to allow a touchdown in 229 coverage snaps, his concentration and technique has been perfect.

Moore has benefitted from playing with Patrick Surtain II, Jordan Battle and DeMarcco Hellams among others; however, those guys all knew the potential the freshman brought to the secondary.

His star has a chance to grow even more versus Louisiana State University on next week.

With Ed Orgeron of the Tigers referring to Alabama as his program’s ‘biggest rival,’ Moore has an opportunity to record a couple of turnovers and redeem the team from its loss in 2019.

He is having a strong year and Moore earned his success.