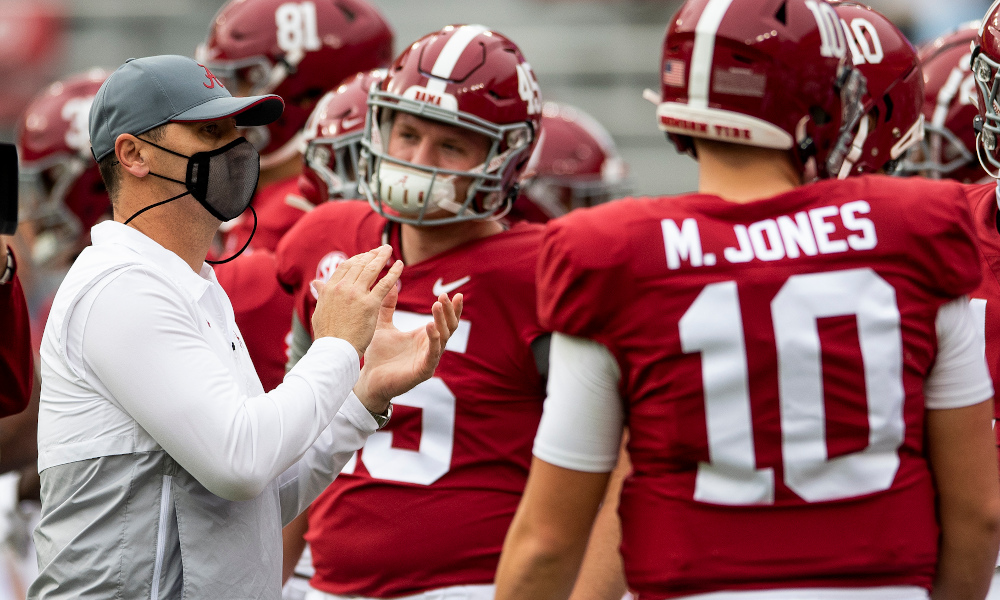 The victory over Auburn in the 85th Iron Bowl was about more than revenge for Alabama football.

Steve Sarkisian entered Saturday’s game with text messages, motivational speeches, encouraging words, and a mentor that prepared him all week. After the final whistle, he can expect to receive phone calls, emails, text messages and letters from Crimson Tide fans who are proud of him. Sarkisian last served as a head coach in 2015 at the University of Southern California.

RELATED: How Alabama fans reacted to to the Tide’s 42-13 win over Auburn

The 46-year-old has endured a lot in his life, including an open heart procedure in the summer, but he has managed to learn from mistakes and surround himself with people that inspire him to be better. Prior to the start of the season, Sarkisian talked about how he was not ready to leave Nick Saban. He views him as a mentor, a friend and someone who pulls the best out of people.

When Saban started experiencing mild symptoms for Coronavirus, he called Sarkisian. The two discussed the game plan for Auburn, but Saban also wanted to assure the offensive coordinator that he was ready for the moment. He operated practice throughout the week and led the Tide onto the field to face Auburn. In a game that could have given fans a horrible feeling to capture 2020, Sarkisian showed the world he can still direct a team.

Not only did Alabama cover the point spread (-24), but Sarkisian produced exceptional offensive balance with Mac Jones, Najee Harris, DeVonta Smith and others in a 42-13 win.

His play calling propelled Jones to career-high five touchdown passes. Sarkisian had his quarterback become the third player in Alabama history to record five scoring tosses in a single game, joining the likes of Tua Tagovailoa and Gary Hollingsworth.

RELATED: This Mac Jones touchdown pass is what makes him an NFL first-rounder

Jones also joined Tagovailoa as the second player in Tide history with five scores in the Iron Bowl. Sarkisian’s balance led to Najee Harris recording 130 yards from scrimmage — 96 rushing, 34 receiving — with one touchdown.

This is the seventh time all year that Harris has totaled 100 yards from scrimmage.

Under the guidance of Sarkisian, DeVonta Smith posted 171 yards receiving with two scores on seven catches. John Metchie had six receptions for 55 yards and two scores, while Jahleel Billingsley chimed in with two catches for 33 yards and one touchdown. With the exception of a lost fumble from Brian Robinson, the Tide did what it wanted to do on offense. Sarkisian coached a group to 8.4 yards per play, 445 yards, six third down conversions (10 attempts) and 28 points combined in the second and third quarter.

Sarkisian’s fire even bleed into the defense, as it held the Tigers under 20 points. Alabama created two turnovers, three sacks, eight tackles for loss and nine quarterback hurries. Auburn had neither a 100-yard rusher nor a 100-yard receiver, and Bo Nix attempted 38 passes.

The Tide is expected to have Saban back for LSU on next week, but this is a major accomplishment for Sarkisian.

He will be a head coach at some point, and it might even be at Alabama.