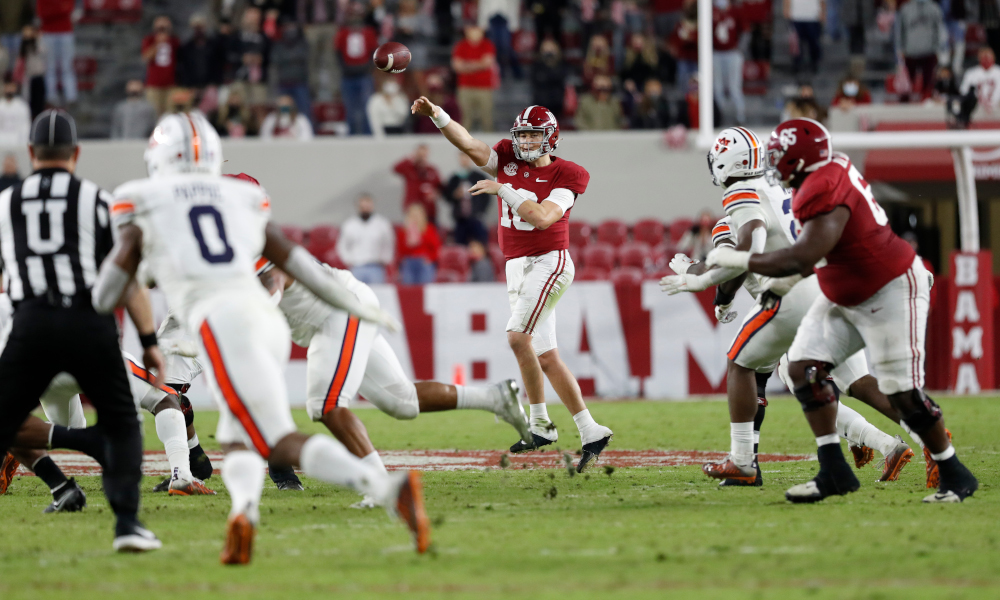 He is at his best when he is having fun, and Mac Jones is enjoying college football.

His leadership and performance on the field not only has Alabama undefeated, but it has also propelled him to win a few individual weekly honors this season. The redshirt junior picked up another accolade to start the week, as the Davey O’Brien Foundation named him for the Davey O’Brien “Great 8” Award after his outing in the Iron Bowl versus Auburn.

He became the third quarterback in Crimson Tide football history to have five scores in a single game, joining both Tua Tagovailoa and Gary Hollingsworth. On top of that, Jones’ five scoring tosses in the Iron Bowl paired him with Tagovailoa as the second player to accomplish the feat at Alabama. He connected with five different receivers in a 42-13 win, while recording two touchdown passes each to DeVonta Smith and John Metchie.

When it comes to his numbers, Jones ranks second in the nation for completion percentage (76.2), sixth for passing yards (2,728), second for passer rating (208) and first for total quarterback rating (95.5). His 23 touchdown passes are tied for fourth in the nation. He is the leading candidate for the Heisman Trophy, and Jones is on pace to win it for Alabama football.

Since 1981, the Davey O’Brien Award has become the National Quarterback Award.

Alabama has yet to have a signal caller win the honor, but Jones could be the first one.