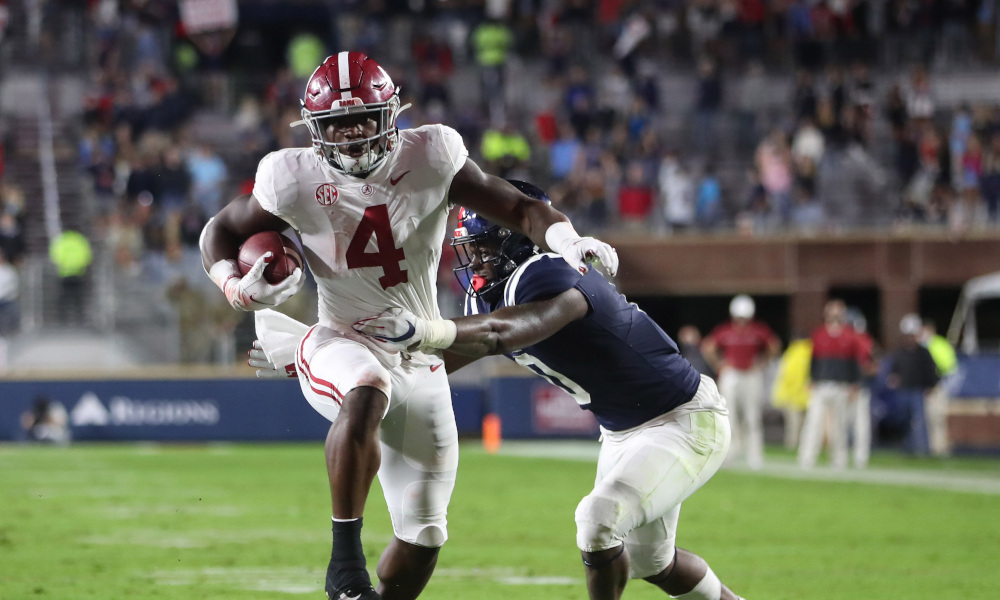 After seeing four student-athletes take the podium at the Mal Moore Athletic Facility on Thursday and declare for the upcoming NFL Draft, there are some players for the University of Alabama that have a decision to make.

Dylan Moses would also toss his name into the draft hat, as he declared via his social media.

The Crimson Tide is looking to have up to seven players selected in the first-round; however, there are those who can actually benefit from returning to school for next season. With the amount of leadership being lost on offense, the Tide could return to a more defensive oriented style under Nick Saban. In capturing his seventh national championship, the 69-year-old is not thinking about slowing down any time soon. He wants to quickly build off this success and put together another team that will buy in.

Despite the return of coaching turnover — among other things — here are some names that will benefit the most in returning to Alabama.

Phidarian Mathis excited every Alabama fan when he announced on Twitter that he will be back for a fifth year.

As a member of the 2017 recruiting class, Mathis is set to be a leader on the defensive front. He will greatly improve his draft value and build off the success he had in 2020. The 6-foot-4, 312-pounder collected 31 tackles (five for loss), 1.5 sacks, three pass breakups, three quarterback hurries and one forced fumble. A native of Wisner, La., Mathis looks to be a first-round selection in the 2022 NFL Draft. Freddie Roach, defensive line coach, is going to get the best out of the former four-star next season.

He has yet to make an announcement, but respectable sources have confirmed with yours truly of Touchdown Alabama Magazine that Christopher Allen is expected to return to school for next season. If he takes advantage of the COVID year, Alabama would be set to dominate at outside linebacker with he and William Anderson. Allen showed how effective he is when healthy, as he was responsible for 13 tackles for loss (team-high), six sacks, five quarterback hurries and two forced fumbles in 13 games.

He grades out as a day two pick for the NFL Draft (third-rounder), but returning to school would better help his stock.

Allen was named second-team All-SEC for his efforts.

Nick Saban has mentioned on occasions about how a healthy LaBryan Ray completes Alabama on defense.

He suffered a foot injury in 2019 — after playing in four games — and missed time in 2020, due to an elbow issue. A former five-star in the 2017 class, Ray also sustained an injury late in his freshman season. When he is healthy, the Madison (Ala.) native is one of the best defensive lineman in the Southeastern Conference. The 6-foot-5, 295-pounder has 10 tackles for loss and five sacks through four years. He needs a full season healthy to show NFL scouts his marketability for any franchise moving forward.

Josh Jobe got better in 2020, but there are still areas in his game that need work.

While his size and physicality may project him as ready for the NFL, his technique, coverage skills and overall discipline needs one final season with Coach Saban. The 6-foot-1, 192-pounder tallied 55 tackles, 2.5 tackles for loss, two sacks, 11 pass breakups, two forced fumbles and one quarterback hurry. He currently projects as a day two pick (third-round), but seeing the growth of Patrick Surtain II to becoming a first-rounder has to motivate Jobe. The talent is there; he needs one year to put it all together.

In joining Mathis, Chris Owens has announced he is returning for another year.

Once a four-star in the 2016 signing class, this will be Owens’ sixth-year with Alabama. He will provide leadership and versatility along the offensive line. Owens has played at center, offensive guard, offensive tackle and tight end throughout his career.

He would have projected as a day three pick (fifth-round) if he declared for the NFL, but this gives him a chance to improve his value. Should the Tide not get a return from Landon Dickerson, expect to see Owens potentially start at center next season.

The departure of Najee Harris to the NFL Draft opens a chance for Brian Robinson Jr. to be the featured running back.

He has been a solid complementary piece for four seasons, but he has the talent to be a starter. If he returns, the Crimson Tide would have the tandem of Robinson and Trey Sanders with Jase McClellan bringing a change of pace into the mix.

Even though Alabama has Roydell Williams, Kyle Edwards, Camar Wheaton (five-star freshman) and Keilan Robinson, the Tuscaloosa native has all the tools be the primary rusher. Robinson’s six rushing touchdowns in 2020 was a career-high for him.

Prior to suffering a serious knee injury in the SEC Championship Game versus Florida, Landon Dickerson was on pace to be a first-round selection. The 6-foot-6, 325-pounder won the Rimington Trophy and brought the intensity to an offensive unit that captured the Joe Moore Award. Dickerson earned Unanimous First Team All-American honors and anchored the most explosive offense in college football. He can probably still go in the first round, if he heals up and tests well at the NFL Scouting Combine, but there is a possibility he returns. In the event Dickerson does come back, Alabama’s offense would set up to repeat its success.