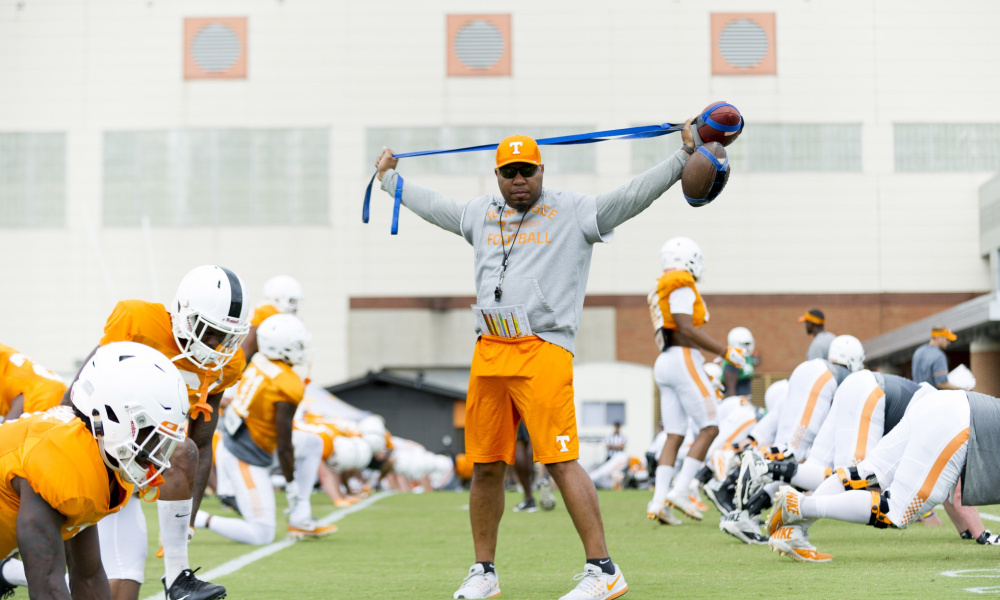 Even after losing a good coach and great recruiter in Charles Huff, Nick Saban looks at the fans and players of Alabama football and asks ‘will you just trust me?’

According to respectable sources, yours truly of Touchdown Alabama Magazine learned on Saturday that Saban had targeted Huff’s replacement and reports from other media outlets have confirmed the news.

Robert Gillespie of North Carolina is expected to be hired as the Crimson Tide’s new running backs coach. At 41 years old, he has ties to the Southeastern Conference and is an exceptional recruiter too. In bringing in Gillespie, Alabama would have not drop off in production for its rushing attack.

Sources: UNC running back coach Robert Gillespie has been targeted to be the next RB coach at Alabama.

Prior to having 16 years of coaching experience, the native Mississippian was a running back at the University of Florida from 1998 to 2001.

As a student-athlete, Gillespie was taught by Steve Spurrier and carved out success from one of the best offensive coaches in college football.

He shared time in the backfield with Earnest Graham, but Gillespie still made plays as he recorded 1,854 yards rushing with 16 touchdowns on 374 carries in 42 games.

He also displayed versatility at receiver, totaling 96 catches for 1,091 yards and four scores.

Gillespie was named a team captain in his senior season (2001) and posted a 39-11 record in his tenure. He was a part of three 10-win seasons, four bowl appearances and two Orange Bowl victories with the Gators.

After earning his bachelor’s degree in exercise and sports science in 2005, Gillespie started his coaching career as an offensive graduate assistant at South Carolina. He would then be hired at running backs coach and for three years (2006-08), he tutored Cory Boyd and Mike Davis into becoming 500+ yard rushers. Both players were skilled pass catchers too, especially with Boyd tallying 71 receptions for 811 yards with three touchdowns in two years. The Big 12 Conference came calling for Gillespie and Oklahoma State benefitted greatly in 2009 and 2010. He produced his first two 1,000-yard backs in Keith Toston (2009) and Kendall Hunter (2010). Toston had 1,218 yards and 11 scores, while Hunter posted 1,548 yards with 16 scores.

Both backs caught at least 20 passes under Gillespie.

He has been at North Carolina since 2018 and Gillespie has witnessed three 1,000-yard campaigns.

For Alabama, this is a home run hire because Gillespie will know how to relate to each player on the roster. With him splitting time in college, he can speak to what Brian Robinson, Trey Sanders, Jase McClellan, Roydell Williams, Kyle Edwards, Keilan Robinson and potentially, Camar Wheaton have to endure. When it comes to him as a recruiter, Gillespie was the primary coach behind his programs landing Hurd, Kamara and Ty Chandler. He has played the game and he can relate to today’s athletes.

Gillespie is a big-play move for Alabama.