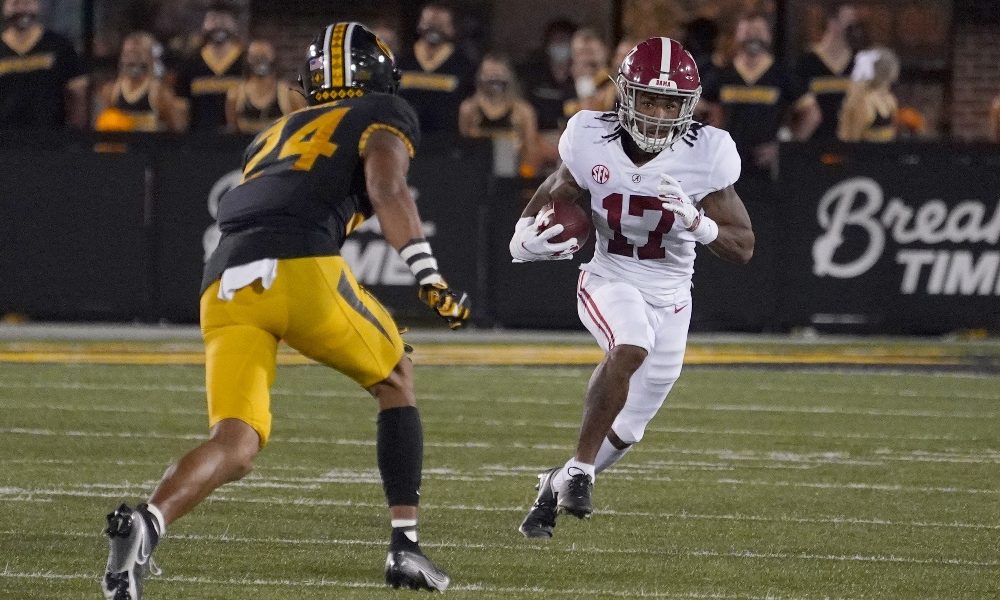 Since he put on an Alabama uniform, college football fans have been enamored with the speed of Jaylen Waddle.

From taking short five-yard passes to the house, to blowing past multiple defensive backs for 60-yard bombs, Waddle has used his speed in a multitude of ways to beat defenders and make coaches scratch their heads.

His on-field speed at Alabama has only had one true rival while he was at the school and that was the speed of his teammate Henry Ruggs.

Ruggs, who is now a receiver for the Oakland Raiders, famously raced Waddle last year during a viral video taken inside the team’s training facility. It was unclear who the winner was between the two speedsters, but Waddle revealed that there was a second race and this time there was a winner.

“Me and Ruggs raced twice I think my sophomore year after a workout,” Waddle said during an interview with CBS Sports last week. “The first one they say was a tie, and then the second he did beat me. He beat me by like a step or so but he did beat me.”

Waddle shouldn’t take any shame in losing to someone like Ruggs who ran the 40-yard dash at the NFL Combine in just 4.27 seconds.

Coincidentally, Waddle was also asked what his best 40-yard dash time was and what he believes he can clock in at in the future.

It looks like Waddle is right there with Ruggs, especially when he’s healthy. This past season Waddle had to battle through an ankle injury which was presumed to end his season prematurely during the opening kickoff of the Tennessee game.

But Waddle was able to work his way back into action and return for the national championship game against Ohio State where he caught three passes for 34 yards and impressed many across the country for his grit and desire as he was obviously not completely healthy.

Waddle is currently valued by most as an early to mid-first-round pick in the upcoming NFL Draft, and if his speed gets better with his health then general managers will be eager to add him to their respective teams.