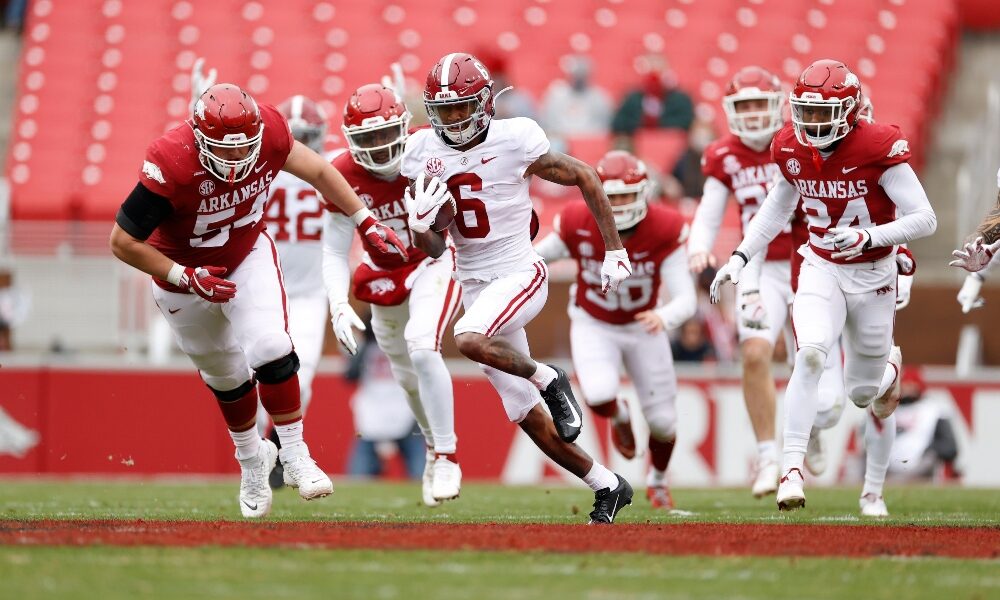 On Monday, DeVonta Smith told reporters he will not participate in on-field drills at Alabama’s Pro Day.

This includes the 40-yard dash, as fans will not see the 2020 Heisman Trophy winner test his speed.

He stated that he will weigh in for Tuesday’s event, but he is there to support his teammates.

Now, the burning question is how fast can DeVonta Smith run in the 40? During the media day at the 2018 Capital One Orange Bowl, Smith and Henry Ruggs III had a friendly argument on who was faster. Smith boldly declared he would win the 40-yard dash and 200-meter race, while he said Ruggs would take the 100 meters.

Ruggs, who was taken at No. 12 overall in the 2020 NFL Draft, clocked a time of 4.27 seconds in the 40 at the NFL Scouting Combine. He is currently tied for the fourth-fastest time in combine history since 1999.

DeVonta Smith is fast. How fast? He once confidently said he could beat Henry Ruggs in a 40-yard race.

Ruggs clocked a 4.27 40 at the NFL Combine last year and believed it should have been faster… 😲

According to a couple of his former teammates and spring testing in recent years, Smith has clocked a time between 4.30 and 4.50 in the 40.

He is not expected to run a lower time than 4.50, especially with how smooth he is. As the Tide’s all-time career leader in receiving, Smith told Greg McElroy of SEC Network that he will likely not participate in either of Alabama’s pro days.

He is looking to conduct a private workout with NFL teams.