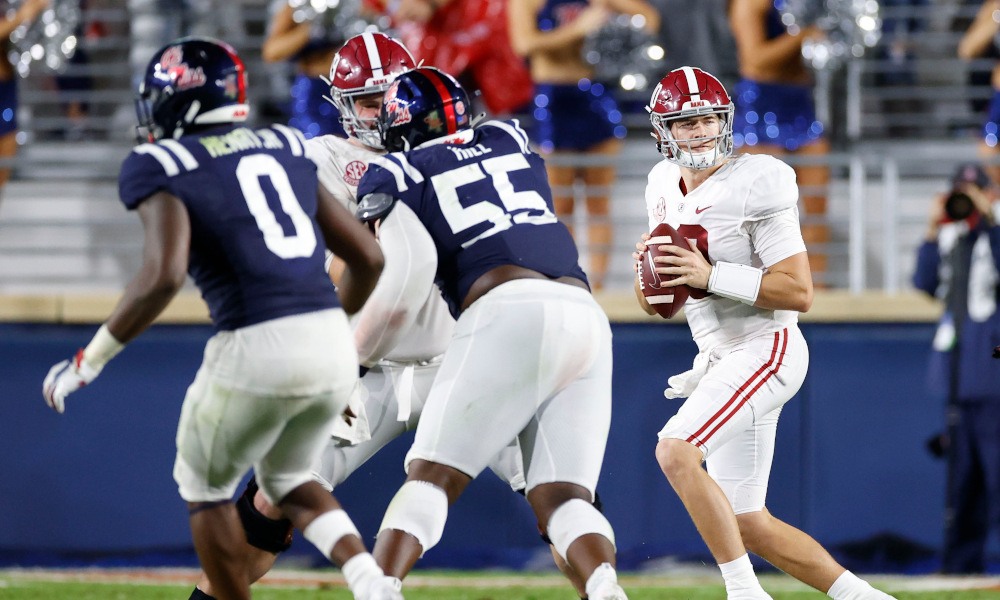 The lead-up to the NFL Draft just got a whole lot more interesting after the report by ESPN sharing that the San Francisco 49ers and the Miami Dolphins had reached an agreement on a trade involving both of each other’s first-round picks.

Blockbuster deal with massive ramifications for years to come. pic.twitter.com/nRLMUaWGo5

Following the pick swaps, the Niners now own the third overall pick in the upcoming draft, and typically when a team gives up this many assets it means they are likely looking to select a quarterback. In previous mock drafts BYU quarterback Zach Wilson, Ohio State’s Justin Fields and North Dakota State’s Trey Lance have all flirted inside the top five.

But what if the man for San Francisco is none of those players.

What if it’s Alabama’s, Mac Jones?

Well, one report by NFL Network’s draft specialist Daniel Jeremiah has been floated out on the internet that Jones could be in play for the third overall pick.

Now @MoveTheSticks is mentioning that Mac Jones shouldn't be ruled out as a potential fit for SF at #3.

Jones’ efficient passing should be intriguing to an offensive mind like Kyle Shannahan and now his proven mobility following his Pro Day should be an added plus to his draft stock. NBC Sports Chris Simms is one analyst who believes that if the Niners want a quarterback who is NFL ready then Jones is the man.

49ers-Dolphins…Kyle Shanahan trying to control his own fate. You trade up to 3 for a QB who is NFL-ready right now, not a project. And to me that says Mac Jones.

The consensus is still that San Francisco will stick with Jimmy Garoppolo, at least for the 2021 season, but after last year it’s nearly time to flip the hourglass on the former New England Patriot and restart.