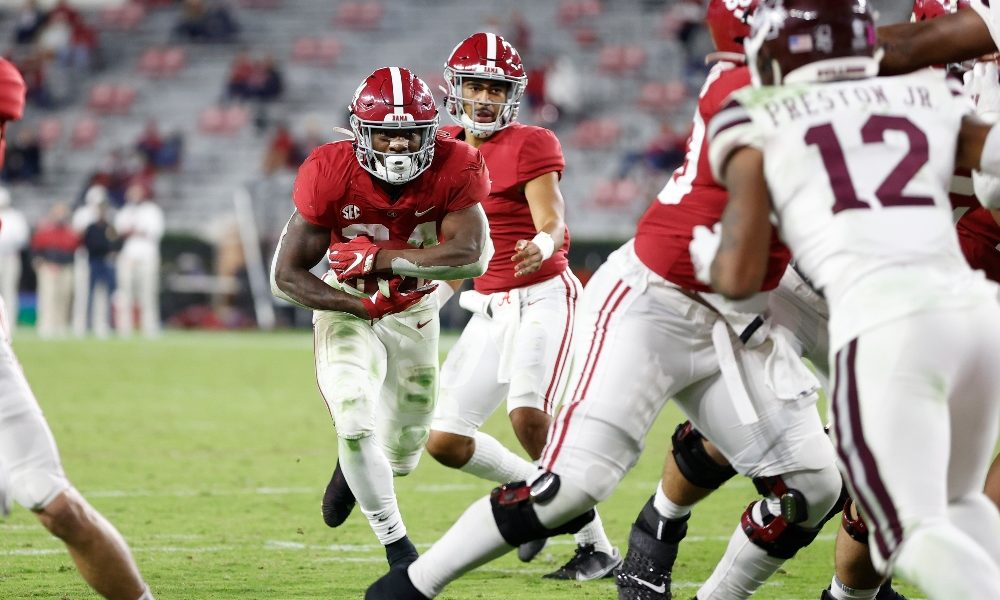 We have reached our fourth running back profile, and this one is on Trey Sanders.

–Summary: Trey Sanders has all the physical tools to be an unstoppable running back; however, can he shake free of the injury bug?

This is the question that fans of Alabama football have for him. Before the mishaps, Sanders was a promising five-star prospect from IMG Academy (Bradenton, Fla.) in the 2019 recruiting cycle.

The 6-foot, 214-pounder was on the verge of serious playing time as a true freshman, until a foot injury occurred.

Sanders would miss the entire 2019 campaign as his foot required surgery. He took a medical redshirt and watched his teammates obtain an 11-2 record that included a 35-16 victory over Michigan in the Citrus Bowl. As a redshirt freshman, he gained some carries versus Missouri, Texas A&M, and Tennessee.

Sanders has limited success in those matchups, but his moment came at Bryant-Denny Stadium versus Mississippi State. Alabama fans saw the speed, vision, and power to finish runs that Sanders displayed in high school. He had a couple of 20+ yard runs, including a long run of 25 yards that excited the crowd.

He ended the game with 12 carries for 80 yards, and people felt that Sanders was about to break out.

Unfortunately, the success was short-lived.

He would later be involved in a horrible car accident, which left him with serious injuries. Sanders had surgery on his hip and watched his guys go on to defeat Ohio State to capture a College Football Playoff National Championship. He is doing well in rehab, and Coach Saban said Sanders has advanced to dry running.

He has been able to do some individual drills at spring practice, but it will be interesting to see if Alabama chooses to push Sanders to participate in the A-Day Game. The redshirt sophomore totaled 134 yards rushing on 30 carries in 2020.

Sanders possesses a skill set that needs to be on the field. He has the traits to be a game-changer, but he has to avoid injuries.

He has to fight to get carries, but this spring is important for Sanders.