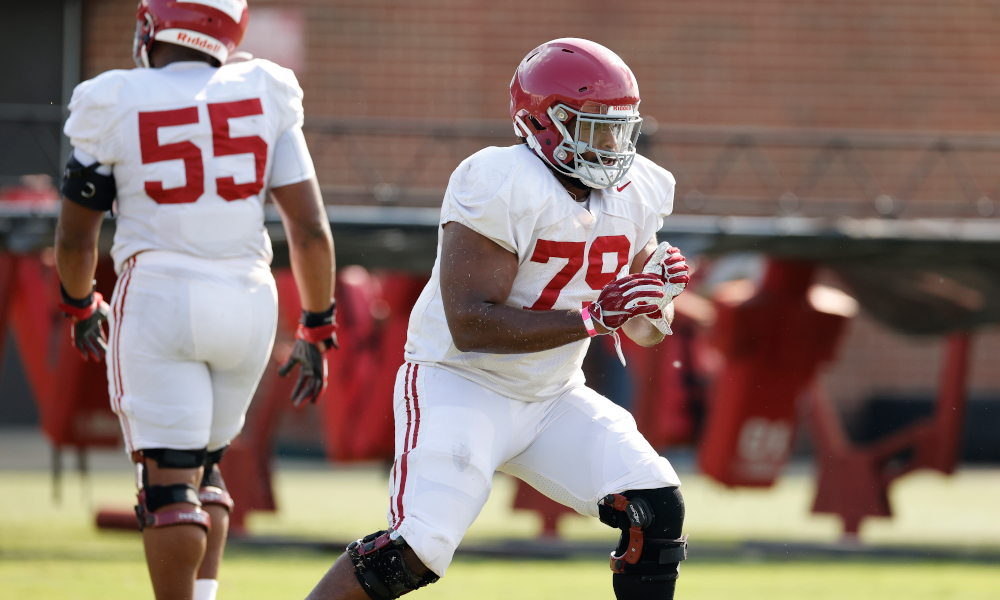 Alabama fans were worried heading into the 2020 College Football Playoff, but he silenced all fears.

A knee injury to Landon Dickerson versus Florida in the Southeastern Conference title game forced Chris Owens to anchor the Crimson Tide’s offensive front against Notre Dame and Ohio State. He played well in both games as he assisted Mac Jones to 761 passing yards with nine touchdowns, and Najee Harris to 204 rushing yards, 109 receiving yards, and three scores.

Owens filled in admirably and helped the Tide capture a national title. He could have pursued the NFL Draft with Dickerson, Alex Leatherwood, and Deonte Brown, but he decided to return to school.

Owens, a native of Arlington, Texas, came to the University of Alabama as a four-star in its 2016 recruiting class. He has served at every position on the offensive line, including reps at tight end during his tenure.

He took advantage of the Coronavirus pandemic and chose to have his sixth season with the Crimson Tide. In speaking with reporters on Monday, Owens explained why returning to Alabama was the best move for him.

“Part of it was the ability to learn from a bunch of NFL coaches,” Owens said. “I feel like if I would have entered the draft this year, I probably would not have gone to where I wanted to. So, knowing that Coach Saban is going to bring in some reliable guys with experience, I feel like it would be just as good as going to the next level.”

Despite playing in 38 career games across five years, Owens believes there are still areas he needs to improve in.

He will be Alabama’s starting center in the fall, and he is building a relationship with his position coach that was once with his favorite team in the National Football League. Doug Marrone, 56, was the offensive coordinator/offensive line coach for the New Orleans Saints from 2006 to 2008. When reporters asked Owens about working with Marrone, he lit up and said ‘he’s great.’

“He has all sorts of stories going back from Syracuse to when he coached for my favorite team, the Saints,” Owens said of Marrone. “That was one of the first things we clicked on. He named offensive linemen from that team, and of course, he coached Cam Robinson when he was here. He has coached a lot of great players, and I think the lessons he has dating back to before I was even born are still applicable for today. I get to talk to him every day, and he gives his wisdom to everybody. He’s open to everyone.”

Marrone became the head coach at Syracuse University in 2009, but his offensive line in New Orleans went on to help the franchise capture its first Super Bowl that season. He has a wealth of experience with offensive linemen and tight ends.

RELATED: Bryce Young had a great first scrimmage for Alabama. What does it mean for the Tide moving forward?

The Crimson Tide has talent on its offensive unit, but it is also a young group. Some fans are worried about the front being a weakness in the fall, especially after last year’s group won the Joe Moore Award. Owens sees potential with the line, but he urges people to be patient. It is not easy to replace two Unanimous All-Americans and three starters that are off to the next level.

“We are not going to be where we are supposed to be right now, because it’s only the middle of the springtime,” Owens said. “Especially on the offense. We have a lot of guys returning at receiver and tight end. We have a new O-Line, a new quarterback, everything is new for us. We are going up against a really good defense every day. So for us, it’s about being patient and trusting the process knowing things are going to come along eventually. We just can’t rush them, we have to take things day by day.”

Owens’ experience is important because he will mentor the young players that will have to learn different positions. He and Evan Neal are running the line this spring. Emil Ekiyor (sports hernia) will join the duo in the fall as the third experienced veteran.

Alabama will have its second game-like practice on Saturday. The offensive line looks to improve and have a bounce back showing.