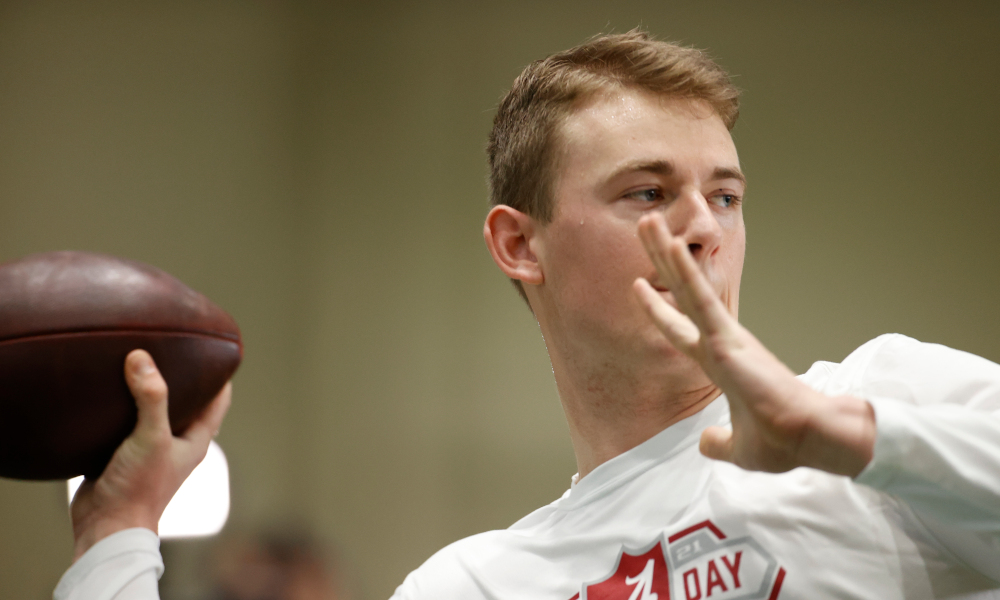 It did not take Alabama fans long to see the passion Mac Jones has on the field.

He stepped up for an injured Tua Tagovailoa in 2019 and captained the 2020 team to a national championship. Jones is a perfectionist in an imperfect world, and that is why Bill Belichick took him at No. 15 overall in the NFL Draft. The native Floridian possesses an unquestioned work ethic. He has earned Belichick’s respect and his workload has increased at mandatory minicamp.

When he makes a mistake, the 2020 Consensus All-American gets upset with himself.

According to ESPN’s Mike Reiss, Jones tossed an interception during today’s practice and was visibly frustrated. He nearly punched the ground because he does not like turnovers. The 6-foot-3, 214-pounder threw only four interceptions in his lone season as a starter for the Crimson Tide.

Mac Jones said that he knows he’ll have some good days, and some bad days, but that he will keep working through it all. Today, he showed the most visible frustration media members have seen after throwing a pick to DB Dee Virgin. He wound up and nearly punched the ground after.

Despite the mistake, he told reporters that he will keep working through it all. Trent Brown, a seven-year veteran, appreciates Jones’s competitive nature. As a seventh-round pick of the 2015 draft, Brown is back in New England.

He was there in 2018 to assist the Patriots to an AFC Championship and a Super Bowl as an offensive tackle. Brown told the media that you can’t really refer to Jones as ‘a young guy.’

The former three-star recruit is still pushing Cam Newton for a chance to be the starter.

OT Trent Brown on QB Mac Jones: “He’s a young guy but you can’t really just refer to him as a young guy; you can tell he’s been at a place where’s got some coaching. And I think he’s going to be special in the future.”

“You can tell he’s been at a place where’s got some coaching,” Brown said of Jones. “And I think he’s going to be special in the future.”

Nick Saban coached Jones hard, and it allowed for him to grow.

His attention to detail guided him to a single-season school record for passing yards (4,500) and 41 touchdowns. Jones led all quarterbacks in college football for completion percentage (77.4), passing yards, passer rating (203.1), and total quarterback rating (96.1) in 2020. He is not going to master the professional game overnight; however, it’s good to see the effort he has.