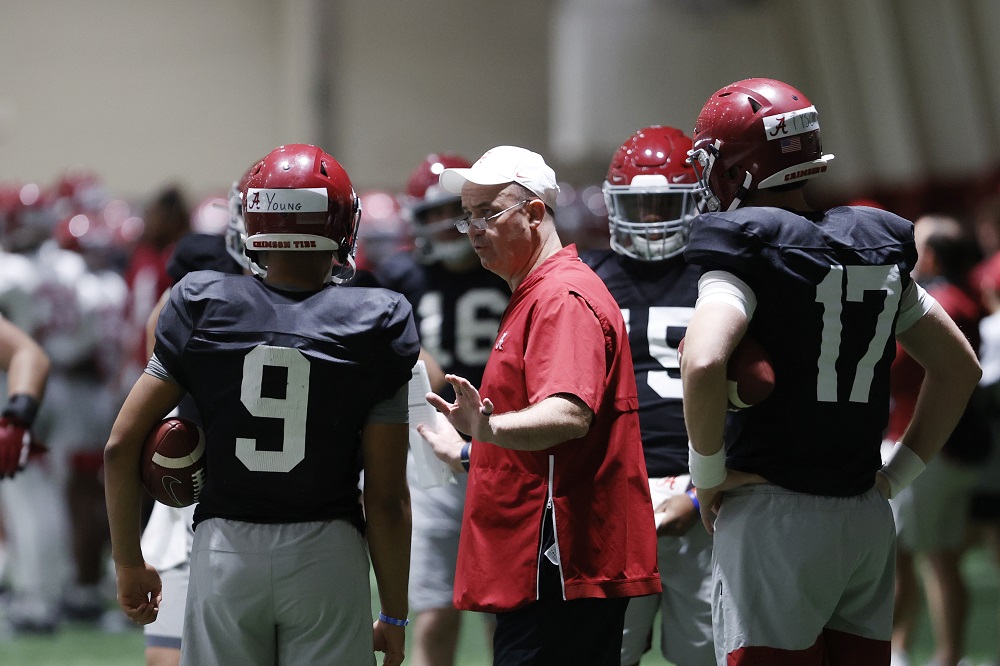 Some had doubts about him replacing Steve Sarkisian, especially after the debacle with the Houston Texans.

RELATED: Alabama OL Chris Owens reveals what he wants to do after football

As he has done with others, Nick Saban took a chance on O’Brien and believes he can continue the offensive evolution of the Crimson Tide.

Alabama has had six practices in fall camp, and Thursday was its first session in full pads.

On Sunday, the Tide held its football media day at the Mal Moore Athletic Facility. Coach Saban, O’Brien, and Pete Golding all spoke to reporters via Zoom, and Saban had an interesting assessment on his offensive coordinator.

He has to develop sophomore quarterback Bryce Young and craft an explosive offense, but Saban said the 51-year-old has done a ‘really good job’ since being hired in the spring.

“First off, he’s a good teacher,” Saban said of O’Brien.

“And I think when you are a good coach, you are a good coach all the time. Whether we are in camp with seventh and eighth-grade kids, you are trying to coach those guys to be better like our own players. I see that in everything he’s done since he’s been here. I think the players have responded well to the coaches on offense, so there has been nothing but positives.”

O’Brien has never coached with Saban, but he is happy for the opportunity. He stated that he is not trying to change Alabama’s offensive philosophy. Since hiring Lane Kiffin in 2014, the Crimson Tide has increased its scoring average each season.

He has a huge responsibility; however, the players like O’Brien. John Metchie, a junior wide receiver, is confident that Alabama will not lose any offensive momentum with O’Brien. Others have stated their excitement to collaborate with the former NFL head coach in continuing the Crimson Tide’s dominance. Chris Owens, a sixth-year senior, compared O’Brien’s intellect to his own.

“He is amazing,” Owens said Thursday about O’Brien. “You can tell the progression the quarterbacks have had going forward, especially the offense in general. When it comes to the quarterbacks, all of those guys have grown. Whether it’s pre-snap, post-snap decisions, he breaks down everything we need to do. He relies on us to execute it, and he holds us accountable for it.”

Owens said Alabama is ‘blessed’ to have O’Brien in the building.

The Tide opens its regular season versus Miami at Mercedes-Benz Stadium on Saturday, Sept. 4 at 2:30 pm CT.