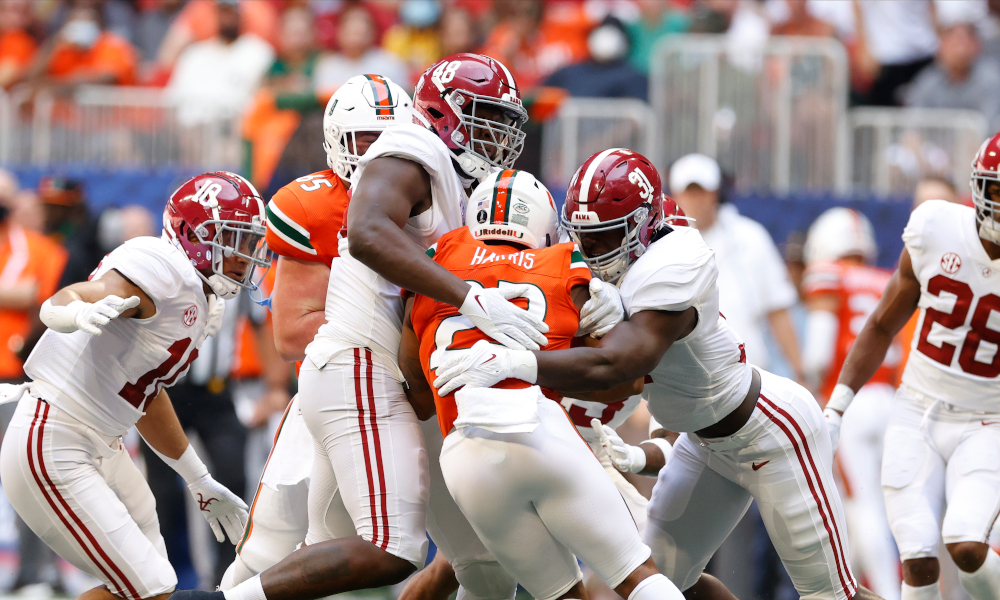 Miami could have sent numerous diss tracks at Alabama, but the Crimson Tide had a bigger mission.

Nick Saban used Manny Diaz and the Hurricanes to send college football a message. The message was received on Saturday, as Alabama football is back on defense. After three years of getting picked on, the Tide bullied Miami’s offense at Mercedes-Benz Stadium to open its season. Despite recording a touchdown pass, D’Eriq King did not have a balanced outing at quarterback.

RELATED: Christopher Allen suffered a ‘pretty significant’ foot injury and could be lost for the season

Each of the four recorded at least one sack. Miami totaled just 87 yards rushing on nearly three yards per carry.

Coach Saban saw his defense create three turnovers, including two interceptions off King. With the addition of Henry To’oto’o at middle linebacker, Alabama flew to the ball and made a lot of plays. The Hurricanes failed to convert eight third downs (six of 14) and were stopped on the goal line during a fourth-down play. Alabama held Miami to 13 points and 266 yards of total offense.

Unfortunately, the Tide also suffered some injuries. Allen sustained a leg injury in the first half. He did not return for the remainder of the game. Brian Branch was banged up, and To’oto’o took a shot in his elbow and was seen with a brace on.

According to Saban, Allen (foot) has the lone significant injury. He will likely miss the rest of the season, and it’s a blow to Alabama’s defense. The fifth-year veteran is an elite pass rusher, but Saban has all confidence in Drew Sanders.

As for Branch and To’oto’o, Saban said their injuries were not serious.

The Tide dominated at a cost, but it showed its defense has returned to elite status.