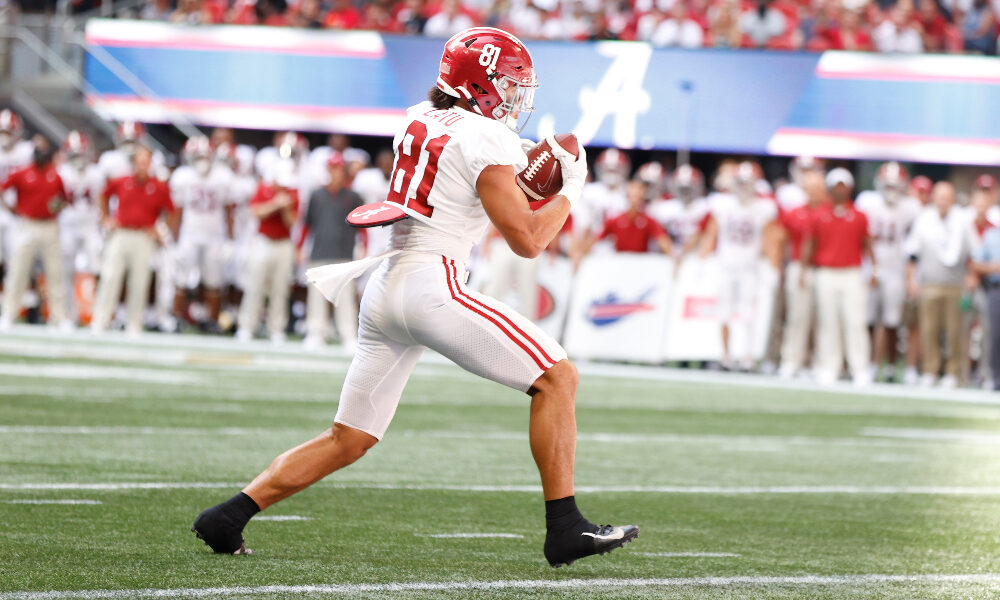 It’s been a long and strange road to playing time at Alabama for tight end Cameron Latu who made his first career start against Miami on Saturday.

The Salt Lake City, Utah native made the most of his first opportunity by catching three passes for 43 yards and a pair of touchdowns for the Crimson Tide.

“Touchdowns felt great,” Latu said following the team’s 44-13 victory. “But it felt even better knowing that I helped my team gain a victory and I know we’re going to build off this week and get better for next week. And receivers played great and we’re just going to get better.”

Latu, has spent the past two seasons primarily serving in a reserve role for the Crimson Tide. But when expected starter Jahleel Billingsley had off the field issues which impacted his playing time, Latu was called upon to step in.

Despite not expecting to be the primary option, Latu’s connection with new starting quarterback Bryce Young was profound, as the two had great timing on both of his scoring receptions.

“Yeah it’s a lot of work in the offseason,” Young said. “A lot of reps in practice, a lot of reps after practice with us getting on the same page. And I think that’s the key with any good offense, making sure everyone’s on the same page. We’ve been working on building that connection. Obviously me and Cam been doing it, rest of the receivers, everyone on the offense has been working this offseason to build that connection.”

Young and Latu gave a glimpse of their chemistry all the way back during Alabama’s A-Day game in the spring. The two linked up for a long touchdown pass, which was one of the few scoring plays from that day.

“Yeah, I say we got a good connection but it just all comes from the hard work that we do day in and day out,” Latu said. “Everybody usually does, is a piece of that offense and just repetition.”

Latu had originally arrived at Alabama as an outside linebacker, but when it was apparent he’d have difficulty rising up the depth chart and since there was a need at tight end, head coach Nick Saban decided to have him make the transition.

“You know, Cameron came to Alabama as outside linebacker. And you know we had a need for tight end,” Saban said. “He also played tight end in high school. So I think before last season, you know, I said, ‘You know I think you have a lot better shot to be a tight end. You got good hands, you got great size, you’re a good athlete.’ And he bought into it.

“And it’s taken a little bit of time for him to develop and feel comfortable and confident at the position. But I was encouraged. And I think the success that he had today will build confidence. And I think that’s really important, especially when you have a lot of new players that have — don’t have a lot of experience.

“When they get in the game and they have some success, that really helps their confidence. And you know, hopefully it will help them continue to develop and improve.”

Latu also commented on his journey from linebacker to tight end.

“I came in as an outside linebacker and a year later we was just low on tight ends and they just wanted to see if I could fit into that scheme on offense and see what I could do to fill a little void from having less tight ends, and it was a pretty deep outside linebacker group,” Latu said. “So I just took a chance and trusted the coaches and just put in work day in and day out and it just was good.”

With 11 regular season games still to come, Latu still has more opportunities to shine and grow in this offense.