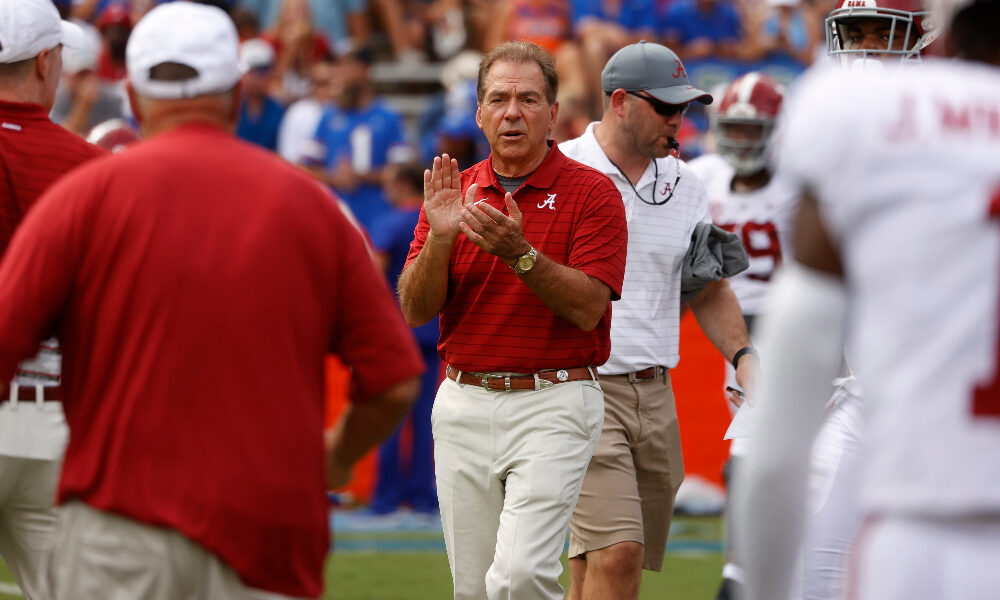 Officials from the Bobby Dodd Coach of the Year Foundation and Peach Bowl, Inc. today announced that Alabama head football coach Nick Saban has been selected as The Dodd Trophy Coach of the Week presented by PNC.

The Dodd Trophy Coach of the Week award honors a football coach who led his team to a significant victory during the previous week, while also embodying the award’s three pillars of scholarship, leadership and integrity.

The Alabama Crimson Tide secured a top-15 win on the road defeating No. 11 Florida 31-29 in Gainesville. The Tide jumped out to a 21-3 lead in the first quarter and held off a late Gator rally to extend the program’s overall winning streak to 17 games, along with a 32-game winning streak against the SEC East. Sophomore quarterback Bryce Young continued his impressive start to the season in his first true road game with three first quarter touchdowns and finished with 233 yards in the air. Defensive back DeMarcco Hellams led Alabama on defense and recorded a team-high 11 tackles and a game-best six solo stops.

Under Saban, Alabama is now 42-3 against the SEC East, holds a 52-9 mark in road games and moved to 14-1 in SEC road openers. The Crimson Tide’s win over the Gators was Saban’s 92nd career win, and 69th at Alabama, against the Associated Press Top 25. Saban is currently third in all-time road wins against teams ranked in the AP Top 25 with 25 wins.

“This was another significant victory for Alabama that now puts the Crimson Tide in the driver’s seat for the SEC West and another College Football Playoff bid,” said Jim Terry, chairman of the Bobby Dodd Coach of the Year Foundation. “Coach Dodd would have appreciated Coach Saban’s ability to keep his team poised in a hostile road environment and a highly competitive game against a solid Florida team.”

Saban is now in his 15th season with the Tide after being named the head coach at Alabama in 2007. During his time in Tuscaloosa, he has led the Tide to an impressive 173-23 mark, including six national titles and seven SEC championships. Dating back to the start of the 2008 season, Alabama has won 166 games under Saban, which is the most in the Football Bowl Subdivision.

Off the football field, Saban has led the Crimson Tide to an impressive Academic Progress Rate of 990 in the classroom, and the SEC Academic Honor Roll for the 2020-2021 school year featured 47 Alabama football players. Under Saban’s leadership, a multitude of players have been awarded for their academic achievements, as well as their work in the community. Most recently, starting offensive lineman Chris Owens was honored by the Wuerffel Award Watch List for his community service work earlier this year. In the 2020 season, Alabama’s starting quarterback Mac Jones and center Landon Dickerson were named CoSIDA 2020-21 Academic All-American First Team, while running back Najee Harris was named to SEC Football Community Service Team for his “superior service efforts.”

In the community, the Saban family recently announced plans for The Saban Center in Tuscaloosa, which will create a learning center on the Black Warrior River that brings together the Children’s Hands-On Museum, Tuscaloosa Public Library and the Tuscaloosa Children’s Theater. Saban also created his own charity, the Nick’s Kids Foundation, a non-profit organization dedicated to supporting children, family, teacher and student causes. Before the start of the 2020 season, Saban and his wife donated large amounts to both the Jimmy V Foundation for cancer research and the United Way Community Fund in response to the COVID-19 pandemic.

“Coach Saban continues to set records both on and off the football field,” said Gary Stokan, CEO and president of Peach Bowl, Inc. “Nick is a former winner of The Dodd Trophy, and truly epitomizes everything that the award stands for. What he’s been able to achieve throughout his career is truly unparalleled and he continues to make his mark as one of the greatest coaches to ever coach the game.”

The Dodd Trophy presented by PNC – along with the Dodd Trophy Coach of the Week Award – celebrates the head coach of a FBS team who enjoys success on the gridiron, while also stressing the importance of scholarship, leadership and integrity.

A panel consisting of all previous winners, national media, a member of the Dodd family and a College Football Hall of Fame member will identify the final list of potential recipients at the conclusion of the 2021 season. The winner of the 2021 Dodd Trophy will be announced in Atlanta during the week of this year’s Chick-fil-A Peach Bowl.

**This information was acquired from a recent press release from the Bobby Dodd Coach of the Year Foundation.**