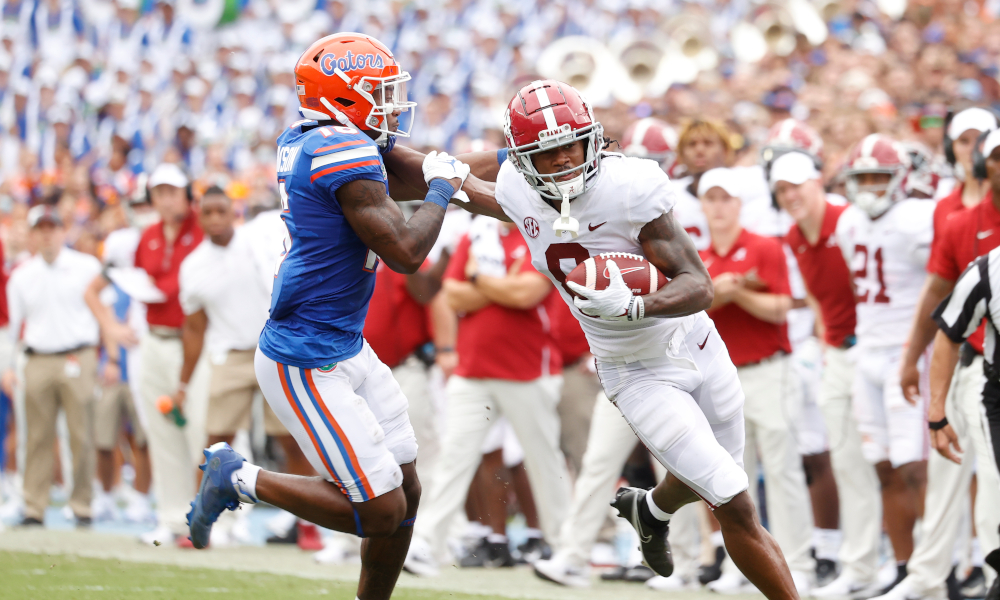 In Monday’s presser, Nick Saban identified an area of improvement for Alabama football.

We knew it would be difficult for the Crimson Tide to replace four first-round picks at wide receiver.

Players like Jerry Jeudy, Henry Ruggs III, DeVonta Smith, and Jaylen Waddle are hard to replicate. All four individuals brought different skill sets to the team; however, they were consistent route runners. The quartet knew how to create separation from defensive backs in man-to-man coverage. Whether it was setting up defenders with moves or breaking off routes at the right time, Jeudy, Ruggs, Smith, and Waddle made it easy for whoever Alabama had at quarterback. Coach Saban has a solid group of offensive targets, but he wants to see more explosive plays from them. Bryce Young suffered dropped passes versus Florida, including some from John Metchie and a dropped touchdown from Slade Bolden.

Timing is essential offensively for the Tide.

“I think we want to develop more consistency at the position,” Saban said of Alabama’s wide receivers. “I think we need to continue to work on separation from man-to-man coverage.”

It is not as hard to find openings in zone coverage versus man-to-man defense.

Receivers have to be perfect on routes while executing different techniques to free themselves in man-to-man. Alabama had two explosive touchdowns from the position during its season opener against Miami.

Since then, it has been an issue for receivers to get open for Young at quarterback.

According to Saban, Southern Mississippi has a good defense. Alabama will host the Golden Eagles on Saturday at Bryant-Denny Stadium.

Metchie, Jameson Williams, Bolden, and others know what they have to do this week.