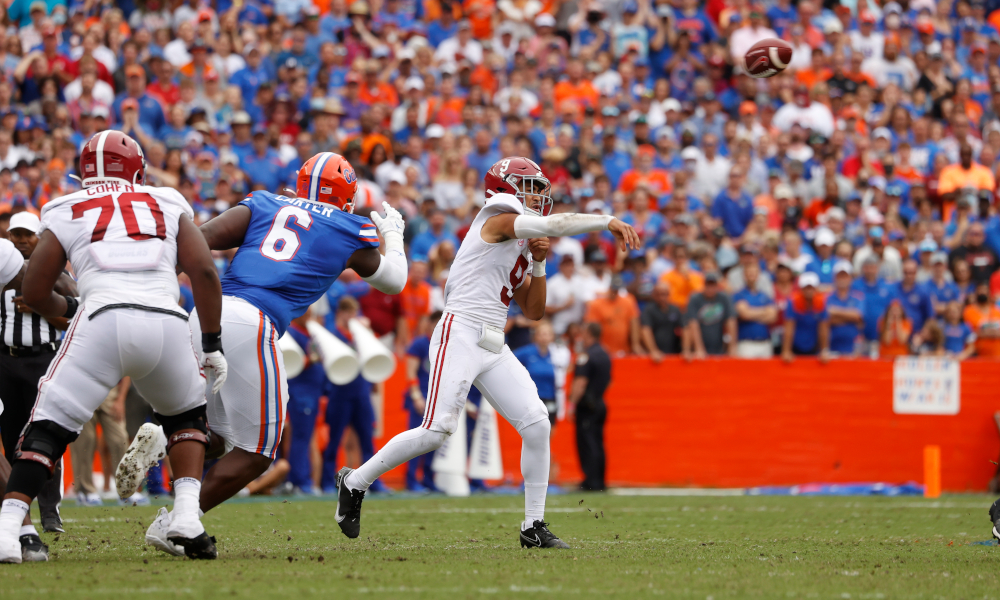 Bryce Young has handled the pressure of being Alabama’s starting quarterback well through three games.

He came out on fire versus Miami, and adversity did not rattle him during the next two matchups. The California native endured a hostile environment last week; however, he did not have any critical mistakes. Young tossed three touchdowns against Florida and should have had four. Slade Bolden, a redshirt junior, had an uncharacteristic drop in the end zone as he was wide open.

RELATED: Urban Meyer says coaching in the NFL is like playing “Alabama every week”

As a first-year starter, Young enters his second home game with 10 touchdowns. He is tied for third in college football and is looking forward to a showdown against Matt Corral next week.

Crimson Tide fans have been pleased with the leadership, accuracy, and decision-making shown by the sophomore. The one area people want to see him improve is trusting his athletic abilities more. Young was classified as one of the elite dual-threat signal-callers from Mater Dei High School in California.

He wants to prove his greatness as a passer, but spectators don’t want him to neglect his running abilities.

Young recorded 1,084 rushing yards and 26 scores in his high school career. He had running lanes against Miami, Mercer, and Florida; nevertheless, he decided not to take them.

Paul Tyson and Jalen Milroe are Alabama’s backup quarterbacks, but the offensive coaching staff has not been able to get them game reps. The team has been cautious with Young because it does not want him to suffer an injury. He will grow in confidence with his athleticism, but Coach Saban has been pleased with how Young has handled himself in the pocket. During Wednesday’s SEC Coaches Teleconference, he provided an assessment of his quarterback.

“There was one occasion last week where he decided to take a shot and throw it where he might’ve been able to run for a first down,” Saban said of Young. “But I think overall, he’s done a really good job of handling himself in the pocket.”

The message has been about players around Young needing to perform well. Alabama looked strong against Miami but encountered issues with Mercer and the Gators. The Crimson Tide’s offensive line, running backs, and receiving options have to continue to assist Young in creating big plays. Also, Bill O’Brien’s play-calling must put Young in situations to have success.