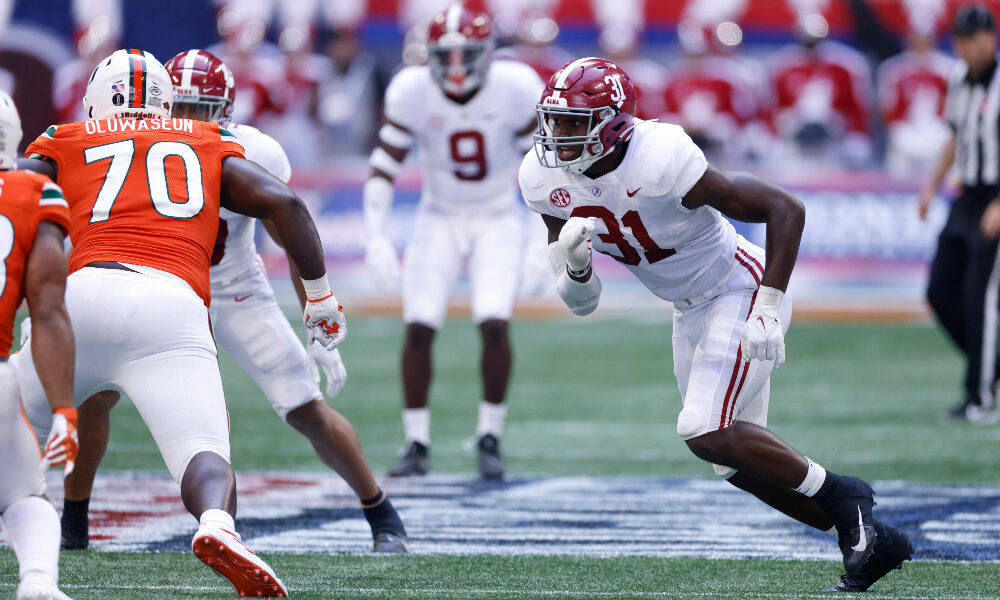 Ole Miss head coach Lane Kiffin knows what he’s going up against in Alabama all too well. Throughout the game week so far, Kiffin has praised the Crimson Tide for its pool of talent and head coach Nick Saban for his dominance in his career as well as this season.

But Kiffin zeroed in on one of Alabama’s most dominant defenders this season in linebacker Will Anderson, as he compared the sophomore to a pair of exceptional pass rushers in NFL great Derrick Thomas and current Cleveland Brown Myles Garrett.

“He’s a dominant player,” Kiffin said when asked of Anderson. “I said it this week: he looks like Derrick Thomas, which is amazing at his age. I mean, the guy’s a freak I guess from who we played over time, I mean, he’s not as tall as Myles Garrett but (he’s) as disruptive as that. They’ve got great players all over, but he’s the best of them.”

In terms of the two players Kiffin is referring Anderson to, it’s legendary status.

Thomas has the FBS record for sacks in a single season with 27 while he was a member of the Crimson Tide, and finished his career with 52 total sacks. He’d later go on to be drafted by the Kansas City Chiefs with the No. 4 overall pick in the 1989 NFL Draft. In his 11 seasons in the NFL, all with the Chiefs, Thomas accumulated 126.5 career sacks which is the franchise record.

Garrett was another standout SEC defensive end with Texas A&M who recorded 31 sacks of his own in three seasons with the Aggies. He’d eventually be selected with the N0. 1 overall pick in the 2017 NFL Draft by the Cleveland Browns. In his five seasons, Garrett totaled 48 career sacks, has been selected to two Pro Bowls and was named a First-Team All-Pro player last season.

In short, this is impressive company for Anderson to be in.

Whether he stacks up to either of them or not, Anderson has been a force in his own right so far in 2021. He is currently tied for second on the Crimson Tide in tackles with 24, second in sacks with 2.0 and leads the team in tackles for loss with 8.5 as well as quarterback hurries with two.

His play hasn’t only impressed Kiffin and other opposing coaches, but his own head coach Nick Saban who praised him for his warrior mentality as he’s played the last two games while dealing with a knee injury.

“I think he showed a warrior mentality playing in the (Florida) game, playing as well as he did when he wasn’t 100 percent,” Saban said back on Sept. 23. “… You have an opportunity when you’re not 100 percent to show that you’re a warrior, that you can go out there and play, be player of the week when you weren’t 100 percent and he wasn’t 100 percent. He did practice some but he didn’t practice like he always does and he got tired in the game and he persevered.

“He showed a warrior mentality that creates tremendous value, to me, for any player who can do that and he did it.”