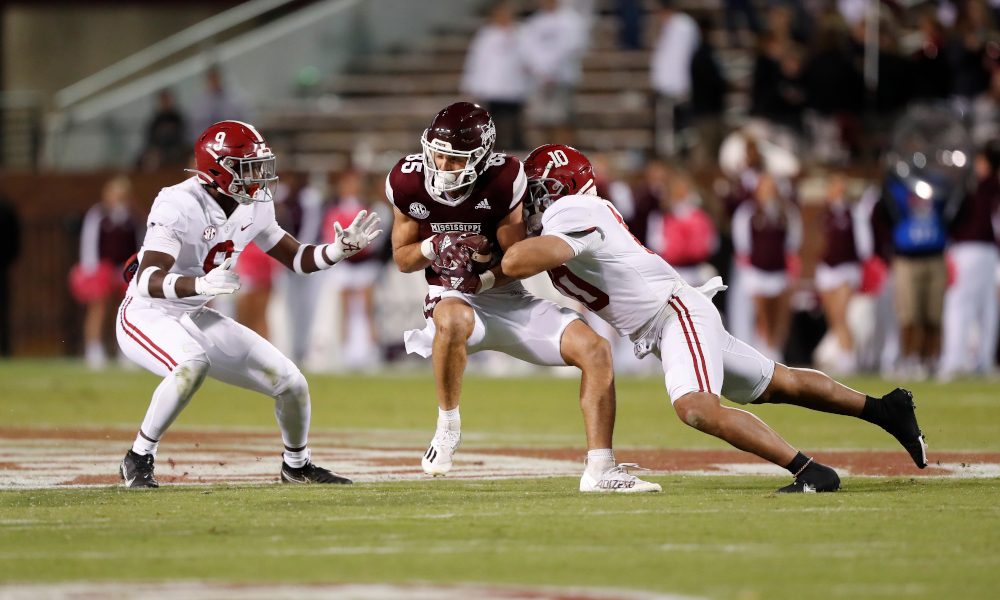 The rivalry between Alabama and Tennessee means a lot, but Nick Saban has owned the Volunteers since 2007.

Josh Heupel will bring the Vols to Bryant-Denny Stadium with a 4-3 record in his first season.

It has been 14 years since Irvin Carney, a graduate of the University of Alabama, gave the viral “I Hate Tennessee” interview.

While the matchup will happen under the LED lights, two student-athletes take center stage on opposite sides of the rivalry. Henry To’oto’o, a linebacker, was between Alabama and Tennessee in the 2019 recruiting cycle.

He chose the Volunteers and spent his first two seasons in Knoxville, Tenn. After building relationships there, he entered the transfer portal and was allowed to come to the Tide.

RELATED: Did Alabama’s defense have a spark versus MSU or has it turned a corner?

Oct 12, 2019; Knoxville, TN, USA; Tennessee Volunteers linebacker Henry To’o To’o (11) gestures to the crowd while leaving the field due to a targeting call against the Mississippi State Bulldogs during the second half at Neyland Stadium. Tennessee won 20 to 10. Mandatory Credit: Randy Sartin-USA TODAY Sports

He appreciated his time in Knoxville, but Saturday will be emotional for him.

During his time there, To’oto’o recorded 148 total tackles, 15 tackles for loss, 1.5 sacks, four pass breakups, five quarterback hurries, and one interception. He leads Alabama for tackles (54) in his first season and has three tackles for loss, one sack, one pass breakup, and one quarterback hurry. In player interviews, no one has been joking with To’oto’o about the matchup.

Brandon Turnage, a defensive back, signed to the Crimson Tide in 2019. A native of Oxford, Miss., he came in the same class with Jordan Battle, DeMarcco Hellams, and Marcus Banks.

Turnage was a core special teams player, but he was on Alabama’s national championship team in 2020. He entered the NCAA transfer portal on May 6 and committed to the Georgia Bulldogs.

Turnage would later come off that commitment and chose Tennessee. He is having success with the Volunteers, especially after winning SEC Defensive Player of the Week a few weeks ago. Turnage has 16 tackles, including two tackles for loss.

RELATED: Trey Sanders is making good progress and gaining confidence at running back

“BT is like a brother to us,” Moore said. “He will always be family no matter where he’s at. We FaceTime him every day, and seeing him with his daughter, we are excited for him and what he’s doing over there.”

Battle, a junior, called Turnage one of his best friends.

“BT and I speak every day,” Battle said. “We have a long relationship. I am very happy for him and proud of him, especially getting SEC Defensive Player of the Week. I am hoping he continues to have success. That is my guy.”

When it comes to conversations about the game, Battle said he and Turnage ‘stay away from football.’

Alabama’s defense will lean on To’oto’o to stop Tennessee’s offense. Many of his friends are on the team, so he knows how the Volunteers operate. Tennessee will look to Turnage to see what can offset Bryce Young and the Alabama offense. He competed against John Metchie, Slade Bolden, Traeshon Holden, Jahleel Billingsley, Cameron Latu, and others in practice last year.

Bryant-Denny Stadium will be rocking, and To’oto’o and Turnage are ready.