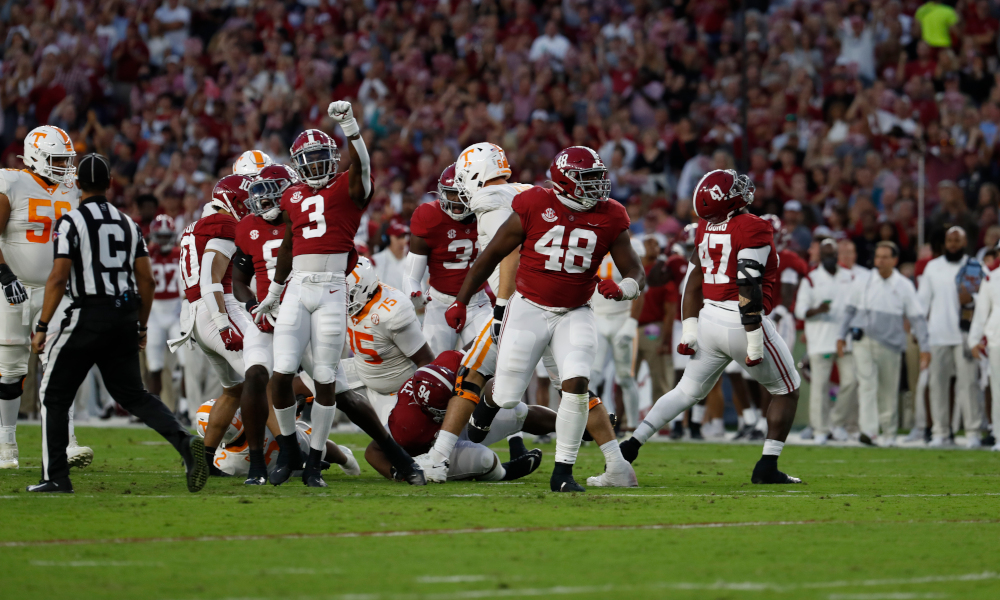 Alabama made plays on defense against Tennessee, but it still needs improvement.

Henry To’oto’o and Christian Harris performed well as inside linebackers.

RELATED: Brian Robinson has turned into a premium feature running back for the Tide

Both players combined for 11 tackles and limited the Volunteers to 2.6 yards per rush attempt. To’oto’o and Harris assisted a defensive front that allowed 64 yards rushing and two conversions on third down. The Crimson Tide’s front had three sacks and five tackles for loss. Despite surrendering 14 points in the first quarter, Alabama held the Vols to 10 points in the second half.

Tide fans have identified the secondary as an area that needs improvement.

Malachi Moore has some big tackles and Jalyn Armour-Davis recorded an interception, but there are a lot of issues on the back end.

Alabama worked in Daniel Wright and DeMarcco Hellams at free safety. Tennessee got huge plays against them — including touchdown passes of eight yards (Velus Jones Jr.) and 57 yards (JaVonta Payton) from Hendon Hooker. Josh Jobe was misaligned on one play, and it allowed Charles Tillman to run by him for a 70-yard touchdown catch from Hooker.

Miscommunication in the secondary led to Tennessee’s 24 points against Alabama.

Whenever Hellams or Wright was on the field, that was the matchup Tennessee attacked.

During its bye week, Alabama has to get this fixed. The Tide could go to Brian Branch or play true freshmen, but a spark needs to happen in the secondary. Hellams and Wright have talent, but both are inconsistent in coverage.

Alabama fans have been wondering about Ga’Quincy “Kool-Aid” McKinstry and Terrion Arnold. Both are phenomenal athletes that have not gotten enough opportunities in games.

The recent signing class was thought to be the best for Coach Nick Saban; nevertheless, these athletes are not playing. Hopefully, the Tide uses its off week to get its secondary right before facing LSU.