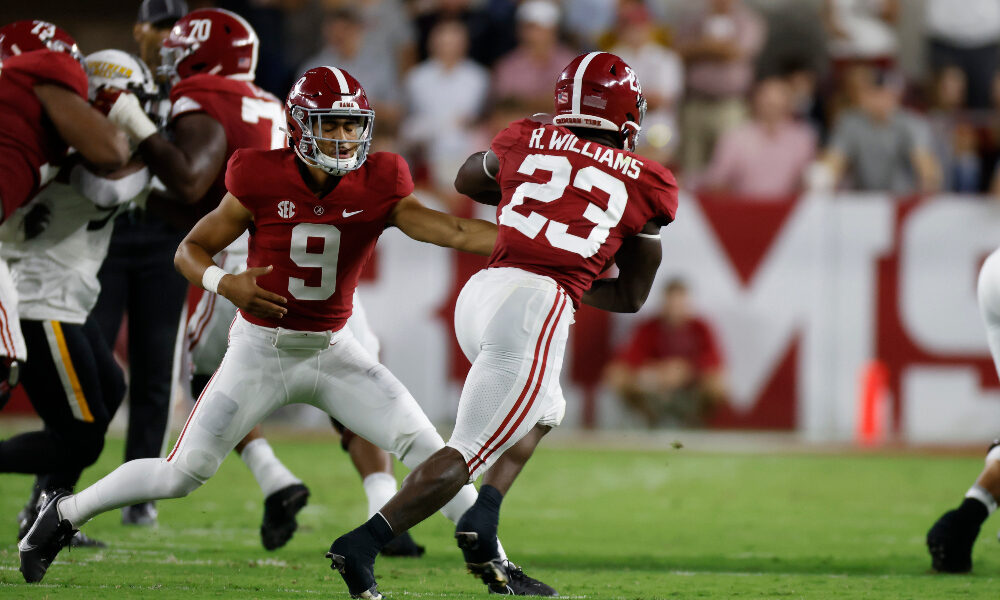 Alabama took another major hit in its running backs room, on Monday as head coach Nick Saban shared that Roydell Williams will need to undergo knee surgery and will be out for several weeks.

The specifics of the injury were not shared during the press conference.

Saban also shared an update on wide receiver JoJo Earle in his opening statement, stating that the true freshman will also be missing time but won’t need to have surgery.

“Roydell Williams is going to be out, he needs knee surgery,” Saban said. “JoJo Earle does not need surgery but will be out for a little bit of time, as well. Those guys are probably not gonna be able to play — Rodyell for a while, JoJo maybe a week or two.”

Both Williams and Earle left last Saturday’s game against New Mexico State where both players had to be carted to the locker room.

Alabama is equipped to replace Earle’s production, but Williams is now the third running back on the roster who will be missing significant time as he joins Jase McClellan and Camar Wheaton on the injured list. Because of the lack of depth, Saban converted wide receiver Christian Leary and linebacker Demouy Kennedy to emergency running backs on the roster but will now likely be forced to search for more.

“I don’t think you can change a lot,” Saban said. “We’ve worked a couple other guys there for over a month now. Those guys are functional at the position. We’ll probably look for somebody else on our team that maybe we could develop into being a functional player from an emergency standpoint if we need them. But I don’t really think that we can change right now. We certainly have to have a plan if we have any more issues at that position.”

Part of the plan right now for Alabama is to get redshirt sophomore running back Trey Sanders more involved in the offense. Sanders led the team in carries against the Aggies with 12 going for 66 yards and a touchdown last Saturday.

“I think he’s got a great opportunity,” Saban said when asked about Sanders. “I thought he played well in the game. It was good to get him some touches in the game. I think he understands the offense well, and I think he’s a very capable guy. Now that he’s gonna have a more significant role, it’s time for him to take advantage of that opportunity, as well. But we have every confidence that he can do that very well for us.”