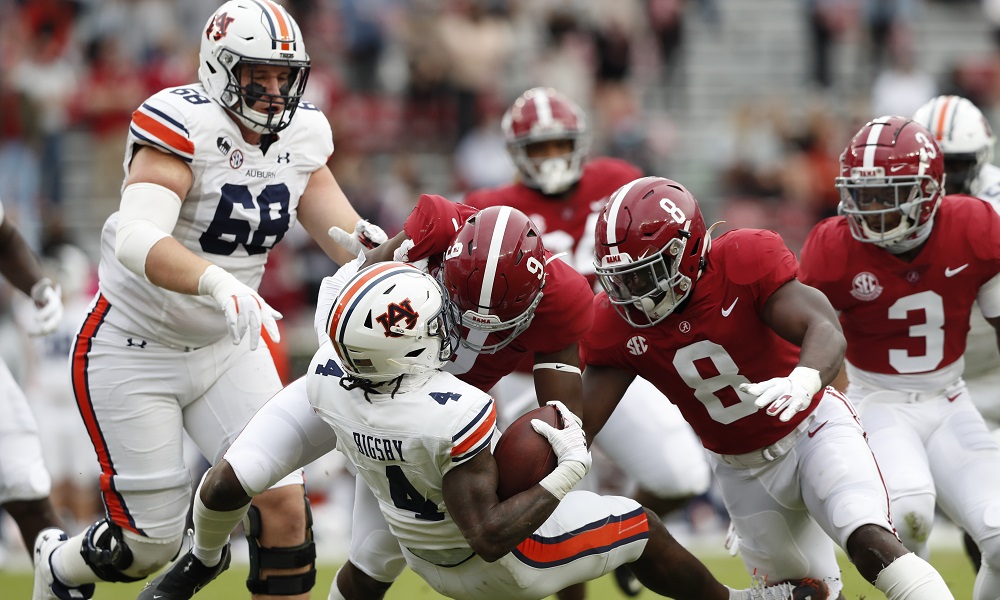 He has won six national championships since becoming Alabama’s head coach in 2007.

When it comes to football, fans believe nothing is superior to Nick Saban.

The 70-year-old has proven them right as he is one of the greatest coaches of his generation.

He has a team that does not fit the standard of recent ones, but the Crimson Tide has an opportunity to capture a Southeastern Conference Championship and go to the College Football Playoff. Saban has overcome hurdles, but he faces on Saturday that has bested him four times since ’07.

Jordan-Hare Stadium is the venue for the Iron Bowl. Alabama is 3-4 at the site under Saban, including two straight losses in 2017 and 2019.

Kerryon Johnson had a field day against Alabama’s defense in 2017, and a missed field goal doomed the Tide two years later. The defeat in 2019 cost the Tide a chance at the playoff for the first time since its inauguration in 2014. During the summer, Tony Fair (a transfer defensive lineman) shared a video to Twitter with the caption: “We comin’ to take the head off the elephant.”

We comin to take the head off the ELEPHANT 🐘 🩸🗡 #WDE 🦅 #NATI Season‼️‼️🏆 pic.twitter.com/WLRQo12RAm

Auburn had aspirations for a national title, but it has returned to the game to salvage its season.

Tigers’ quarterback Bo Nix told reporters at SEC Media Days that the goal is taking the head off the elephant. A broken ankle will keep Nix from playing, but he wants to see his team victorious. The atmosphere will be electric as always at Jordan-Hare.

RELATED: Will Anderson, Bryce Young, and other individual performances may be Alabama’s key to winning back-to-back titles

Alabama’s offense struggled in 2017 during the first half.

Auburn took a 10-7 lead into halftime and won 26-14. The Tigers hung around in the first half of 2019, trailing 31-27 at halftime. Auburn responded in the second half by outscoring the Tide, 21-14, to earn a 48-45 victory. First-year head coaches in the Iron Bowl for Auburn against Saban have fared well. Gene Chizik lost in 2009 (26-21, Alabama); however, he gave the Tide all it could handle. Gus Malzahn had a “Kick 6” win his first Iron Bowl as Auburn’s head coach in 2013. Bryan Harsin has the Tigers at 6-5, but he will have options prepared to attack Alabama. Tiger fans have been a little hot at Harsin, but a victory over the Crimson Tide will calm things down. Auburn is the third common opponent Alabama and Georgia have on their schedules.

The Bulldogs handled the Tigers, 34-10, inside Jordan-Hare Stadium.

Alabama did not have dominant wins over Florida and Arkansas. It needs a statement victory versus Auburn.