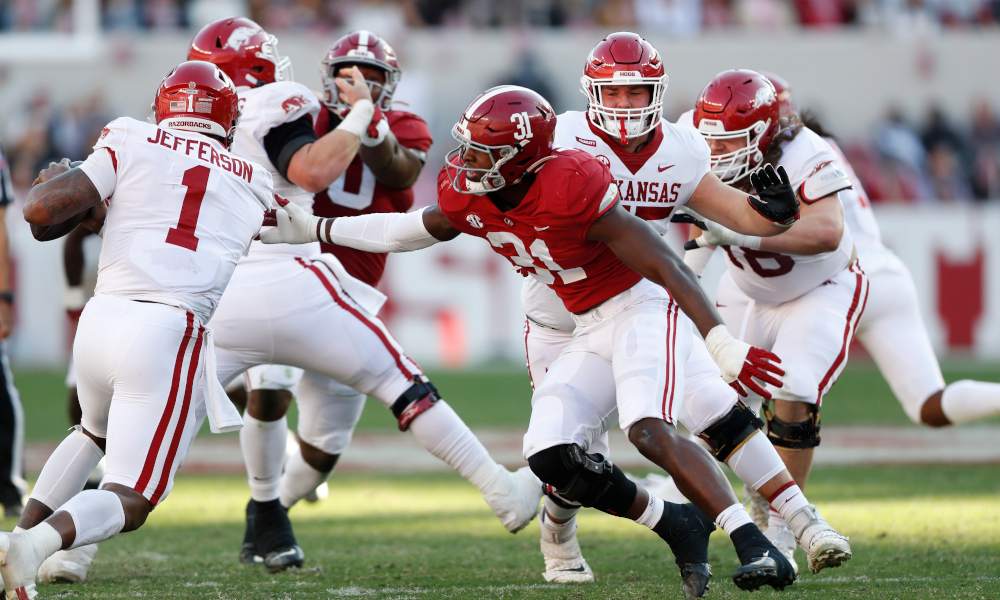 Balance on offense and defense was the key for Alabama in five of its six national championships under Nick Saban.

Last year, the offense carried the team as it totaled 40+ points in 11 of 13 games to win a national title.

As much as Crimson Tide fans want balance, Alabama has not won off this method.

Big individual outings have been the winning ingredient. In close victories over Florida, LSU, and Arkansas, Bryce Young was sensational distributing passes at quarterback.

He kept the Tide composed in “The Swamp” and totaled 300+ passing yards versus LSU and Arkansas. His three touchdown passes lifted Alabama over the Gators while Young’s record-setting Heisman-worthy outing versus Arkansas beat KJ Jefferson.

The sophomore has had six games where he tossed for 300+ yards and 3+ touchdowns.

RELATED: More personnel changes may be in order for Nick Saban and Alabama to repeat as national champions

Jameson Williams and John Metchie have emerged as Alabama’s duo at wide receiver.

Both had 100-yard receiving performances together against Tennessee and Arkansas.

Williams has six 100-yard games, while Metchie has three. When the two are consistently catching passes from Young, the Tide is unstoppable on offense. Williams has accomplished a 1,000-yard campaign (1,218) while Metchie (895) is 105 yards from his first 1,000-yard season. Marquee outings from these two equal a national title for the Tide.

Brian Robinson is nearing his first 1,000-yard rushing season (945) and has 14 touchdowns.

Alabama needs him for back-to-back titles; however, his success depends on the dominance of its offensive line. Despite him having four 100-yard games, the Tide has not been consistent upfront in run blocking.

Robinson might have to do more in the receiving game.

Hopefully, the offensive line can make a statement in the Iron Bowl. Defensively, Alabama has been up and down all year.

Will Anderson serves as the one constant.

Without him, the Crimson Tide is worse on defense across the board. The sophomore forces offensive coaches to game plan for him, yet they cannot stop him. Anderson leads the group in tackles for loss (26.5), sacks (13.5), and quarterback hurries (eight). The 6-foot-4, 243-pounder also has two pass breakups and 78 total tackles.

He leads the team for solo tackles (43) and averages one sack per game. Anderson has to continue playing big for a national championship opportunity.

He has 5.5 sacks, 7.5 tackles for loss, six quarterback hurries, one forced fumble, and 41 total tackles. The fifth-year senior has increased his NFL Draft value for 2022. Alabama needs for him to keep being disruptive.

Alabama will have to lean on its leaders more, so it will be interesting to see if they can sustain the level of excellent play.