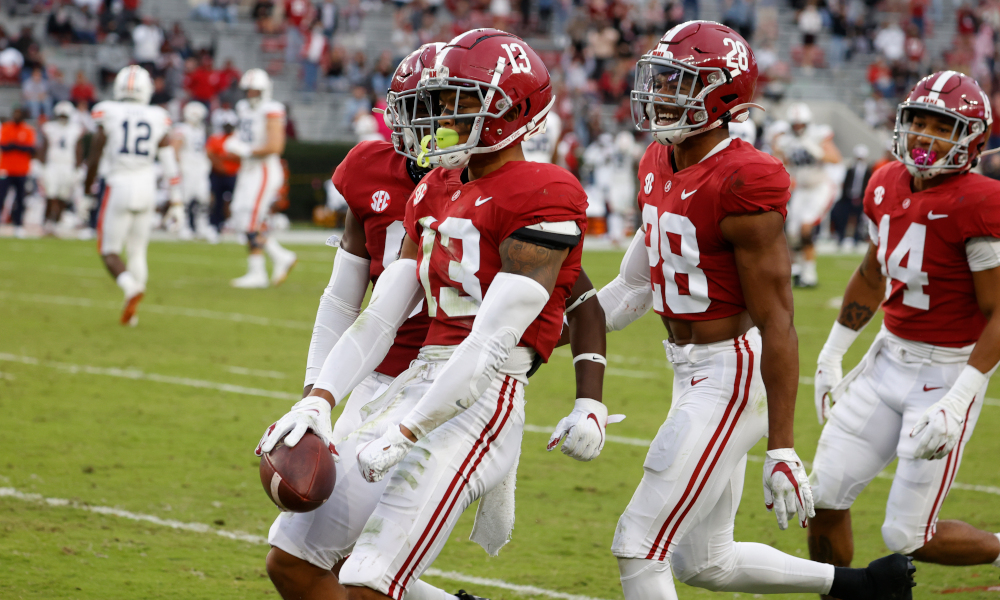 Alabama football has a date with the University of Georgia in the Southeastern Conference Championship Game, but it has some business to care of before the matchup.

Coach Nick Saban is determined to show Jordan-Hare Stadium it does not have a vise grip on him.

Bryan Harsin and the Tigers look to spoil Alabama’s dreams of the College Football Playoff. Auburn eyes an upset of its in-state rival, but there are three ways the Tide can avoid a let down on the road. All three highlights are below for the upcoming game.

If it wins the coin toss, Alabama needs to take the ball.

Auburn will have a sell-out crowd at Jordan-Hare, and the venue will be rocking. The Crimson Tide has to eliminate the noise early.

Alabama’s offensive line must dominate the line of scrimmage. Bryce Young can have a monster performance against the Tigers’ defensive secondary, and its running backs could have a field day, but it starts up front with excellence.

The offensive cannot allow several hits (sacks) on Young or struggle to create opportunities for the ground game.

Receivers have to make consistent catches, and Bill O’Brien’s play-calling needs to provide players with confidence. Offensively, the Tide has to finish every possession with a score.

It has to make the Tigers play catch up as well as be efficient on its drives.

2. Auburn’s T.J. Finley & Tank Bigsby have to be limited in production

Alabama got in trouble with Auburn in the past when it failed to limit the production of the Tigers’ marquee players.

An ankle injury will prevent Bo Nix from playing, but T.J. Finley will start at quarterback. The 6-foot-7, 246-pounder has a skill set similar to KJ Jefferson of Arkansas. Jefferson torched the Tide’s secondary for 326 passing yards and three touchdowns, despite a 35-42 loss.

Finley possesses a big-time arm, but he can also create with his legs. He does not have the scrambling ability of Nix; however, Finley does enough athletically to make defenses account for him. On Monday, Alabama linebacker Will Anderson spoke on the importance of not letting Finley run. Pete Golding has to mix pressures and disguise coverages to generate negative plays.

If the Tide can force some turnovers, it would be good for them.

Tank Bigsby, a sophomore, is one of the best running backs in the SEC.

Christian Harris and Henry To’oto’o have to take on blocks, locate Bigsby, and make consistent tackles. The defensive line also needs to win at the line of scrimmage to prevent Bigsby from building momentum. He can be difficult to tackle because he gets stronger as the game goes.

The Tigers get him 16 carries per matchup.

He averages 5.3 yards per rush attempt and 85.5 yards per game. Bigsby has five 100-yard performances and totals 940 yards rushing with ten touchdowns.

If the Tide handles the talented runner, it takes Auburn out of their element.

3. No mental mistakes defensively for the Crimson Tide

During its victories over Alabama at Jordan-Hare Stadium, the Crimson Tide suffered numerous errors that helped the Tigers.

Whether it’s penalties, lack of communication, lack of execution, poor play-calling, or lack of effort, the Tide helped Auburn at times on defense. A buttoned-up mentality is imperative for Alabama. It cannot have several moments where it commits mistakes that could result in a loss. The mission for the Tide should be to make quick work of Auburn.

A mistake-free performance guarantees a calm fan base for the Crimson Tide.