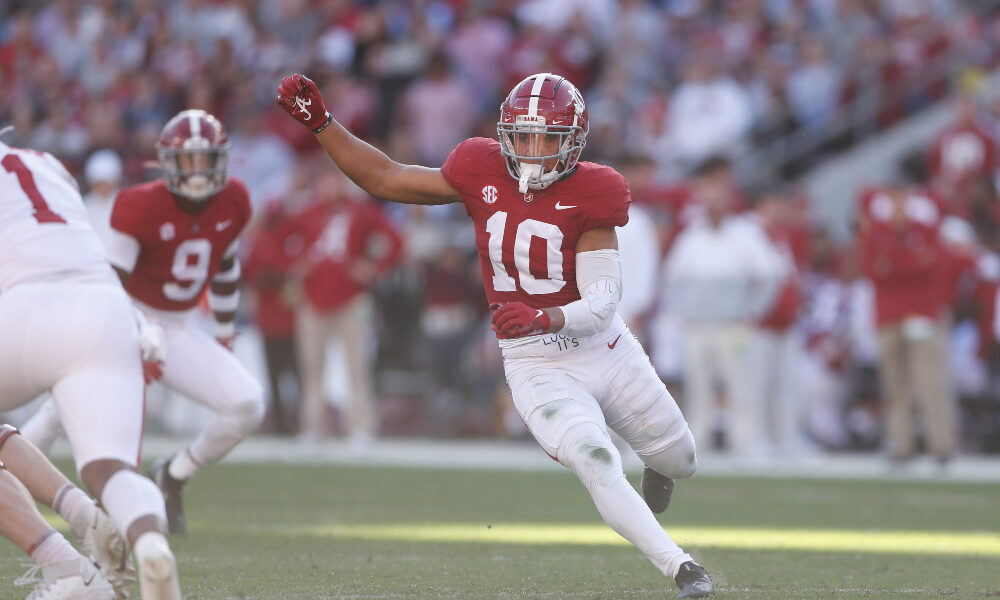 Henry To’oto’o came to the University of Alabama from the transfer portal under expectations.

Alabama lacked elite performances at middle linebacker in 2019 and 2020, so fans looked to To’oto’o as the answer for the Crimson Tide.

He arrived in the summer with two years of experience from Tennessee. The 6-foot-2, 228-pounder gained praise from defensive coordinator Pete Golding and earned a starting job. He has endured good and bad moments, but the California native has become an impact player for Alabama.

To’oto’o got stronger throughout the season and has himself in a position to win a national title.

He leads the defense for total tackles (102) and has 8.5 tackles for loss, four sacks, one pass breakup, two quarterback hurries, and one forced fumble.

Golding continued his praise for To’oto’o in Monday’s presser.

“He soaked it all up,” Golding said in what impressed him about To’oto’o when he came. “He did not come in trying to tell folks what to do. He came in, was aware of his surroundings, worked his butt off, and tried to work harder than everybody else. He tried to learn our defense, our players, how we do it here, and the expectations. Once he got the grasp of it, then he decided to lead.”

To’oto’o and Will Anderson have different leadership styles.

One shows the way by example while the other is more vocal. Both have helped the Tide improve.

Golding said it is To’oto’o’s practice habits, preparation, and leadership that gravitates teammates to him. His mentality brings others with him, and players mimic it. He’s had some rough moments, but To’oto’o is better for them as a player.

He is ready to make Desmond Ridder and Cincinnati’s offense a non-factor in Friday’s College Football Playoff Semifinal matchup in the Goodyear Cotton Bowl. To’oto’o is the sixth linebacker of the Nick Saban era at Alabama to total 100+ tackles since 2009.