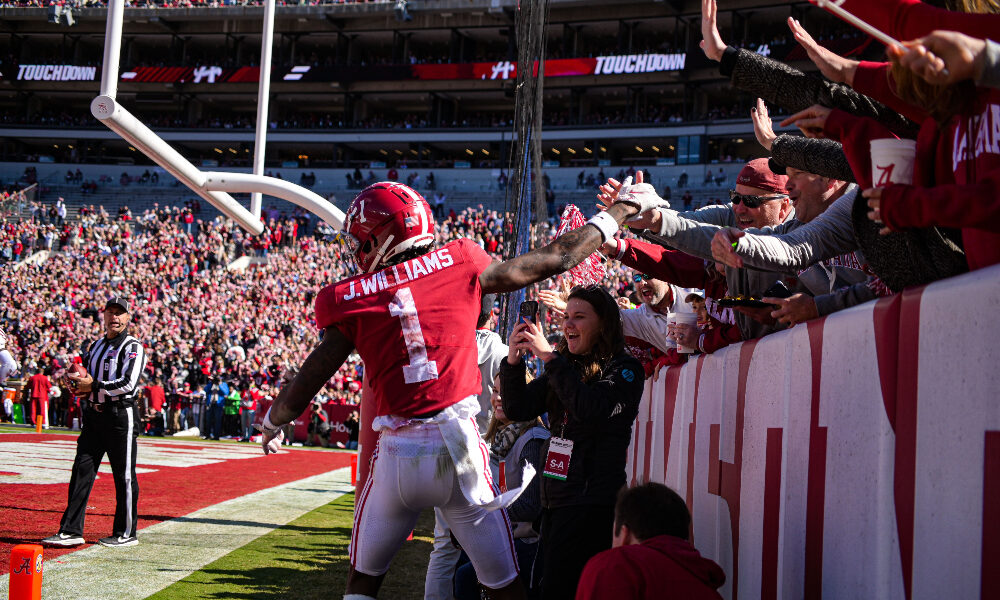 Jameson Williams transformed himself from the No. 3 wide receiver at Ohio State to the best playmaker for Alabama in one season.

When he arrived in the summer, Williams created attention.

A native of St. Louis, Mo., he collected a touchdown pass from Justin Fields in the College Football Playoff semifinal between Ohio State and Clemson. He caught 15 passes for 266 receiving yards and three touchdowns in two years. Williams entered the NCAA transfer portal and chose the Crimson Tide as his destination. After losing Jaylen Waddle and DeVonta Smith to the National Football League, Alabama gained an explosive weapon in Williams. Nick Saban discussed the ‘juice’ he adds to the team at SEC Media Days and paid him a big compliment during the season. The 6-foot-2, 189-pounder has become a favorite for Tide fans, players, and the coaching staff.

He and John Metchie created the “Crane Kick” touchdown celebration that went viral on social media. Williams has turned in a stellar year with 68 receptions for 1,445 yards (team-high) and 15 scores (team-high).

He has seven 100-yard performances, including five versus Southeastern Conference schools. Williams dominated the best defense in college football — catching seven passes for 184 yards and two touchdowns against Georgia. He shredded the Bulldogs’ defensive secondary in the SEC Championship Game.

He projects as a first-round selection for the 2022 NFL Draft, but his focus is on winning a national championship. It was a journey for him, but Williams said coming to Alabama was ‘the best predicament he could have been in.’

“Once I made the change to come to Alabama, things just worked out well for me,” Williams said Thursday.

RELATED: Seth McLaughlin ‘answered the bell’ versus Georgia and looks to roll in College Football Playoff

Motivation marked Williams’ path to Tuscaloosa, Ala. He offered advice for future transfers that consider the Tide.

“I would say get comfortable and go to work,” Williams said in advising transfers that want to come to Alabama. “That would be the main two things.”

Alabama has produced legends at wide receiver, but Williams’ numbers in one year put him in the category.

Williams is excited to play an elite secondary on New Year’s Eve. Cincinnati will try to lock up Alabama’s potent weapon in the Goodyear Cotton Bowl at AT&T Stadium in Arlington, Texas. Williams is ready to continue his success in the CFP.