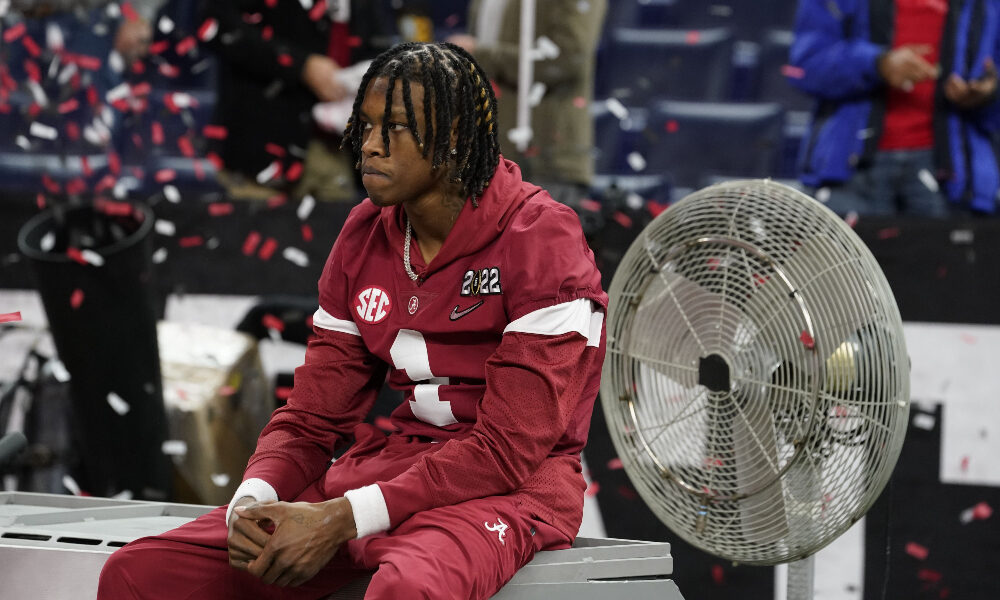 The common saying for any athlete playing what possibly is their final game at the college level is to leave it all on the field. Alabama wide receiver Jameson Williams wanted to do just that during the national championship game against Georgia on Monday but his night was cut short.

During the second quarter, Williams caught a 40-yard reception from quarterback Bryce Young but suffered a lower-body injury on a non-contact play and was helped off to the medical tent by the training staff. Williams eventually made his way to the locker room and did not return to the game in the second half.

Following the game, head coach Nick Saban shared that Williams was looking to get back into the game despite suffering a knee injury. Saban and the training staff ultimately held him out due to his future prospects.

“He has a knee injury,” Saban said. “We won’t know the extent of the knee injury until we get an MRI. He actually wanted to play in the second half and the medical staff wouldn’t let him, which I think was smart because he has a future as a football player. Look, this guy contributed tremendously to our team all year. He has great speed. He’s a vertical threat. I think our offensive coaches did a great job of utilizing his talent this year. He’s been very productive. Anytime you lose players like this it has an impact on your team.

“Yeah, it gives other players opportunities. And I’m not disappointed in how they responded to that, but there’s no question that you win with great players. You win with great people. And he’s been a great person and a great player on our team all year long. So when you take him out of the lineup, it has to have some impact.”

Instead of returning to the game, Williams’ night ended with four catches for 65-yards.

Georgia head coach Kirby Smart also shared his concerns for Williams following the game, asking Saban how he was doing and it can be heard that Saban said that as of right now the team thinks it could be an ACL injury.

The respect and admiration between two of the best in the game 👏 pic.twitter.com/jlIHvnBJyq

“Losing someone like J-Mo is tough,” Young said to the media following the game. “But that’s been a theme for us is overcoming adversity. A lot of guys stepped up in a big moment, and those guys that we were used to. And I’m tremendously proud of how we played offensively, how people stepped up. I’m tremendously proud of how everyone around me played. And it’s on me to perform better. People stepped up in big moments when they were supposed to. And we had chances, had opportunities. And at the end of the day I didn’t get the ball into the end zone. And that’s on me.

“I love my guys. I’ll forever love my guys. I wouldn’t trade my guys for anything. And I’m – it’s a little tough that I let them down today. But I love those guys and they stepped up. Adversity has been our thing all year. I’ve just gotta do better with it.”

Stepping up to fill the role of Williams was a tandem of young receivers which included Traeshon Holden, Agiye Hall and Ja’Corey Brooks. Coming into the game Holden had the most appearences of the three as he saw action in 13 games in 2021 with Brooks adding 10 games of experience and Hall with just four games.

“It’s tough for any of our teammates to go out and go down,” junior receiver Slade Bolden said following the game. “Losing J-Mo, he’s such a big part of our offense, and he’s such a great player and teammate it was hard. But that’s what we train for. That’s what we do. Practice hard. Everybody’s prepared to step up because you never know when you’re going to get your next shot. So I feel like everybody did a good enough job. And we just couldn’t make the plays and we couldn’t finish tonight. And that’s the story of it.”

In the final two quarters of play, Young threw for 163 yards with one touchdown and two interceptions with his first coming on the team’s first drive of the third quarter and the next with 54 seconds remaining in the game which was returned for a touchdown by Keelee Ringo. It was the first game in Young’s career to throw multiple interceptions in the same game.

Alabama’s offensive production, in general, took a major hit from the second quarter to the second half. Offensively the Crimson Tide averaged 9.1 yards per play in the second period against the Bulldogs, but over the next two quarters without Williams, the team averaged 4.2 yards in the third and just 3.4 yards in the fourth.

“J-Mo was a great player for us all year,” Saban said. “He made a lot of explosive plays. And I think anytime you lose players like him and John Metchie it certainly has some impact on how you can perform offensively. And Bryce is a great quarterback. He had a great year. But at the same time, when you play quarterback, players have to play well around you, and we had some guys step up tonight and get some opportunities and they did some good things.”