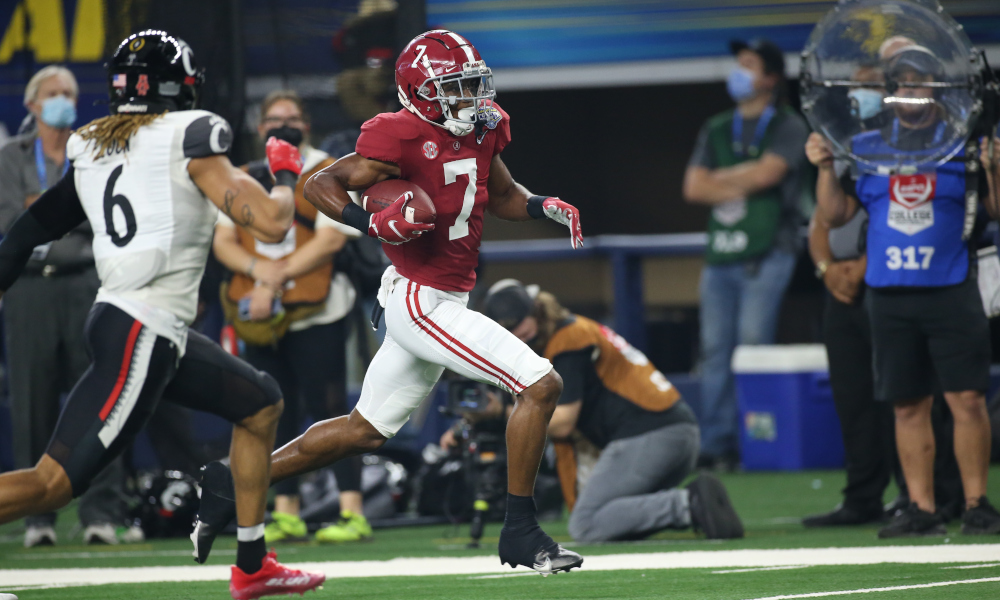 John Metchie is excited to hear his name called early in April, but he hails from a program that garners the title “Wide Receiver University.”

Metchie did not enter Alabama football under much hype in 2019, but he worked hard and recorded his first 1,000-yard season in 2021. He led the Crimson Tide in receptions (96) and totaled 1,142 yards with eight touchdowns. Other names such as Amari Cooper and DeVonta Smith did not arrive with a ton of fanfare, but both became the greatest at the position.

Reporters at the NFL Scouting Combine want to know who is next in line as the next great receiver out of Tuscaloosa. Metchie likes all the talent, but he singled out one name.

“All the guys are young. I think C7 — Ja’Corey Brooks — will be good,” Metchie said today in Combine interviews. “But the receiver room is just as full as ever.”

Metchie sees Brooks as a superstar on the rise. As a freshman, Brooks impressed coaches and teammates with his work habits.

He practiced well, took opportunities seriously, and stepped up during critical moments. Brooks caught 15 passes in 2021, and all of them came in the last six games of the season. He quieted a boisterous crowd at Jordan-Hare Stadium with a 28-yard, game-tying touchdown reception versus Auburn late in the fourth quarter.

RELATED: Alabama has the strength coach to take over in Matt Rhea’s departure

The Tigers had control of the Iron Bowl until Brooks allowed the Tide to tie the score at 10. Alabama went on to secure a 24-22 victory in four overtimes. Brooks led all receivers with 66 yards on four catches against Cincinnati in the Cotton Bowl.

He caught a 44-yard touchdown from Bryce Young. The 6-foot-2, 190-pounder tallied a team-high nine targets in the College Football Playoff National Championship Game against Georgia. He brought in six passes for 47 yards.

Brooks finished his campaign with 192 yards and two scores. Young, Nick Saban, coaches, and players, trust him with the football. He did not get the attention on the recruiting trail that Agiye Hall, Christian Leary, and JoJo Earle received, but that did not bother the South Florida native.

Spring practice will be fun to watch in studying Brooks’ growth as a sophomore.

He can be Alabama’s next elite player at wide receiver.