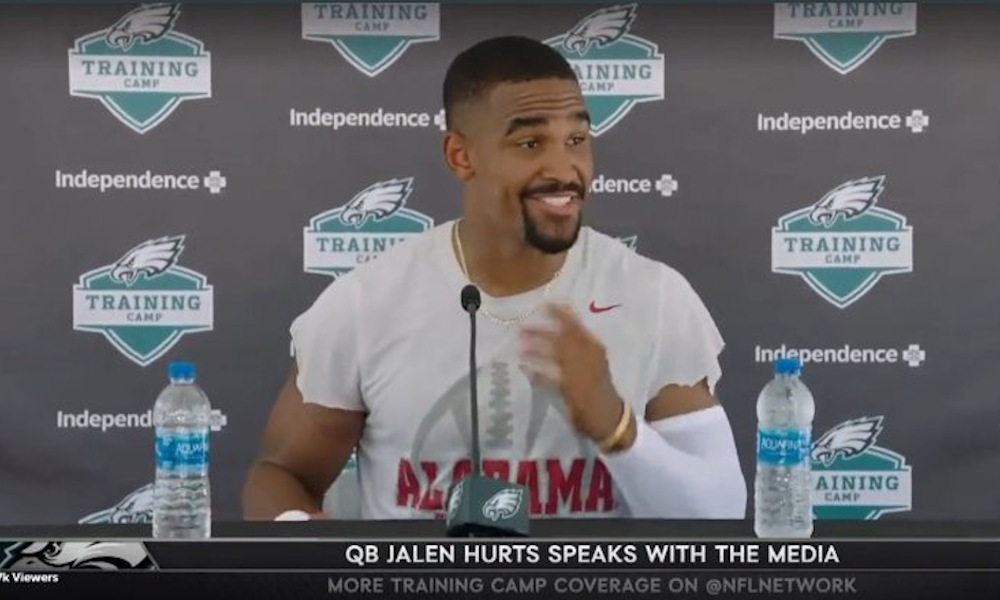 Jalen Hurts enters his third season as a quarterback in the National Football League for the Philadelphia Eagles.

He led the franchise to the playoffs in his sophomore year and grew as a passer. Hurts is running the same offense, so he feels confident and comfortable in the system. As a former signal-caller for Alabama and Oklahoma, expectations are high for Hurts to propel the Eagless on a deep playoff run. He has a chance to play himself into a massive contract for the 2023 offseason, but he must perform well in the fall. The native Texan has the support of the franchise, including his teammates in Philadelphia.

RELATED: Is the SEC bringing in more competition to challenge Alabama football?

He has DeVonta Smith and A.J. Brown to grow with, but the Eagles’ offensive line is very confident in Hurts.

Lane Johnson and Jason Kelce are two first-team All-Pro linemen. Johnson made first-team All-Pro in 2017 while Kelce is a four-time All-Pro center (2017-19, 2021). Both see Hurts as a quarterback they ‘will go to war with’ on Sundays.

Reliving “Philly Philly” 🏆
Expectations for Jalen Hurts 🤔
Getting ready for the 2022 season 👀@MJAcostaTV covered a lot with @Eagles RT @LaneJohnson65 (via @NFLTotalAccess) pic.twitter.com/H89EqUhnuM

“He carries himself with a lot of poise,” Johnson said about Hurts on NFL Network. “He demands respect. It’s the way he goes about daily activities, training, the film room, and he’s a great motivator. He’s a great leader. He has connected with more players this offseason, especially the wide receivers. He’s excited about the new guys we acquired and drafted. He’s ready to get to work.”

Johnson and Kelce were on the Eagles’ 2017 Super Bowl Championship team. Nick Foles led Philadelphia through the playoffs and to the Super Bowl, but both have confidence in Hurts as the man. Kelce told ESPN’s Dianna Russini that Hurts ‘made a lot of progress throughout last season.’ Kelce said Hurts enabled the offense to win a lot of games in 2021 to make the playoffs.

“He’s been working his tail off and is ready to show everybody what he’s got,” Kelce said about Hurts. “So, I can be very optimistic. I’ll go to war with that guy any day of the week.”

Philadelphia has the offensive personnel to be a threat in the NFC, but it needs Hurts to put it all together.

He eyes the chance to make a marquee impact and take a huge leap in the fall.