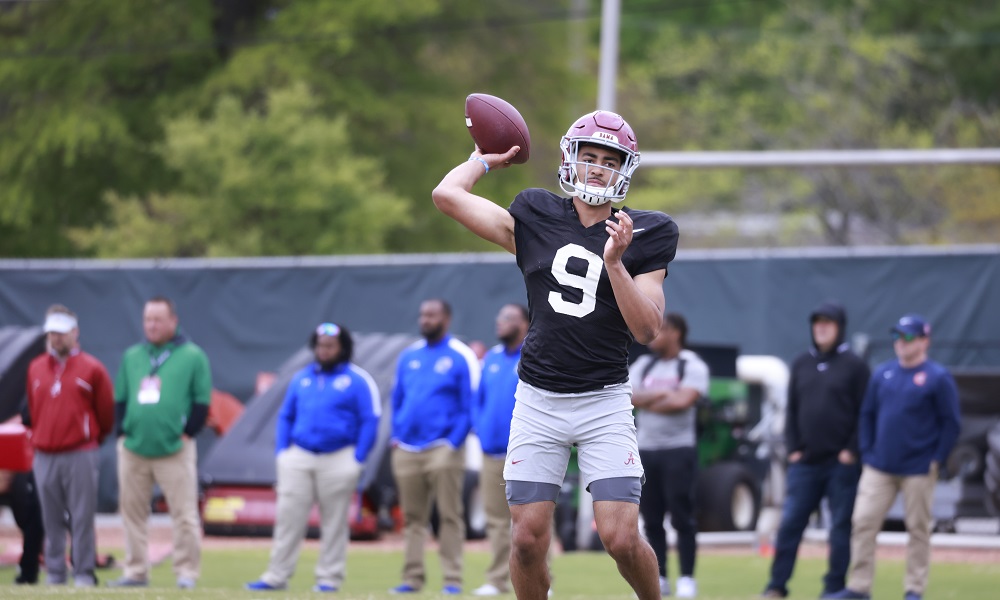 The most recent elite quarterback room Alabama had was in 2017 and 2018.

Jalen Hurts was the starter in 2017, but Tua Tagovailoa and Mac Jones were two talented freshmen.

Tagovailoa played 11 games, and when the Crimson Tide needed him in the second half of the 2018 College Football Playoff National Championship Game, he delivered a comeback victory over Georgia in overtime. Tagovailoa became the starter in 2018, but Hurts was instrumental as a backup. Tagovailoa sustained an injury in the second half of the Southeastern Conference title game versus the Bulldogs, and Hurts came off the bench to propel the team to a 35-28 comeback win. Jones would become a big help to Tagovailoa in 2019 as he replaced the injured quarterback in matchups versus Arkansas, Auburn, and Michigan.

All three signal-callers pushed the Tide to national championships.

Alabama fans are excited about this quarterback room as it carries similarities to 2017. Bryce Young returns as the reigning Heisman Trophy winner and starter. He set single-season school records for passing yards (4,872), passing touchdowns (47), and total touchdowns (50). He finished his sophomore year with many individual awards, but Young wants a national title.

Jalen Milroe (sophomore) and Ty Simpson (freshman) are behind him.

Milroe, a native Texan, has qualities similar to Hurts, but he has the potential to be a better passer.

Simpson, a native of Martin, Tenn., brings athleticism, mobility, and a talented arm. Tide fans feel confident that if something happened to Young (injury-wise), Milroe or Simpson could step in and captain the ship. No one wants anything happening to Young, but fans are confident in the quarterback room. Coach Nick Saban discussed how pleased he is with the group in Thursday’s presser after the first fall camp practice.

“Bryce has done a good job from a leadership standpoint as well as understanding the offense, and he has a lot of confidence in what he’s doing,” Saban said.

“He’s making good decisions, and I think he sets a good example for the other guys. I think Jalen Milroe has made a significant amount of progress. We still want to continue to work with him, and we are developing Ty as a young player. He is in the developmental stage, but we are pleased with his progress. I think everyone has a good attitude and a good mindset.”

The question directed to Saban was about cornerbacks, but he thought the reporter was talking about quarterbacks.

Anyway, Saban is happy with who he has as signal-callers. Milroe tossed a touchdown pass for Alabama in 2021 versus Southern Mississippi at Bryant-Denny Stadium. He is very athletic, and Tide fans want to see him more in the offense. Simpson, a five-star in the 2022 signing class, took Westview High School to a state championship in his senior season. He tossed 41 touchdowns to three interceptions in 2021. Simpson displayed accuracy and playmaking abilities in spring practice.

It will be interesting to see how both grow in preseason camp, but Bill O’Brien has two candidates to work with after Young.