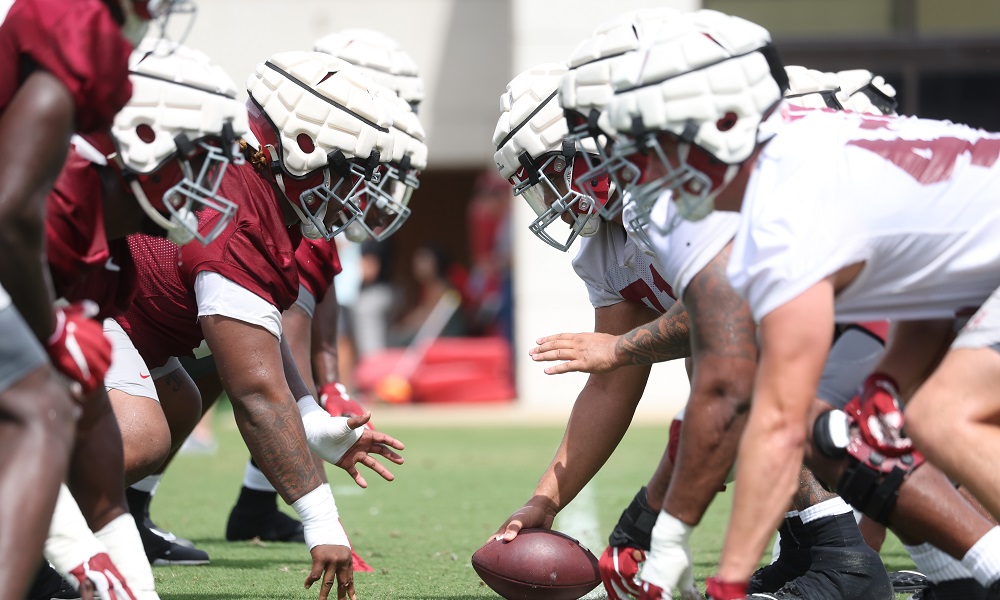 Alabama fans enjoyed the 2012 offensive line for its dominance to a BCS National Championship, but the 2020 group was good too.

The Crimson Tide carried an offensive front that allowed 13 sacks of Mac Jones, and Najee Harris had 1,466 rushing yards. Alabama’s physicality in 2020 propelled three Heisman finalists – Jones, Harris, and DeVonta Smith – and a Heisman winner in Smith. It lost Landon Dickerson, Alex Leatherwood, and Deonte Brown to the National Football League and fielded a few new faces up front last season. The Tide replaced Kyle Flood with Doug Marrone as its offensive line coach. Alabama struggled with consistency in having toughness and physicality in the running game and passing attack. Coach Nick Saban watched his offensive unit allow 39 sacks of Bryce Young, and there were times when Alabama could not run the ball effectively.

RELATED: Nick Saban doubles down on 2021 being a rebuilding year for Alabama: “Our standard is not like everyone else’s.”

Young became the program’s first Heisman-winning quarterback, but Saban wants a balanced attack. He is enjoying the hire of Eric Wolford from Kentucky for the line, but he wants a return of toughness and physicality up front.

“We need to play better on the offensive line,” Saban said in Thursday’s presser after the first practice of fall camp. “We need to be more physical up front and move on the run. We need to be more consistent, and I think having more diversity in the running game will help, and the additions we made in the offseason will help. Overall, we need to have a different mentality upfront with the intangibles we play with.”

Saban said toughness for this team starts with the offensive line.

“We need leadership so that the players understand the standard we need them to play to,” he said.

“Somebody is not going to accept that guys are not playing that way, but I like what we have. I like the attitude they have played with to this point. I like the coach we have now and his energy and enthusiasm. I like the additions we’ve made in the running game to add consistency, which will help play-action passes and other advantage throws we can make if we can run the ball effectively. It is what we need to improve on, but I am encouraged by it.”

Alabama’s offensive line has heard the negative all offseason about how it did not play to the program’s standard.

Some of the additions the Tide added in the offseason include Jahmyr Gibbs (running back), Miles Kitselman (tight end), and Tyler Steen to help with the rushing attack. The Tide has Seth McLaughlin, Darrian Dalcourt, Emil Ekiyor, Javion Cohen, JC Latham, Damieon George Jr., and Steen (transfer) battling for starting jobs. Dalcourt is pushing McLaughlin for the job at center.

Latham eyes a starting spot at right tackle, and Steen looks to earn the role at left tackle. George is trying to find a home as a starting guard or tackle. Tyler Booker, a five-star freshman, is also pushing for an opportunity on the line.

We will see how everything shakes out in preseason camp.